The Fat Lady Sings: 14 New Compositions for the Maestro Class 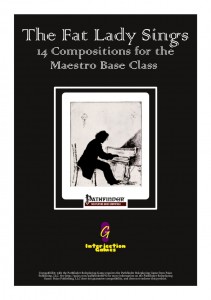 Interjection Games’ maestro is one of the more colorful, unique and awesome base classes out there and this pdf is all about additional fodder for these guys – clocking in at 5 pages, 1 page front cover, 1 page SRD, we get 3 pages of new compositions – but can they hold up to the base classes’ tremendous potential?

I’m assuming you’re familiar with how the class works; If not, check my review for a break-down of it. Got it? Okay!

So what do we get? Well, there would be for example 4 new intros. The first one would be the Anthem of the dutiful knight, which conjures forth an intangible spectral knight that readies an action to hit people trying to attack while remaining adjacent to you to attack the intrepid interloper. Balance-wise, here is an interesting innovation – using this intro reduces the amount of melody slots by one. Conjuring forth illusory doubles of allies within 30 feet also works rather neat. When invoking a song of friendship, maestros can highjack dominations and similar mind-influencing effects – awesome! Finally, maestros can use an into to annoy enemies with miss-chance inducing (get this!) sugarplums. Yes. Sugarplums. Cool! (I know, bad pun…)

A total of 9 melodies would be next –  one lets your allies emit AoE-demoralizing shouts that deal minor sonic damage, while another allows for rerolls for allies, for balance’s sake at -2. Yet another defensive melody can prevent flanking (ouch!) and another penalizes any attack on you or your allies within 30 feet with 1 point electricity and 1 point sonic damage. Might look like it’s not much, but believe me…these can accumulate. Another melody makes it possible for a maestro to help e.g. other elemental blasters by adding penalties to foes damaged by more than 5 points of elemental damage. A haunting tune to penalize fear-based saves would be more common…but Interjection Games’ trademark imaginative ideas are back with a miss-chance granting interposing musical notations (!!). Yes. Awesome. Though don’t expect these to catch giant’s boulders. Also cool – maestros may offer their will-save to allies, but if said ally fails, both are hit by the effect. Finally, what about a melody that allows you to once per round force opponents in range reroll their roll, but at +2? Rather cool!

Finally, there is one new eponymous outro – the Fat Lady cometh. It is awesome. You conjure forth a slow-moving, ponderous spectral opera singer that you can move around throughout the composition. She arrives with the intro and remains for the whole composition. In the end, she emits a shriek that AoE stuns opponents, but compositions that include her cannot be aborted prior to reaching the outro. Design-wise, this hints at vast untapped potential via other intros/melodies/outros and the imagery…is damn cool.

Editing and formatting are top-notch, I didn’t notice any significant glitches. Layout adheres to Interjection Games elegant 2-column standard and the pdf comes sans bookmarks, but needs none at this length.

This additional fodder for the great Maestro-class is simply glorious and hints at a lot of design-potential that could be explored here. The ideas are fresh, the wording is concise (in spite of rather complex concepts realized) and the added oomph makes the maestro even cooler – what’s not to like? Well, personally, I’m not too big a fan of the spell focus feat that acts as a prereq to many of the compositions. Yeah. That’s all the nitpick I’ve got here. A personal preference. Final verdict? 5 stars + seal of approval.

You can get this damn fine expansion here on OBS and here on d20pfsrd.com’s shop!