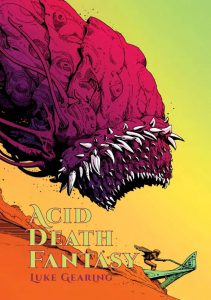 This review was requested to be moved up in my reviewing queue as a prioritized review by my supporters. My review is based on the print version, as I do not own the pdf.

The interior of the front cover is a nice, full-color isometric map depicting Shurupak, the most stable city ruled by the many-crowned monarch, and from this place sprawl the Thousand Sultanates, with their ever-changing identities, rulers and customs; the spread that includes the interior of the back cover contains a generator for these transient micro-states: With two d6 rolls, you can determine the title of the ruler, and two d6 rolls let you determine competing fads; the interior of the back cover also has 6 troubles afoot and a list of stuff to do.

Beyond these sprawls lie the wastes, where the worms exist and dune-riders (as seen on cover) roam; four-armed metal-workers rise from duneholds to sell exquisite merchandise; in the North, the verdant jungles are the territory of the Azure Apes; the old steel gods that wrought the apocalypse lie to the west, and to the east, the massive plastic sea looms, where the Coated Men travel to have their skin coated in plastic…which promises power, but also an early grave.

If all of this sounds impressive, then because it damn well is just that; this introduction to a campaign setting of sorts is provided within the first two pages, and it had me STOKED.

The remainder of the book contains a total of 36 backgrounds (on reddish pages), and 36 monsters/NPCs (on greenish pages). The aesthetic, as you probably have determined right now, is one of very long after an apocalypse, with a quasi-techno-magical touch and aesthetics deeply infused in (stoner) doom aesthetics, blended with Heavy Metal F.A.K.K., minus the sex/adult angles. Add a touch of Dune, et voilà.

Now, as for the backgrounds, it is very much recommended that the GM read them, for much of the lore for this setting (?) is implied in the backgrounds. Aforementioned Coated Men, for example, are one background, and their text obviously implies that the Plastic Sea mentioned in the intro isn’t instantly fatal at least, and instead serves some weird, quasi-religious function. And WEIRD is allcaps, throughout: For example, one of the backgrounds makes you one of the last Bear Men. You see, Bear Men became somewhat anti-natalist and depressed as a culture, but the background, the Shaved Bear, rejects that, brimming with hope. Yes.

You can play a shaved bear person. The design of the backgrounds is generally pretty well-rounded, and features some interesting ideas, like e.g. a lizardfolk species’ cold blood represented by a reduced number of tokens in the stack if you’re too cold. You might be a worm-rider, a survivor of the old world, or perhaps you’re one of the agents (current or former) of the freshwater grubs. Possessions and skills generally serve alongside special abilities to render the overall power-level within the rather broad parities that Troika allows for; in contrast to many other supplements I’ve read, the backgrounds here feel pretty well-rounded and playable.

The monsters all obviously come with their stats and mien, and include murder cacti, scorpions and various lizards. Of course, the horrible mastermind freshwater grubs (think human-faced grubs in freshwater tank/thrones) are included here with a brief plot-generator, and we learn about dunesharks and beetles that carry massive ultra-hard papier-mâché tower-crèches. Several of these creatures do some neat things with Troika’s basic rules-chassis, for example when it comes to a kind of escalated damage chance. From nanosands to the last hover-tank Hyperion and ancient robots, this book manages to provide an amazing INDIRECTLY-defined backdrop.

And I wish it didn’t have that “IN”-prefix. But that belongs in the…

Editing and formatting are very good on both a formal and rules-language level. Layout adheres to a one-column standard, with page-use different between sections: Around 1/5 of the page tends to be empty on every 3third or so page, since there (usually) is 1 background per page, sometimes 2; in the monster section, there often are 2 critters per page. The full-color artworks by David Hoskins rock and adhere to the same style you see on the cover; artworks are expensive, so I get why there aren’t more (there already are quite a bunch of them!), but for the bestiary in particular, it’d have been awesome to have an artwork per critter. The hardcover is really gorgeous, with sewn binding, color-coded pages, name of the book on the spine; all in all, high quality.

Luke Gearing does a fantastic job at indirect world-building herein, mostly via backgrounds and monsters; while that worked, kind of, to establish Troika’s aesthetic in the core book and hint at the weirdness of the humpbacked sky, this book presents a more conventional (and, to me, more accessible!) campaign setting that ticks off a TON of my “OMG, HOW COOL IS THAT?!?”-boxes.

Alas, this more grounded setting also perfectly highlights the grating effects of this indirect narrative approach; you don’t read a cohesive sourcebook; instead, you have to piece together setting-information from backgrounds and monsters; there is no place that really explains how anything really works in this world. The setting is as ephemeral and disjointed as the hallucinogen-induced visions that inspire its amazing aesthetics, providing only the barest minimum of contexts, and spreading these contexts out to boot. This would be less of an issue in a super-abstract setting, but in one that is pretty consistent in its themes, it does mean that the GM should probably take notes while reading backgrounds and monsters.

And don’t get me wrong, I am very much aware of the design-paradigm here: “Insinuate, hint, inspire the GM!” Good idea, but it works better if there is a functional skeleton to wrap those insinuations around. Acid Death Fantasy genuinely infuriated me when I realized that a paltry 1.5 pages of brilliant setting would be all I’d get, and while I appreciated and genuinely loved “discovering” more details when reading the backgrounds and monsters, I proceeded to become even more annoyed when I realized that these pieces of information were strewn about like that.

In short: As a person, I absolutely LOATHE that writing this evocative, this inspired, chooses to hamstring itself by adhering to a mode of information presentation and design focus that sells short its brilliant setting.

As an analogy: This is a bit like one of those campaigns where you get a player’s book with basics and hints, bits of lore strewn about, and a GM book that features the monsters and actually provides the information that lets you properly run an immersive game in the setting. Only in this instance, the information that lets you have an easy time running the setting has been cut, and your monsters have been grafted into the player’s guide.

I know next to nothing about Shurupak. Power and Water are leitmotifs of the setting (even set in title case + italics!), but what to do with that? No clue. The bird-like warflock and their culture, the coated men…there is so much greatness TEASED at. In a sentence or two. The barest of minimums of contexts given. Enough to make you want more.

…and enough to frustrate me to hell and back. Where’s my actual setting? Yeah, I am probably intended to improvise that and cobble it together…but I don’t want to.

As a person, this book pisses me off for what it could have been if presented as a more traditional setting, perhaps cutting a few of the less-inspired backgrounds and monsters (which, admittedly, are the exception). As a person, I probably wouldn’t get this again, as all its promise remains just a tease for me, the equivalent of creative world-building and lore blue balls. For me as a person, this is a 3-star book at best.

Then again, if you hate it when settings come with consistent lore and define/explain their concepts in more than rudimentary hints, then this might be exactly what you’re looking for; it is probably with you in mind that this was written!

However, as a reviewer, I try to rate books for what they are, and not for what I want them to be.  And frankly, if you love aforementioned indirect approach, if you want your settings to be fragmentary, full of high-concept tidbits, then this will be right up your alley. In fact, if you didn’t mind these issues in the core Troika book, and figured that the setting in “Fronds of Benevolence” was almost too well-defined, then this will be pure gold for you.

When viewed neutrally, then the whole cadre of backgrounds can be considered to be well-rounded and versatile indeed; the monsters, similarly, are often inspired and endeavor to do interesting things with Troika’s rules-lite chassis. The only neutral gripes I can field against this would be the rare less inspired background (like the hermit, who gets 4 Philosophy and three 2 random spells, no possessions. Boring.) or monster (ruin degenerate being a particularly bland one). That being said, for each such outlier, there are at least 2 great ideas that send the synapses firing.

And considering all of that, it wouldn’t be fair to rate this anything other than 4.5 stars, rounded up. This book may not be for me, but you might adore it. Oh, and if there ever is a “proper” setting book for Acid Death Fantasy, I’ll gladly back the hell out of it.

You can get the pdf-version (probably what I’d be going for) here on OBS!

The hardcover (if the approach appeals to you) can be found here on Melsonia (UK), and here on Exalted Funeral (US), or here on spear witch (US). (Note, as per the writing of this, the book’s sold out in the US.)

If you found this review informative, please consider a tip via paypal, or joining my patreon here. Thank you.