Files for Everybody: Arcana Feats (PF2) 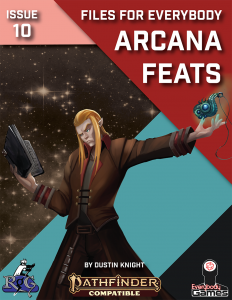 This installment of the Files for Everybody-series clocks in at 7 pages, 1 page front cover, 1 page editorial, 1 page introduction, 2 pages of SRD, leaving us with 2 pages of content, so let’s take a look!

Okay, so in this installment, we deal with Arcana feats. The pdf features 2 skill feats for second level, 1 for fourth level, 4 for seventh level, and 2 feats for fifteenth level.

The first of the second level feats is Discern Arcane Creatures and lets you “Recall Information” (should be Recall Knowledge) about beasts, constructs or dragons. It’s, of course, properly tagged as secret. Expertise lets you choose a trait that’s associated with a skill you’re an expert in. When you encounter erroneous information about the chosen subject matter, you get a secret roll from the GM, with proper success/failure conditions noted. A handy table lists the respective material.

The level 4 feat Exploit Anatomy requires Expertise. Select one creature you can Recall Knowledge about them; if the chosen creature has an ancestry trait or creature trait you have chosen with Expertise, you treat their resistances or hardness by 2 for one minute; master rank enhances that to 4, legendary to 6.

The level 7 feats include Dragon Hunter. This feat reduces dragon-induced frightened condition value by 1 and nets a +1 circumstance bonus to saves; legendary increases the benefits to 2. Fuel Ritual requires master rank in Arcana, Occultism, or Religion. The feat enhances, bingo, rituals: When you’re the primary ritualist for a ritual with a spellcasting tradition associated with a master rank skill (Arcana, Occultism, Religion), you can expend a spell slot of a level equal to or higher than the ritual’s level to expedite the casting time of the ritual by 1d12 hours; if the spell-level expended is twice the ritual’s level, the reduction is 1d12 + 6 hours instead, but regardless, the ritual’s casting time can’t be reduced by more than half. The feat also properly presents rules for multi-days rituals.

Spell Connoisseur builds on Recognize Spell, and nets additional information, as well as some new pieces of information for critical successes, including additional components, metamagic, etc. The feat is per se nice, but I’m not sure I’d consider it worth a feat. I also don’t particularly like that the feat lets you potentially determine the language of verbal components.

Spellsense builds on Arcane Senses and nets you spellsense as a vague sense; illusion can only be detected with Seek, and in conjunction with detect magic you can notice lingering auras that were there within 24 hours, 30 days if you’re legendary. I like this one, but t does mean that the GM needs to consider quite a bunch.

The two 15th-level feats include Dragon Slayer, which builds on Exploit Anatomy and may be used as a reaction. When you use Exploit Anatomy against a dragon and have a success or critical success, you impose a status penalty on the dragon and it loses status bonuses to AC and saves, except those gained from spells. Also usable as a reaction would be Sabotage Construct, which follows a similar design-paradigm and can stun constructs and force them to take actions on your behalf, with the check required properly codified. However, there is a bit of confusion here: The feat seems to have once been called Override Construct, and one such reference is still here.

Conclusion:
Editing and formatting is good on a formal and rules-language level; the glitches here and there aren’t significant. Layout adheres to a two-column full-color standard, and the artwork is nice. The pdf has no bookmarks but needs none at this length.

Dustin Knight’s Arcana feats are interesting, if perhaps not world-shakers. For the low asking price, this is certainly worth checking out. That being said, I wasn’t really blown away by this one. I think this is worth 3.5 stars, rounded up due to the low price and in dubio pro reo.

You can get these solid feats here on OBS!

You can directly support Everybody Games making their own super-promising RPG, Eversaga, here on patreon!

If you enjoy my reviews, please consider leaving a tip via paypal, or joining my patreon here. Thanks!