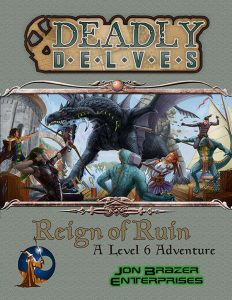 This module from Jon Brazer Enterprise’s „Deadly Delve“-series for experienced groups clocks in at 34 pages, 1 page front cover, 1 page editorial, 1 page SRD, 1 page back cover, leaving us with 30 pages of content. It should be noted that the pdf comes with an extra-pdf that contains properly-sized, big versions of the maps – these are key-less and generally player-friendly – with one exception: There is a “S” denoting a secret door left on one of them.

As you can glean from the cover, the OSR-rule-set employed in this version of the module would be Frog God Games’ Swords & Wizardry. We get both ascending and descending AC-values.

All right, so this adventure begins with a ranger collapsing, talking about the village of Northam being razed to the ground – one of multiple settlements adjacent to swampy terrain. Trying to warn other settlements and find out more, the PCs will soon, in Mistlevy, happen upon their first massive fight – with the lizardmen of the Ixtupi tribe – a somewhat quasi-Aztec vibe accompanies them and their culture as a leitmotif, but more on that later. To their shock, the PCs will encounter a deadly black dragon crash into the clash between the elite Stormhammer guards and the Ixtupi. Thankfully, this dragon, quite possibly the commander of the lizardfolk, does retreat – and she has an agenda. Which brings me to a problem that’s somewhat inherent in the system and the faithful version to the system: In S&W, dragons can be pretty fragile – and compared to her servants, the dragon boss of this module unfortunately adheres to this formula; here, a deviation from the standard rules to account for her boss-nature would probably have made sense.

Still, this leaves the PCs without much recourse – they need to stop the black dragon, asap! Thus, they venture deeper into the marshlands towards the temple of the Ixtupi. Tsiikil lizardfolk can provide support and directions, should the PCs help them. The temple of the Ixtupi is a foul stone pyramid surrounded by a great moat – to even get to it, the PCs will need to deal with potent, dragonblooded lizardfolk; the presence of stormwyts, an alkaline-spit-using wyvern-variant adds a further danger – and woe if the PCs start using elemental magics: The taint of the place causes such magic to spawn tainted elemental spirits…

Breaching the temple is already a feat in and of itself – but exploring the dungeon will not be simple, either: Here, Ixtupi priests, mud-caked lizardfolk zombies, kobold trappers, spirits, mummies and even a dire venus flytrap, stand between the PCs and progress – but to reach further below, the PCs have to pass the mosaic pillar chamber – where multiple unique beasts spring forth from the pillar…and that’s before the traps, which make this transitional area a really nice gauntlet.

The bulk of Ixtupi resistance can be encountered in the lower temple – here, the most potent of the tribe await – alongside glass golems, demons, evil idols boosting the foes of the PCs…and even a half-dragon gynosphinx – and yes, she comes with sample riddles. Ultimately, past all the traps, the PCs will have to delve deep into the place where caustic water and grueling sights await and face Nyrionaxys II…if they don’t fall prey to the hatchling ghosts of her brood mates or the half-draconic anaconda. Or the stormwyts…and yes, all of this doesn’t sound so bad, right? Well, here is a big difference to almost all adventures featuring dragons: Nyrionaxys II doesn’t wait to be slain. A full page is devoted to tactics of the mighty dragon. Still, while S&W obviously uses smaller numbers and her AC and defenses are impressive, at 32 hp, the dragon still remains comparatively fragile.

Speaking of monsters – the stat-conversions to S&W are solid, as far as I’ve seen. Spell-names are adjusted, etc. Big plus, btw.: The hoard of the dragon, while massive, is WBL-appropriate and shouldn’t pose a problem for ongoing campaigns. In fact, being mostly copper, transportation may yet pose some interesting problems…

Editing and formatting are very good. I noticed no serious accumulations of either formal or rules-language glitches in the module. Layout adheres to a really nice two-color full-color standard and the pdf comes fully bookmarked with nested bookmarks for your convenience. The maps featured for all major sites are solid and full-color; apart from the minor tarnish of the remnant secret door-relic mentioned before, the inclusion of player-friendly maps is another big plus. The OSR-conversion to S&W is solid and generally well-crafted.

Richard Moore’s “Reign of Ruin” was an honest surprise to me: You see, there are two basic dragon-module set-ups (not counting random encounter dragons): The long, epic one, wherein you defeat a dragon at the end, after much hardship, and with the exact goal of defeating the draconic threat; and the briefer one, where a dragon at the end is basically the boss. The first tends to be represented by mega-adventures, campaigns, etc.; the second by smaller modules. Both have one thing in common: Most of the time, the dragons in them are DUMB, character-less engines of destruction, when ostensibly, they are supposed to be really smart. This module, thankfully, gets that aspect right: The dragon herein is an interesting character, embedded in a dungeon and social environment with an interesting leitmotif; she makes sense. Her proactive strategies can allow the referee to unleash hell upon the PCs and vanquishing her doesn’t break ongoing campaigns – the rewards are significant, but won’t break the game.

In short: While this does not reinvent the wheel, it’s one of the few anti-dragon modules that did not cause my brain to hurt at one point – and that’s a big, big plus. A minor issue of the S&W version, at least if your PCs are lucky, may be the relative fragility of the boss – but that’s something inherited from the system. Still, compared to the other versions, I feel that this version is slightly less compelling – mainly since the versions for the other systems work so well due to the mechanics; to make up for their brevity, more flavor and/or bonus-content for the OSR-version would have been nice. Hence, my final verdict will clock in at 4 stars.