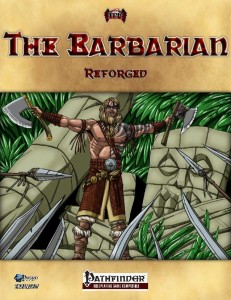 The second of TPK Games’ redesigns of base classes clocks in at 17 pages, 1 page front cover, 1 page editorial, 1 page advertisement, 1 page SRD, leaving us with 13 pages of content, so let’s take a look!

All right, so let’s dive into these guys – the reforged barbarian receives much the same stuff you know from the base class – but with some modifications. First of which would be the addition of survival and stealth to his class skill list, which makes sense to me – lore is rife with suspicious barbarians that prowl the less civilized lands. In an uncommon twist, ref-saves have been upgraded to a medium progression – while not standard for class design, that is not a paradigm I’d consider sacrosanct – so yes, interesting.

Now in a rather interesting take, TPK Games have eliminated the movement bonus the standard barbarian receives in favor of a bonus to movement when charging, including a further increase in str-mod by half when charging for devastating charges. While this makes low level charge-builds exceedingly lethal, per se not something I’d consider broken. It should also be noted that reforged barbarians receive mobility at 5th level. In an interesting take, rage now has a fortitude save to prevent the temporary fatigue at the end of the rage – per se another choice that may add a small bonus, but not one I’d consider problematic.

As a variant to rage, whirling frenzy is provided – this nets the barbarian +4 to str (untyped, should be morale analogue to rage), +2 dodge bonus to AC and ref-saves and essentially allows him to flurry – +1 optional attack in full attacks, but at -2 to all attacks, INCLUDING AoOs the bonuses sclae to +6/+3 and +8/+4. Additionally, the barbarian does not receive indomitable will, but does receive evasion while in a whirling frenzy. This variant provoked a knee-jerk “OMG, OP”-reaction from me that was only partially justified. While the flurry is extremely strong for a full BAB-class and the bonus-type glitch sucks,, the lack of con-bonus means that these barbarians are more fragile. In the end, testing did show that due to proficiencies etc., this does not break the game, though it is a pretty strong option that is not for every game. Still, apart from the bonus hick-up, not something I’d condemn.

Trap Sense is modified into danger sense, granting a bonus to perception as well as the minor bonus to ref-saves and AC versus traps. Damage reduction is moved down from 7th to 5th level, +1 every 4 levels thereafter (not an issue since DR is probably the most overrated rules-component in PFRPG) and instead, at 7th level, the reforged barbarian receives Diehard hard-coded into his frame-work. The higher levels remain untouched, ability-wise.

We also receive a host of FCOs, -which are pretty cool – reduction of AC-penalties for drow, more claw/bite damage for catfolk, better mobility AC-bonus in dim light for fetchlings -the FCOs tie into both race and class and make sense and rank among the best examples for them. The one for (half-) orcs deserves special mentioning – +1 round rage per level feels very strong to me. I would have gone at least +1/2. Thene again…half-orcs are one of the notoriously weaker races, hence the ability to excel at arguably their iconic class may be in the realm of what one might consider valid.

A new archetype is also included, the cannibal. Instead of charging strike, these guys receive a secondary bite attack. Additionally, they may eat the heart (or what passes for it) of a fallen foe slain in the past minute to regain hp or rage rounds equal to their HD – before you pull out the kitten-bag: Yes, they can eat kittens since the mechanic is tied to their own HD, not the one of the enemy, but a daily limit prevents the ability from being broken. It’s not as elegant as it could be, but it works.Imbibe Spirit uses a similar mechanic, but the actual bonus it grants has been lost to a formatting glitch – I have no idea what the ability does. Consume Vigor grants fast healing equal to the creature’s HD, but fails to specify how long it lasts – two unfortunately massive glitches that render a cool archetype unusable as written.

A total of 33 new feats are provided – they range from damn cool to broken as hell: Take Butcher’s Blade – whenever you hit a foe with power attack, you receive a swift action, AoE-intimidate check to all who see you within 30 ft. Usually, AoE-demoralization is a class feature, not something that can relatively cheaply be bought as a feat. Brotehrs of Steelwould be another example – while awesome, it simply is too strong – choose one ally at the begin of any combat – as long as one of you isn’t flat-footed or flanked, neither is the other – this is much more powerful than many a teamwork-feat option and probably should be remade as one – as soona s two characters require this feat, it would make more sense/feel more balanced. The Camel Punch-feat that increases the damage dice of unarmed strikes by +1 should also be kept out of the hands of monks – A default strategy to improve damage output for these guys is size-increase and stacking +1 size on that via a feat is just nasty. Especially since another feat allows you to be treated +1 size when charging – do you see the stacking insanity…yeah…not gonna happen anywhere near my game.

Interesting, though quite some work to track, would be “Deep Wounds” – the bonus damage from power attack has its recovery rate reduced to only 1 of these hp per day – while not feasible for every campaign, especially low magic campaigns will enjoy this one. Eyes of teh Jaguar would be weird – the feat nets you low-light vision 30 ft. Problem being – low-light vision has no range. You either have it, or you don’t. Darkvision has a range, though…so which is it?

Improved Diehard is a rather weak feat that could use a power-upgrade – not dying until you reach negative con + 1/2 level isn’t that impressive; Here, for once, I would have went full level. Improved Mobility is BROKEN – it eliminates AoOs from threatened squares. Flat-out. One caveat – if you lose dex-bonus, are slowed, staggered etc., you also lose the benefit. Still, this is weird – it invalidates mobility and its increased emphasis in the reforged barbarian – this feat needs to die a fiery death. I do like the feats that allow for a bonus to str and con-checks, since both usually receive no love whatsoever. A cohort-less variant of leadership with twice the number of followers, based on str, should be interesting for humanoid warlords and str-based weapon-hurling is also okay. I also like the counter-power attack-feat that negates the bonus granted by power attack, unlike the foes combined BAB+str-mod is 4 higher than yours – interesting mechanic to counter one of the most used feats. Savage Strike allows you to trade in AC for damage-boost, which si also an interesting option. Unquenchable Flame is another feat, which, while high in concept, needs nerfing – once you run out of rage, you may continue raging, but are shaken and receive 3 points of non-lethal damage per round. Infinite rage at level 5. When rage-rounds are quite often used as the resource for rage powers, feats etc. – so, does the barbarian still count as having rounds of rage left, or is only the rage maintained? If only the latter is the case -all right.

The pdf also provides a total of 15 new rage powers: +2 damage versus foes below 50% max HP smells of 4th edition’s bloodied condition to me and requires tracking, so not a fan of that one. On the other hand, Favor of the Forebearers is awesome – as a swift action, you may expend one round of rage to invoke the forefathers and add the ghost touch property to your weapon for one round. Using rage to temporarily boost ref-, will- or fort-saves, critical confirmation rolls, less duration of charms if your indomitable will doesn’t do the job. On the nitpicky side, 3 rounds of rage for turn undead may be a cool option, but the wording “as a cleric” is misleading – turning undead requires a feat that not every cleric has. conical AoE sonic damage for rage rounds also makes sense to me and the level cap prevents abuse and to explicit novas. Using immediate actions and rage to negate 5 points of damage received also is a neat one, as is the option to temporarily boost DR and even grant yourself fortification. Generally, these rage powers include some cool gems.

Editing and formatting are this pdf’s weak points – while generally, there are not many glitches per se, the archetype is ruined (which is a damn pity) and quite a few feats should not have went even past a fleeting mechanical editing. Layout adheres to a printer-friendly two-column standard and the pdf comes with nice b/w-stock art. The pdf comes fully hyperlinked and bookmarked for your convenience.

I did not look forward to this review. After the balance disaster of the Reforged Cleric, I did dread this one. This pdf is the labor of lead designer Brian Berg, with additional content from PJ Harn, Jason Linker, Ben Kent, Kevin Mickelson and David Miller and the pdf reflects that – quality, alas fluctuates from “glorious” to “awful.” First the good news: The reforged barbarian is actually a cool alternative. It may be a tad bit stronger than the standard barbarian, but not by much and all changes make sense to me – they enhance the fluff and feel of the class. So if you wnat this pdf for the variant class alone – go for it!

Alas, the supplemental content is a mixed bag – from the cool, but unusable archetype to feats that range from cool to “Does the designer know which system he’s designing for?” to the rage powers, this pdf’s issue can be summed up in one sentence: Lack of a developer. The disparate voices and wildly fluctuating quality of the writing means that this pdf does have some awesome, glorious pieces of crunch that will most definitely see use at my table, but also that it features some horribly broken bits and pieces that need to be plunged into the deepest pits of the abyss. With a bit more care, this pdf could have been a 5 star + seal of approval book; It has all the makings of one. Alas, the at times sloppy fine-tuning has taken that away. Try as I might, as much as I love the base class, the ideas herein – with this amount of flaws, I cannot go higher than 3 stars. As a grab-bag and for the base class, definitely worth the low asking price, though.

You can get this alternate take on the barbarian here on OBS and here on d20pfsrd.com’s shop!