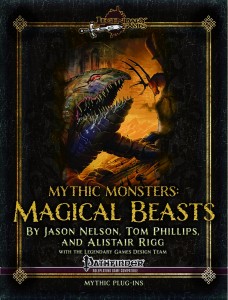 So this time around, we’re taking a look at magical beasts – monsters in the truest form and some of the most iconic creatures of our beloved roleplaying game – but before we go into the meat of these beasts, we first receive mythic feats – a lot of them! 10 to be precise, and while some have been released before in Mythic Minis, their inclusion herein helps render the respective creatures more memorable. The Rending Fury tree and Pack Attack, as some of my favorite monster feats for bestial builds receive mythic versions herein.

From the first page of these beasts, you’ll notice something – layout has been streamlined – when possible, two creatures now fit on one page, making the pdf more printer-friendly and less blank-space-prone than previous installments of the series – kudos for that! The first page thus is shared by the mythic Basilisk at CR 7/MR 3 and the mythic Behir – the latter lacking the CR-entry in the header. Mythic basilisks receive a damn cool caveat for their petrification – the poisonous blood of the creature can revert it! Behir breath reducing you to 0 Hp now utterly evaporates the unfortunate victim and their constriction is particularly nasty – especially since it can essentially AoE-constrict – glorious. It should also be noted that many creatures herein, including the Behir, receive alternate versions with e.g. the giant template applied or without them, in cases where the template has already been applied in the main statblock.

The CR 9/MR 3 mythic Bulette also receives these two versions – as savage feeding machines, not even mind-influencing effects can calm these beasts and their crushing leaps and magic resistant plates make for a cool protection. CR 8/MR 3 Girallons also receive this dual treatment and are just superb at rending foes apart, being even capable of rending off the heads of creatures – nasty!

Also at CR 8/MR 3, but sans the second version, the Dragonne may induce fatigue with roars and exhale breaths of sleep-inducing gas. Speaking of bad breath – the CR 15/MR 6 mythic Catoblepas has a slay living gaze, a horrible stench AND poison breath.

On the lower ends of the CR-spectrum, we receive Jacklweres at Cr 3/MR 1 receive a sleep aura and more alternate forms – okay, but not on par with the CR 1/MR 1 mythic…stirge. Diseased, able to bloat themselves with negative HP and swarming, these are a great example for low level threats. CR 5/MR 2 Perytons may rip the hearts out of living foes for mythic power and buff itself by flying over the shadow of targets – iconic, cool – two thumbs up!

The CR 6/MR 2 Leucrotta receives a mass suggestion-inducing whisper and they also receive a CR 5/MR 2 Crocotta-servant and the option to easily destroy objects.

The CR 21/MR 9 Thrasfyr enhances the cool tricks they can accomplish with their chains and get in a telepathic bond with a chosen, willing master. Per se, a nice beast, but some slightly more far-out abilities would have been appropriate and nice here. The Ypotryll at CR 18/MR 7 is all about deadly charges that rock the ground, ignores object hardness etc.

This issue’s new creature would be the CR 5/MR 2 warpwolf – the nasty relatives of blink dogs, these creatures exist in a constant transplanar-flux that allows them to entangle foes with their innards, use teamwork feats solo and attack from different directions – and yes, that’s only the tip of the iceberg. Once in a while, one stumbles over a design that is simply inspired and this is one of them – even among all those canine foes, the warpwolf stands out and puts to shame his hellhound, yeth hound etc. brethren – it’s glorious in so many ways, in spite of its relatively low CR – brilliant!

Editing and formatting are better than in the giants book, though I noticed minor glitches here and there – nothing too serious, though. Layout adheres to legendary Games’ two-column full-color standard and is much more compact than usual – less blank space – more printer-friendly: Kudos! The pdf has no bookmarks, though, which constitutes a comfort-detriment.

Jason Nelson, Tom Philips and Alistair Rigg had an interesting task here – amp up these beasts without making them too flexible – that would contradict their bestial nature. Hence, while they do not sport as many unique abilities, those that are here have to count – and oh boy do they count: From the Peryton’s proper heartrend to the behir’s AoE-constriction (which finally makes this guy distinct) up to the superb and gloriously illustrated warpwolf, these beasts rock hard. The warpwolf in particular is just awesome, the type of critter that makes you light up, even after having read 2 bestiaries before that.

That being said, I still maintain that this time around, oddly, the high-CR-beasts feel a bit blander than usual for Mythic Monsters – when compared to their brethren in the book, their tricks feel more like linear progressions and don’t add that much to the critters. This is me complaining at a very high level, though and in conjunction with the missing bookmarks the only reason I’m omitting my seal of approval. My final verdict will be 5 stars – now excuse me, I have to replace a lot of canine, lame foes with warpwolves…

You can get this damn cool bestiary here on OBS and here on d20pfsrd.com’s shop!