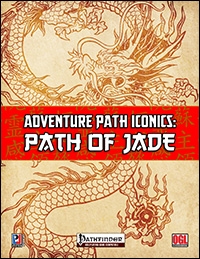 This collection of pregens for the Jade Regent AP is 29 pages long, 1 page front cover, 1 page SRD/editorial, 1 page caravan-sheet, leaving us with 25 pages of content, so let’s take a look!

Now this is the second set of pregens that a 3rd party publisher has released for the Jade Regent AP and hence, I’ll compare how it fares with Imperial Heroes by Legendary Games. That out of the way, we get a short introductory page that explains how Paizo’s intellectual property is maintained before providing us with the first character – Chan-Ona, a cynean wizard who may seem ponderous, but in fact is a brilliant scholar with a good heart. Cyneans, btw., are one of the races introduced in the NeoExodus campaign setting by LPJr Design – Essentially, Cyneans are magically-adept crystalline humanoids with a rather massive physical build. Now, half of the characters se these NeoExodus-races, while the other half are human characters. Whether you like the new races or not somewhat influences thus how you useful this pdf is for you as the races per se are not per default part of Golarion and is something you should be aware of.

That out of the way, the characters all come with original, full-color mugshots, a sample quote and are structured thus One the first page of a character’s depiction, we get the mugshot and crunch information/statblock. On the second and third page, we get advice on roleplaying advice, background, physical description etc. as well as level progression advice of up to 4th level and information to scale the 20-point builds up to 25-point builds or down to 15-point builds. The final page of a character usually has some free space as well as a transparent version of the character’s mugshot enlarged in the background. As a final note to Cahn-Ona – I’m not a fan of his name. The -chan-suffix is usually belittling/familiar in its use in Japanese and if my very rusty and rudimentary Japanese doesn’t deceive me “Ona-” as a suffix denotes something akin to honor, which doesn’t fit together that well for the character. I know, that’s nitpicky, but -chan is one of the most recognizable syllables in the Japanese language and its inclusion in the name slightly bugs me.

The second character is one Chelish alchemist named Colm Durban, who has a nice easteregg-nod in his background story to a certain event involving giants as depicted in Rise of the Runelords -nice! Not particularly versed in social graces, he is a brilliant bomber nevertheless – compelling character! Dorozan Alned Jawal is a Gevet, NeoExodus-nomenclature for Tiefling – and he looks the part: Horns, black and red eyes, he looks extremely badass and that contrasts nicely with his lingering childhood crush, heretical views (which are explained – a plus!), witch class and included scorpion familiar-stats.

Horse-Breaker is next up, an Enuka fighter. Enuka are beast-men of NeoExodus that may sport an incredibly wide variety of mutations, this one looking somewhat simian and coming with an increased physical stature that makes using large weapons possible -OUCH! I quite like this character, but his final age is only his scaling information – a bit of a pity, I would have enjoyed slightly more information on this character.

Saiyeth Inissi, best friend of the destined empress and Taldan Zen Archer monk, makes for the next character and an interesting combination of stemming from a wealthy family and being kind-hearted as well as a monk. Neat combination!

The Prymidian cleric of Desna, Talar Meda belongs to a race of beings suffused with linguistic powers and arcane polyglots and she combines this ancestry with being a rather forceful personality, often cursing in her obscure native language.

Valentina Yeris, a Varisian rogue (acrobat) is next up and her artwork and cheerful manner should make for a nice character especially if you’re not that into the brooding hero type – reading her entry, at least, made her sound fun to me. The final character in the collection is one Vash Kandar, whose artwork reminded me of Mitsurugi from Soul Blade/Calibur – and that is a good thing, for the man is a Varisian Samurai – how that works? Well, after a youth of crime, he was taken in and schooled by an aging samurai, again tying hsi background-story in with the history of Sandpoint via a traumatic incident. Also rather neat: We get a fully-described code for Vash and a cool discrepancy between his  honorable  samurai-class and his somewhat crude utterances. Nice one!

Editing and formatting are top-notch, I didn’t notice any significant glitches. Layout adheres to a glorious, original and professional full-color two-column standard and as mentioned, the artworks are glorious indeed and make for beautiful complements to the pdf, bringing the characters to life. The pdf comes fully bookmarked with nested bookmarks and in two versions, with one being more printer-friendly than the other one. Sooo…how does this stand up to Legendary Games’ pregens?

Now let’s compare the formal criteria, shall we? Whether you prefer Imperial heroes’ full-body artworks or the mugshots of this pdf, artwork-wise, they both range in the highest echelons – you’ll rarely see this well-crafted artworks in any publication. While the Legendary Games-product has slightly more detailed progression-suggestions, a big pro in favor of Adventure Path Iconics is that we get advice on scaling the characters up to 25-point-buys, something absent from legendary Games’ offering. That one, though, has slightly more archetype usage – but LPJr Design’s iconics uses the more interesting races. Both pdfs feature characters that deserve the name – with codes, complex personalities, easy tie-ins into the AP that link them to the characters and both have characters I wouldn’t hesitate using as a DM. Adventure Path Iconics has no hyperlinks, though it features a samurai code.

I honestly didn’t expect this, but in the end, both are on par with each other, delivering top-notch content for a fair price and if you’re looking for pregens, your class preference will probably be the deciding factor.

For this collection of pregens, my final verdict will also be 5 stars.

Check out these iconics here on OBS or here on d20pfsrd.com’s shop!