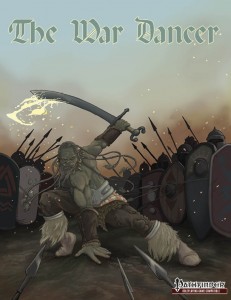 After a short fluffy introduction, we’re introduced to the new War Dancer base-class – so what is it about? Crunch-wise, it gets d10, 4+Int skills per level, full BAB-progression, good fort- and ref-saves, proficiency with simple and martial weapons and shields, but not any armors. In case you haven’t guessed – analogue to the monk, when unarmored the war dancer adds his wis-mod to AC and CMD and starting at 3rd level and every 4 levels after that, s/he increases the AC-bonus further by +1 and also works versus touch attacks. Also, at first level, a war dancer chooses one type of damage – slashing, piercing or bludgeoning – and gain proficiency with all exotic melee weapons that deal this type of damage: A rather cool design decision here.

But what would a war dancer be without dances? Starting at 1st level, war dancers get 4+Wis-mod rounds of dance per day, further increased by +2 rounds per level. Starting a dance is a swift action and nets the benefits of the basic step of the respective dance and entering a higher level step of a dance is a swift action as well, while stopping a dance is a free action. But what are these dances? Well, War Dancers start the game with one known dance and learn additional dances at 4th level and every 4 levels afterwards. A total of 13 different war dances are provided – but how do they exactly work?

At first level, a basic step becomes available for the war dancer, at 5th level, s/he learns to enter the advanced steps of his/her war dances. At 13th level, the final step, the expert step of the respective dances becomes available – though all steps need to be activated in succession, always going the route basic, advanced, expert. At 9th level, two dances may be active at the same time, at 17th level even three ones.

So what do these dances do? Well, let’s take a look at the first one, the Dance of Earthbreaking: Basic steps add +1d6 acid damage to melee attacks. The advanced step allows you to emit a shockwave as a standard action that knocks creatures up to 60 ft away prone whereas the expert step allows the war dancer to open up pits, grow walls out of the ground, create a stone dome, shape earth or move the earth. As you may have guessed, there also is a flame-themed, a water-themed and an air-themed war dance, but that’s not all: Take e.g. the disruption dance, which penalizes the attacks of foes from all your threatened squares by -2, increasing it by 1 for every 5 class levels. As advanced step, the war dancer makes all threatened squares cost twice as much movement and as expert step, a -1 penalty (+1 for every 5 levels) to AC and saves further makes being around a hostile war dancers, especially those with ranged weapons, an unpleasant proposal.

Beyond these, there also is a duel-centric war dance, but more interesting would probably be the force blade dance, which increases the range of your weapons, cutting/damaging foes usually beyond your reach – and actually gets different advanced and expert steps depending on the style you chose at first level – while the elemental dances were cool, this one actually does something rather different and offers solid mechanics to back its iconic concept. Two thumbs up. Going more offensive with the forceful dance is also possible.

Also interesting regarding tactical options is the harrowing dance, which allows you to forego melee damage in favor of causing your foe to temporarily become flat-footed – your rogue ally will thank you… Sickening, deafening and blinding foes temporarily are also possible with this dance. In direct comparison, the magic splitting dance, which “only” nets you access to the Disruptive, Spellbreaker and Teleport Tactician-feats, feels rather uninspired. Additional speed and forced movement also feature among the war dancer’s options via dances.

Beyond dances, 2nd level war dancers may as an immediate action use true strike 1/day +1/day for every 4 levels. At 3rd level, the war dancer gets an ability that is rather interesting – to offset the rather bad AC of the class, as an immediate action, war dancers may react to ranged and melee attack by making a sense motive check and substitute the result for his/her AC or touch AC, upping the chances of evading that particular strike. It should be noted, that the ability does not work (thankfully) versus combat maneuvers.

War Dancers also learn to cast a limited array of spells via wis starting at 4th level – at caster level -3 analogue to the paladin and ranger as a spontaneous caster and uncanny dodge/improved uncanny dodge also feature in the class abilities. As a capstone, war dancers can start with both basic and advanced steps at once.

After a short paragraph on war dancers in your world, we get 5 new feats for +6 rounds of dancing, advancing to an advanced/expert step as a free action (but not allowing you to enter multiple dances), gain an extra dance, an extra guided strike or an extra specialization. We also get two new spells, one allowing you to grant an ally the benefit of your dance or grant an ally +20 to one attack – as a standard action.

We also get two new archetypes for the War Dancer: The Arcane War Dancer who gains light and medium armor proficiency, dance via Int instead of wis and instead of the sense-motive based evasion, the class gets an arcane pool and replaces spells with a magus’ arcana – interesting choice, albeit perhaps a bit oddly named – no spells for arcane war dancers might seem a bit counterintuitive, but this complain should be considered cosmetically only.

The second archetype would be the Southern War Dancer, who gets an expanded skill-list and 6+Int skills instead, can dance in light armor (and gain proficiency in it) and use cha instead of wis to calculate his/her abilities and spellcasting. Furthermore, these dancers get limited access to some bardic performances (again, instead of the sense motive-attack evasion)and at first level, they get a special dance that bolsters allies: While the AC-bonus and morale bonus to saves as advanced step/expert steps respectively are neat, the basic step imho is a tad bit too strong, granting all allies within 30 ft. fast healing 1, increasing the amount healed at higher levels. While not massively overpowered and evening out fast in higher levels, I’m not particularly comfortable with area-effect fast healing at 1st level. Personally, I’d add the caveat that a maximum of class level individuals can be affected at once by this basic step.

Editing and formatting per se are top-notch; I didn’t notice any significant glitches. Layout adheres to an easy to read 2-column standard with nice full color artworks. The pdf comes with a printer-friendly version and no bookmarks, but extensive hyperlinks to d20pfrsd.com. However, hyperlinking is not consistent, with e.g. the Disruptive-feat not being hyperlinked or the spell-list lacking some hyperlinks/having some faulty ones – e.g. bull’s strength links to the str-score. Hyperlinks should be done right and consistently, so minus points for that.

The War Dancer is an interesting class – taking the concept of a melee fighter sans armors without wildering (too much) in the monk’s territory into a creative and well-executed direction with various bold and neat design-decisions  that actually make the armorless melee fighter work well and feel distinct – though he can nova better than any base-class focused on melee so far – something DMs should consider. However, there are some rough edges – from the lack of bookmarks to the at times faulty hyperlinks, the War Dancer feels a tiny bit less polished than it could have been. Also, in contrast to e.g. the Vauntguard, we get no sample NPCs, though I won’t hold that against the pdf. DMs allowing war dancers should take heed regarding skill-boosting magic items, though and comparatively, the class is definitely on the upper end of the power-scale – DMs may wish to tightly control which magic items find their way into the war dancer’s hands.

Still, in the end, the pdf is slightly less polished than I would have liked and hence, I’ll settle on a final verdict of 4.5 stars, rounded down to 4 for the purpose of this platform and missing the 5 only by a slim margin since its balancing, at least too me, is a bit off with all the options to hit with relative precision and evade attacks with buffed up sense motive.

You can get this interesting take on the unarmored fighter here on OBS and here on d20pfsrd.com’s shop.