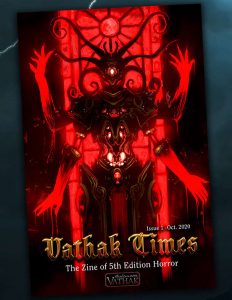 Okay, we begin this installment with a cool NPC, a cambion militia captain Zacharia Lammant, who is an interesting ally whose twisted exterior does not mirror his personality; my only regret with this entry would be the lack of stats. Regarding further flavor-centric write-ups, the ‘zine includes a nice two-page write-up a tavern, the “Hangman’s Daughter”, including notes on menu prices, etc.; I love the artwork provided for it, but would have preferred a map instead, but that may be me. There also would be a 2d20 table of strange settlements in the Ina’oth region, which I per se appreciated, but I did not get why it was a 2d20-table. It’s exactly 20 entries long. Weird. There is also a crimereport page that any decent GM can use as adventure-inspiration.

Item-wise, the ‘zine includes the apothecary kit, and 3 magical cloaks: The first is a winner: Once per rest interval, change into a flock of birds as a reaction to being hit; winner. There is essentially a one-use “extra-life”-cloak made of burial masks that gets full points for its creepy imagery evoked, and the third one is actually a cursed cloak that can make you an unwitting slasher. These cloaks are cool.

The ’zine also includes an article on forbidden lore and corruption, which differentiates between 4 types of reading that take different amounts of time, with failed saves resulting in corruption that translates as a bonus to ability checks pertaining to Great Old Ones, and eventual power gains, but also the threat of losing it; the engine per se is solid, and while I’d have streamlined a few minor passages in the verbiages, it’s a system that’s easy to expand and customize further.

On the player-facing side of things, we have a race with the living dolls, who get a Constitution increase of 2 and don’t need to eat or drink (but RAW do need to breathe!) and are Small with a speed of 25 ft.; they come with 3 subraces (porcelain, rag doll and marionette), each of which features also an ability score increase by 2 (Charisma, Dexterity, and Intelligence respectively), and each subrace comes with its own unique feature. I really enjoy this write-up for what it is on 2 pages, but personally would have leaned deeper into the doll-nature, working with more positive features and some drawbacks, but that’s just my preference, particularly for horror games.

On the class option-side, we have a warlock pact with the Undead Lord; the expanded spell list lacks proper spell formatting here; first level either nets darkvision or increases it to superior darkvision, and also removes the requirement to eat, drink or breathe, and also nets advantage on saving throws versus exhaustion, paralyzed or poisoned, which seems a bit front loaded to me. 6th level lets you shapechange (incorrectly formatted in text) into a Tiny bat or Medium wolf once per short rest interval, 10th level nets advantage on saves vs. being charmed and frightened, and 14th level nets resistance to cold, necrotic, poison and psychic damage, but also vulnerability to radiant damage. Decent, I guess, but, at least to me, not interesting.

There are two brief modules in the ‘zine. One would be “The Rimeguard Trials”, for a party of level 8 adventurers (no number is provided), which is supposed to last for 1-3 hours, which is a solid assessment in my experience. It has no read-aloud text, and no map. The mini module deals with a test of strength and a kind of test that would allow a party member to “gain” lycanthropy as a reward of sorts. This module would be forgettable in many regular fantasy settings but is a total failure for Vathak. It is not even remotely creepy, is bereft of any cohesive atmosphere, has serious amounts of treasure for paltry challenges, and potentially introduces the issue of player character lycanthropy. Not recommended.

The second module fares better: A one-session dungeon with “The Firefly Cult” that centers on the exploration of a former cult’s sealed basement, and the threats therein; no suggestion regarding party size or character level is provided, but the customary 4–6 characters should work; level-wise, I’d recommend level 2–4, though only parties that don’t mind character death or TPKs should attempt this at level 2. Indeed, there is a new critter herein that can wipe out a level 2 or 3 party if things go badly, but really skilled and clever parties can beat this at level 1…or avoid it. Only the best parties will succeed at this feat, though. The module has neat read-aloud text, and a solid b/w-map, though no player-friendly version is included. The module does include a challenge 5 critter, its statblock being a neat representation of the classic mythos critter. The atmosphere of the dungeon is rather neat, but it’d have been neat to have a more focused information on the cult and how they operated; a table for legwork-based information on the cult could have helped here. You know, set up how something happened, then deliver the payoff in the dungeon. A higher degree of interactivity with the per se solid dungeon. Finally, the entry door needs a pretty high DC to even enter the dungeon; while it makes sense here, it can be slightly frustrating. That being said, for a ‘zine-based ultra-short module, this does its job.

We get a couple of solid adventure hooks themed around the war-effort against the forces of the Old Ones, and a fully-statted NPC also features a neat hook; said NPC would clock in at challenge 2, and represent an interesting gangleader with a tragic backstory of poverty, crime…and eventually, notorious; there is a reason the fellow is called “Lobster” as a nickname. Solid writeup, though, for me personally, the fellow is slightly too goofy for my interpretation of Vathak, but YMMV. While we’re on the subject of statted beings, the module also features a delightfully icky undead, but curiously, ability name formatting, something the other statblocks herein got right, is incorrect; other than that, though, the massive amalgamation of evildoers (well-illustrated in b/w, like a lot of creatures/NPCs/environments herein…) is a brutal challenge…and some of the classic ways to survive such monsters won’t cut it here, and it does have some tricks that make it more manageable, so yeah…interesting!

Editing and formatting are both inconsistent on a formal and rules-language level; sometimes, we have excellent precision, and sometimes…not so much. Layout adheres to an easy-to-read two-column standard for the most part, though 1-column sequences can be found. Artwork deserves special mention: The original b/w-pieces throughout are numerous and stunning. They rock. Aesthetically, this one gets two thumbs up. Cartography, in stark contrast, is basic, and the lack of a player-friendly version of the map hurts it in the convenience department. I own both the pdf and the perfect-bound print on demand softcover, and I recommend getting the softcover. Why? The pdf lacks bookmarks, making navigation a colossal pain.

Some of these articles are inspired, ooze atmosphere and rock; others…not so much. One adventure is not good, while the other feels like it could have been awesome and more effective with a bit more lore, and only remains a solid sidetrek. The other articles range from hitting Vathak’s flavor in a pitch-perfect way to less impressive fantasy pieces, though the majority does hit the right notes in the themes. Mechanically, the ‘zine is extremely conservative and could have used a bit more experimentation in my book, but as a whole? As a whole, this is a successful and promising Vathak Times; if you enjoy dark fantasy or horror gaming, there is quite a good chance you’ll get some inspiration out of this supplement, and the bang-for-buck ratio is fair as well.

This sports several authors: Ismael Alvarez, Rick Hershey, Lucus Palosaari, Troy Daniels and Geoff Gander wrote this, and it shows in how uneven the ‘zine is. It does have its moments where it shins and executes, and as a whole, I do think that it deserves rounding up from my final verdict of 3.5 stars…for print. The verdict for the pdf should be rounded down for the comfort detriment.

If you considered this review to be useful, please contemplate leaving a donation or joining my patreon. Thank you.