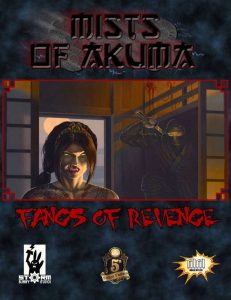 This adventure for the Mists of Akuma-setting clocks in at 39 pages, 1 page front cover, 1 page editorial/ToC, 1 page SRD, 2 pages of advertisement, 1 page back cover, leaving us with 33 pages of content, so let’s take a look!

Now it should also be noted that two pages of the pdf are devoted to providing a recap of the mechanics for both dignity and haitoku, the attributes introduced by Mists of Akuma. The module is intended for 6th – 7th level PCs and should be used with a well-rounded group. While this is intended to be run in the bleak, mist-shrouded lands of Soburin, the module works in other settings as well, provided you can tweak it to include Soburin’s peculiarities – i.e. Japanese Horror with a subdued steampunk angle.

The adventure contains a rather extensive stat-section, providing full stats for the adeddo-oni and the hebikontorōra from the Mists of Akuma book, but also stats for potent factory workers, a hengeyokai ninja and two true hebi hengeyokai – as well as the template to create more of these fellows. As an aside, the picture on the page depicting the template, while a bit cheese-cake-y, is up my alley, in that it looks very Conan-like; scantily-clad woman + threatening serpents = win (sorry, I just like my Sword & Sorcery…)…but I don’t think it fits Mists of Akuma that well. That just as an aside, though!

All right, only GMs around? Great! The city of Samon is an important industrial center, and when the PCs are summoned by the benegoshi, they’d better heed its call – to do otherwise would equal a death sentence. But things are less simple than what the PCs may expect to find – as much can be gleaned from the NPC-section provided for the GM: We get 3 pages of bullet point motivations, goals, etc. (as well as pointers towards which stats to use, if in question), allowing for an easy way to get an overview of the plot. Similarly, a nice, isometric map of the city (looks like a modified public domain source and is thus surprisingly atmospheric!) and a brief overview of the city help contextualize the proceedings for the game – for Samon’s architecture is very much defined by foreign influences, allowing you to dive into the (fear of) progress/xenophobia angle and the railroads that the city sports make for a great way to have players into Japanese history (or, well, history as a whole), capitalize on the fear and superstitions surrounding that invention.

Anyways, the PCs are summoned to a rather disgruntled lord, powerful only in station and overshadowed by the importance of both the Taizuki Rail Company and the fudōsoge training facility nearby…and, as the posters the PCs probably saw highlight, a worker’s rebellion certainly won’t help his status…To add to the heap of issues, animal trickery is on the rise, so hengeyokai, kami, etc. may also be at work. He also mentions nine arrows, perverts…and falls promptly asleep, being addicted to black smoke, leaving the PCs with a rather daunting task ahead. (It should btw. be noted that the pdf sports a nice handout of the summons!)

Ultimately, the PCs must investigate the proceedings in the unique city – which sports a rather cosmopolitan populace due to the demands of the heavy industry. There is an easy point-based mechanic for the Gm to track the potentially favor with the Fangs, as they go into deep cover – and here, we get the cool and diverse investigation that matters that I wanted to see in the yai sovereign.

Remarkable, btw.: We get a semi-isometric sideview of the rail company’s base, with the outer walls partially cut open; a really nice picture that does an excellent job at highlighting why I actually comment in a positive manner on how Mists of Akuma books employ the public domain assets in really cool ways. The module here, both regarding investigation and strategy for infiltration, are btw. really varied: there is more than one way to get into the good graces of the Fangs and infiltrate them…though PCs may well end up having to cause some havoc. Similarly, tailing suspects is covered and the pdf does cover several individuals…which may well act as foils as well as targets when the PCs start asking questions.

In the end, the PCs will be led to Chujiang gardens in the middle of the night – which btw. come fully mapped and here, the PCs will probably have a fight on their hand – one in a rather cool environment. EDIT: Here, I botched. I wasn’t aware of one of the gender-neutral pronouns, since my professional environment uses a different solution. Mea culpa if anyone was offended!! On the plus-side, if the PCs botched their investigations, the aftermath of combat is a perfect way to fill in as many blank spaces as you’d require.

Let’s recap here: The PCs may quite well be fugitives at this point, considering their deep cover; the lord’s addiction makes him useless regarding support, unrest stirs and the mysterious 9th Arrow seems to have an alliance with Harold Itrikasu…oh, and guess what, rebellion is bound to strike! The PCs need to hurry to Tazuki Rail Company, as the streets are suddenly less than safe, courtesy of the uprising…and at this point, the true stakes should be somewhat clear: Unbeknown to most, there once was a serpent hengeyokai race (hebi), particularly vile and nasty; these had been mostly purged in the Kengen occupation, courtesy to a being from the Utamara bloodline absconding with a scroll containing names and guises. Well, guess who’s back and looking for revenge? Oh, one interesting component: Hebi can become stronger – requiring just a horrible sacrificial ritual, one that may well see the last descendants of the Utamara bloodline slaughtered.

The finale has the PCs enter the Tazuki Rail Company’s basement for a truly complex and interesting finale, with a ton of terrain features noted…and while the disruption of the sacrifice ends the module per se, it leaves Samon in shambles…and the PCs in a unique position: They may well be the only individuals who *get* what happened…and they may well have the tools to negotiate the future of the city and unearth more – the module is a perfect set-up for a sequel and modules to come, while remaining sufficiently self-contained.

Editing and formatting are, as a whole, pretty good. Layout adheres to the slightly cluttered 2-column full-color standard of the Mists of Akuma supplements, which cram a surprising amount of content on a given page. The artworks sport a blend of historic, public-domain works and the aesthetics of the series, making the visual style relatively consistent. Original artworks, as for example for the NPC-role-call, are somewhat more comic-like and not that great. On the other hand, there are some amazing pieces herein as well. The module comes fully bookmarked for your convenience. I would have enjoyed another battle-map style version of the map for the final battle, but the other maps are neat, particularly considering the fair price point.

Fangs of Revenge is superior to “The Yai Sovereign of Storms” in pretty much every way; it’s smarter, more complex and makes truly excellent use of the unique Mists of Akuma setting. The investigation and plots are grand and require a somewhat experienced GM to portray, but it is fascinating how much cool content is crammed within these pages. The book reminded me, in some way, of the Shin Megami tensei Devil Summoner games, of Vidocq through the lens of Mists of Akuma; this module highlights social tensions, racial struggles, complex intrigues and a snapshot in history, where things change, generating a sense of an evolving world where the PCs may be catalysts or motors of change. In short, this is a really nice module that is modular, interesting and sports serious potential for further expansion – it’s a module that can sell experienced players on the setting. All in all, very much worth checking out, my final verdict for this one will be 4.5 stars, with the map for the finale and the none-too-strong editing being the downsides of what may otherwise be one of the best modules Mike Myler has penned so far. Considering how enjoyable I found this module, I will round up for the purpose of this platform.

You can get this high-concept, high.stakes investigation here on OBS!