Mists of Akuma: Cursed Soul of the Scorpion Samurai (5e)

Mists of Akuma: Cursed Soul of the Scorpion Samurai (5e) 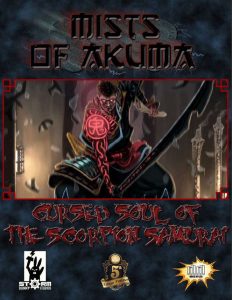 This adventure for the Mists of Akuma-setting clocks in at 44 pages, 1 page front cover, 1 page editorial/ToC, 1 page SRD, 2 pages of advertisement, 1 page back cover, leaving us with 38 pages of content, so let’s take a look!

Now, it should be noted that the module does not per se require the Mists of Akuma setting book, though it most assuredly is recommended; the adeddo-oni stats used are reproduced here, alongside new material, like the stats for the penanggalen (challenge 6), the challenge 4 scorpion ninja and, of course, the eponymous scorpion samurai. The legendary odachi scorpion’s tail is also included and is both really potent and really evil…it should not be too hard to make PCs not want to use the blade, in spite of its definite allure.

We begin this adventure in Yukinokyū, in the Kizuato prefecture, forced to the area by the uncommon spring weather. It is here that the PCs receive a secret missive from the benegoshi of Fuson on behalf of the emperor. (The missive is btw. represented as a nice, potential handout – though you have to cut it out of the page – having it on a single page would have been neat.) Anyhow, the missive is pretty peculiar, in that it requires that the PCs travel to the town of Kakasu, with the request and presence of the PCs needing to remain unknown. Thus, the PCs are supposed to take Hidaretei pass, which is a known hunting ground of ogres. Really cool: We get several nasty hazards for crossing the pass, from microstorms to stinking crevasses, this adds a bit of detail, and we do get a couple of random encounter suggestions. And yes, there will ultimately be a showdown on a nice little battlemap. (It has no scale, but I assume default 5-foot-squares.)

But wait! What if your players are smart and prefer forging travel papers to reach their goal? That option has similarly been covered in a sidebox – kudos! When arriving at Kaksu, the timing couldn’t have been worse, as the mists of akuma are approaching. The hustle to the settlement (which comes with a solid map) can once more include some nasty battles, and, as they arrive in town, the PCs need t be careful: They have to find Fūmiyutakana without alerting anyone – they’re sworn to secrecy, after all! (And yes, failure has consequences here!) Sooner or later, the PCs will find themselves at a restaurant, facing a test of their cultural knowledge – not showing the proper knowledge of etiquette may cast an unfortunate light on them – but ultimately, they will get a map concealed under dumplings, one leading into the forest.

Following the trail into danger once more, the PCs meet Yukari, who tells them about the deaths of various former servants of the Fuson family – and how they all had in common that they were part of the banishment of Hinjuku Nagaro, the titular scorpion samurai. The remainder of folks on the scorpion samurai’s death list, are currently enjoying the hospitality of lord Gabiru Fuson in Shinjitsu on Shōjiki Island. Secrecy is tantamount, for the trap is pretty obvious and the scorpion samurai has many allies – which is why outsiders, an unknown party, is required – secrecy must be maintained as the PCs are tasked to eliminate the disgruntled samurai – preferably before he completes his revenge-driven blood ritual.

Alas, as the PCs either travel on or try to return to civilization for the night, they’ll have to first face down deadly threats (once more with a solid encounter-map) – fun here: Terrain does matter and the bamboo squares can make for nice tactical tricks. Getting to the island has obviously more than one solution, and, indeed, more than one is mentioned. The mists do not let up – briefly after the PCs have landed on the island, the mists roll in – and with them, danger galore, as the populace barricades their doors and windows, leaving the PCs to fight in the tiny (mapped!) hamlet. Oh, and the PCs still have to maintain their secrecy…

Worse, once the PCs, hopefully disguised, ask around, they’ll soon realize that the scorpion samurai is pretty much a local hero here, which complicates matters further. Yukari has set up 3 targets as bait, three chances to catch the scorpion samurai…however, depending on how the PCs fared, one or more may already be dead…so let’s hope they didn’t blow their cover! Ultimately, the PCs should definitely manage to prevent the final sacrifice, for its none other than Chijmatsu, lord Gabiru’s daughter, that will cement the power of the scorpion samurai once and for all – in order to stop her sacrifice, the PCs will have to venture to Ikatteiru cave and stop the dread ritual before the woman’s soul is ripped from her body. While the cave is mapped, in an odd choice, the actual cave floor lacks a grid otherwise present on the map. There are further complications: A penanggalen hell-bent on revenge; a draconic ally…and the significant power of the deadly scorpion samurai. Suffice to say, the finale is challenging indeed…and it has some serious potential for further adventures.

Editing and formatting are better than in the first two Mists of Akuma modules and the stats are solid – not much to complain here. Layout adheres to the somewhat cramped 2-column full-color standard of the series, but manages to fit a lot of material on a given page. We get a blending of original and public domain artwork and the cartography is in full color and solid, though the final map’s glitch is a bit annoying. Plus-side: The background story of the scorpion samurai is presented, hand-out style, on two pages – nice. The pdf comes fully bookmarked for your convenience.

Mike Myler’s yarn here is a great example on how to make a high-octane railroad that doesn’t feel like one. The module is, structure-wise, pretty linear, but still provides means for the PCs to jump off the rails. The espionage angle adds further complications to the PC’s task and can be played up for some rather remarkable scenes, all while enhancing the themes of mistrust and paranoia that work so well in Mists of Akuma. In short, this is a great example on how to do a good, rewarding linear scenario that doesn’t feel constrained. Frantic, busy and intentionally opaque in some regards, the scenario, as a whole, is certainly well worth playing, particularly for the low asking price.

It is also a scenario that works rather well on its own: Unlike the (imho superior) “Fangs of Revenge”, this one is less steeped in the peculiarities of the setting. We don’t have a revolution, a vast cadre of NPCs, etc. – while this makes this module less unique, it also renders it easier to run than the somewhat challenging yarn of Fangs. They are two different breeds of module, but ultimately, both are steeped in the themes and atmosphere of the setting – and both are better off for it. In short: This is a well-made module for a fair price-point. It is easier to plug and play it than Fangs, but also doesn’t carry the same level of oomph and impact. In the end, my final verdict will clock in at 4.5 stars, rounded up for the purpose of this platform.

You can get this high-tension covert-ops scenario here on OBS!