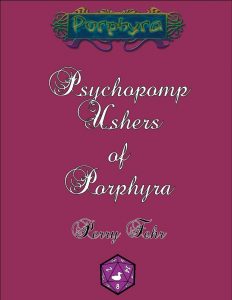 This pdf depicting the deity-level psychopomps found on the patchwork planet of Porphyra clocks in at 17 pages, 1 page front cover, 1 page editorial, 1 page SRD, leaving us with 14 pages, so let’s take a look!

But what are these psychopomp ushers exactly? Well, the closest analogue would be empyrian lords, dukes of hell, arch-demons…you know, quasi-divine, extremely powerful outsiders. The concept is so simple and makes sense – subordinates to the Queen of Death, these beings allow for a nice array of customization regarding different types of takes of the concept of the shepherd/usher of souls and agents of death.

The interaction of these powerful entities with both the elemental lords of the setting and the numerous deities of the setting is covered in vivid prose, before we are introduced to 6 new faith traits – properly classified in trait type, which is nice. They all come with a brief sentence, encapsulating their flair and then go on to provide relevant bonuses – like +1 dodge to AC in a mausoleum, graveyard, etc. or an increased benefit from using a hero point. I generally like these traits and they, as a whole, represent some nice tricks. At the same time, the rules-language employed isn’t always as precise as it should be – the rules-language may be functional, but something inside me cringes when I read: “…and gain +1 Knowledge (geography).”, particularly when just adding in the proper bonus and streamlining it would be so easy.

A total of 8 psychopomp ushers are included, all of which note their target worshipers, favored weapon, 4 domains and 4 subdomains and favored animals. The first of these would be Anguta, Father, He Who Eats No Kin – the respective psychopomp ushers sport detailed and interesting legends, with Anguta offering insight into the myths of the ith’n ya’roo. Each of the respective psychopomp lords also comes with two exclusive traits that are classified as religion traits. Much like the previous traits, they are functional, but diverge in the way they’re phrased from the standards.

To a point where it honestly annoys me and is something that really grates on my nerves.

One trait available for Anubis’ followers, for example, reads: “You may cast restore corpse as a spell-like power once per day.” We all know what’s meant, but frankly, even pathfinder novices can spot which part of the rules-language is plain WRONG. And honestly, at this point, I’m somewhat out of patience; Perry Fehr’s crunch is always like that: Inspired when he gets it right, but such hiccups litter it when he doesn’t take the proper time, sometimes to the point where it’s rendered broken. This is not the case here, but still – it’s frustrating because it’s so easily fixed.

Black Crow, omen giver and god of tengus is pretty cool…and a trait quotes “Last Resort” by Papa Roach, putting a bullet into the barrel of an empty gun with a 50% chance…which is pretty cool, though the combo of the song-reference and the content conjured up a very unfortunate memory for me…but that’s not the pdf’s fault. Particularly when here, I can’t really compalin about any mechanics. Ereshkigal is similarly amazing – this entity is basically the incarnation of the last Material Plane that suffered the entropy death. Similarly cool – the Pattern Discepancy Phenomenon, aka Ghost in the Machine – the usher for constructs and golems, is concept-wise amazing and one for everyone who likes to insert a tinge of transhumanist philosophizing to the game.

The Guedia would then not eb a single entity, but is instead a conglomerate of various deities, with the more classic Hermes and Hekate completing the roster. The brujo class receives two new cabals and the pdf also introduces the neutrality domain, which lets you designate a target as neutral via the help of a sanctuary-ish effect and at later levels convey the neutrality special weapon quality (+2, included herein), which deals only +1d6 bonus damage versus good or evil targets, but may switch between good and evil for purpose of overcoming DRs – and yep, I think the increased flexibility and decreased damage output make this worthwhile. The subdomains lets you Wis-mod times per day touch a being – on a failure, they gain a bonus thereafter, on a success a penalty, making this an interesting, tactical ability…that conveys the make-belief “divine” bonus that does not exist. It’s either sacred or profane. Indifference lets you emit an aura a limited number of rounds per day, which penalizes saves, makes the terrain difficult and prevents flanking and aid another. The ability does not sport an activation action and auras, more often than not, can be activated quicker than the standard default.

The pdf also features a 5-level PrC, the transdimensional eliminator, aka Ghost-Sunderer. And jup, it’s basically a thinly-veiled Ghostbuster-PrC. It nets a d8 HD, 3/4 BAB-progression and good Fort- and Will-saves. oddly, it requires spellcasting to qualify, but sports no means of upgrading that – no spellcasting progression. Also problematic: The PrC requires Exotic Weapon proficiency (heavy weaponry)…which does not RAW exist. Now, I get what this tries to do…but it just doesn’t work that way. The first level nets the signature neutron gun, which similarly ALMOST works. It, pretty verbosely, manages to codify the neutron pack as a weapon in the ability-write-up…something that would have been more easier to work with if presented as a proper weapon. The pack causes untyped damage, which made me cringe a bit and may misfire on a 1.The wording is mostly functional, but deviated significantly from the standard: “…and had no damage reduction statistic.” would be just one of several examples herein. The class also gets +2 to Perception and 2nd level nets 60 ft. blindsight for the purpose of noticing undead/spirits and distinguishing the living dead from the living.

An issue here is that the non-standard wording makes this look like regular blindsight and more opaque than it should be. 3rd level adds + class level to DCs to intimidate the character. 5th level nets SP see invisibility, usable 10 minutes per day, in 1-minute increments. 4th level provides +2 AC. Now here is the BIG issue: Know how you use the neutron pack? By expending level 1spell slots. RAW, this severely limits the blasts you can fire. It’s not clear whether this activation only covers one attack, all attacks for one round, etc. Granted, 3rd and 5th level net one free use, respectively, but the lack of spellcasting progression makes the PrC a flavorful, but flawed idea that can only use its one defining feature rarely. Worse, all abilities beyond gaining the gun are not worthwhile, making any levels progressed herein beyond 1st pretty ineffective. Oh, and 4th level makes you immune versus the special attacks of “ectoplasmic” creatures – whatever THAT is supposed to be.

The pdf concludes with the CR 5 loa psychopomp.

Editing and formatting are very good on a formal level; on a rules-language level, I really wished someone had properly rephrased the majority of crunch. The accumulation of non-standadized wordings is frustrating, to say the least. The pdf sports great symbols in full color for the ushers and has a nice artwork for the loa as well. Layout adheres to a 2-column full-color standard that is pretty printer-friendly.

Blergh. At this point, I’d love to shake Perry Fehr and ask him why he does that to me. You see, I love a lot about this pdf; the ushers are amazing regarding their fluff and the traits are, theme-wise, creative and fun. I just wished this had received either the due care or proper rules-language editing/development. The ghost buster PrC is pretty cool and gets it *ALMOST* right…which makes this so frustrating for me as a reviewer. If you care primarily about the fluff and don’t mind making copious GM-calls, then this can be considered to be as good as 3.5 to 4 stars, while those who want precision in their rules can consider this as bad as 2 to, at best 2.5 stars. In the end, the frustration is what makes me consider this flawed – you see, this pretty much could have been very good, amazing even. As presented, it is at best a mixed bag – which is how I’ll rate this: 2.5 stars, rounded up for the purpose of this platform, mainly because it does not deserve the 2-star-slap.

You can get this pdf here on OBS! (Its fluff is great!)