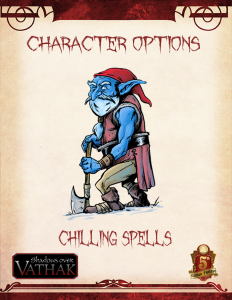 This supplement clocks in at 2 pages, 1 page content and 1 page editorial/SRD, so let’s take a look!

This review was requested as part of a series by my supporters, who asked me to cover the entire product line.

This pdf includes 3 different spells, the first being chilling breath, has a non-standard range: The cantrip lists it as a “30 feet cone”, but 5e formats this usually Self (30-foot cone). The spell is broken in some ways: It is a cone, but only targets a single creature or object? How? Its verbiage is also broken. “Make a Dexterity save. If successful then avoid damage altogether. If not, then take 1d8 cold damage and be slowed by 5ft per round for 1 round.“

…RAW, this spell damages the caster. Also: Slowed is not a condition in D&D 5e. This spell does not work as written.

The second spell is wall of cold, a 4th-level spell, which can be cast as a wall maintained by concentration, or as a wave. Unfortunately, the offensive wave is broken in various ways: 1) it doesn’t properly codify its area of effect. I read and read it, and it doesn’t make sense. Secondly, the spell fails to codify its damage type properly. Thirdly, the spell causes 3 (!!) levels of exhaustion on a failed save, which is ridiculous overkill in 5e, even if this exhaustion is removed by a short rest. Certainly not suitable for a 4th-level spell.

The final spell is another 4th-level spell (hyphens missing in the spell headers, btw.), and entraps the target in ice. This spell is broken and not operational. The rules syntax in the first paragraph is borked, but at least kinda functional. The spell makes no internal sense: It has 150 hp, and the imprisoned target takes 25% damage, which is annoying to calculate. The prison is only affected by bludgeoning damage, which makes no sense. (Thunder? Lightning? Fire?) After the spell’s duration, it takes 4 hours for the ice to thaw, which may be hastened by applying fire? Ridiculous: “Magical fire applied to the icy prison will reduce the thawing time by 75%.” Per application? Why isn’t this done via hp? This is extremely clunky, to the point where it’s VERY hard to run at the table. In the aftermath, the victim also…bingo, takes 3 levels of exhaustion.

Editing and formatting are bad on a formal and rules-language level. Layout adheres to a 2-column full-color standard. The pdf has no bookmarks, but needs none at this length.

Troy Daniels obviously had problems with the rules-language of 5e and its balancing, and no developer has fixed this either; not one of the three spells is functional or balanced properly, alas. The ideas are neat, but the execution is broken. I can’t recommend this. 1 star.

You can get this pdf here for a single buck.

I’d rather recommend you support Vathak by getting one of the other Vathak pdfs, though. You can find them here.

If you consider my reviews to be helpful, please consider leaving a tip here, or joining my patreon.