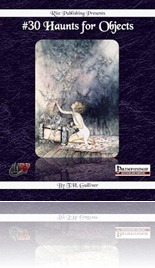 Following the format of the haunts-books, we are introduced to the thematically-linked haunts by a well-written introduction of Pers Veilborn. After the well-written prose, we are introduced to different types of haunts: The basic concept is expanded upon by introducing a type of haunt which may be triggered by gazing upon it. Advice on chaining haunts together as associated haunts is also provided.

Dolls or similar items which are possessed have been a staple of fantasy and horror literature and movies for quite some time and the addition of haunts to the objects is something that had to be done sooner or later – I’m just glad T.H. Gulliver did it. The haunts we get span the CRs from 1 to 11 and contain mirrors seeking to trap souls, bloodthirsty beds, wardrobes haunted by a conjurer’s wife’s deceased lover – you name the creepy stuff, it’s there!

If you thought cursed items were bad news, wait till you get a taste of haunted ones! Alternatively, the content of this pdf makes for an excellent addition to mansions, haunted castles or really any location inhabited by civilized humanoids you can conceive, adding further twists to your designs. Even better, the little stories of how the haunts came to existence make for neat little adventure hooks and often inspire narratives of their own. Take the unfaithful conjurer’s wife, whose lover was slain by the wizard in her wardrobe via vermin. What if said man’s family is haunted by dreams of crawling death, slowly subverting their collective will to live? (Perhaps via another haunt?) To save them, the haunted wardrobe has to be found and purified, but the unfaithfulness of the conjurer’s wife and his rage-driven murder first have to confirmed. Worse, what if the two are actually the best defence the town has against marauding threats? Depriving the town of the two by meting out justice might spell doom for the settlement…

My personal favourite’s though, are the extremely deadly 3 haunts that make up the “Worm God’s Temple”, a dark and desolate place devoted to a primal and rather cruel spirit and essentially provide a rough frame for a great adventure in combination with the introductory narrative. Even better, the CR 10 Worm God makes for a ready-made villain and mastermind for said encounter/adventure.

Editing and formatting are good – I noticed some asterisks where none should be and a superfluous break along some very minor punctuation errors. Layout adheres to the full-color-2-column standard we know from the free Pathways e-zine and the art, albeit stock, has been expertly compiled to render a coherent and fitting ambience to the pdf. T.H. Gulliver has proven time and again a mastery of haunts and traps and this latest installment is no different, providing excellent content at a very affordable price. However, I do feel that the items, while cool could use further expansion and maintain that 101 of them would have been better than 30, especially due to the quality of the associated haunts. In “#30 Haunts of Ships & Shore”, the hauntings could be easily strung together into a whole adventure by providing a frame-work and more associated options. I would have loved to see something similar to expand upon the worm god’s dread influence. However, I can scarcely hold the quality of the predecessor against this book – it still is an excellent offering that only falls short of my seal of approval due to the minor glitches and said lacking framework. With them, this would be straight 5 + Endzeitgeist-seal of approval. My final verdict will be 4.5 stars and a hearty recommendation, rounded up to 5 plus seal of approval for the purpose of this platform. The only question that remains to me is, when we’ll see a full-blown horror-adventure or “Super-ECS” by T.H. Gulliver – the talent seems to be there…

30 Haunts for Objects is available from: