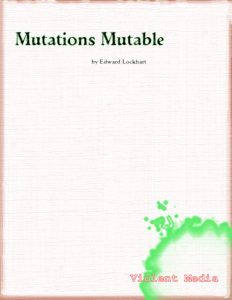 This little pdf clocks in at 10 pages, 1 page front cover, 1 page SRD, 1 page back cover, leaving us with 7 pages of content, so let’s take a look!

The idea is pretty simple: You have 5 pages, each of which sports 6 mutations. You take 12 or 20 of them, put them on a chart and roll – the pdf suggests 1d12 or 1d20 for that. Mutations may replace previous versions of the mutation, stack with it, reverse it, etc. Yep, this does mean that the respective mutations have several degrees of severity, which you determine by rolling 1d6, with the higher results yielding the more potent abilities.

The pdf has an interesting 1st-level spell which mutates the target…but if it saves, the caster must save as well to avoid being mutated! I really like this, as it emphasizes the danger inherent in magic and makes magic…well, feel more like magic.

So, what do the respective mutations cover Well, let’s take a look at scaled skin: That one can yield either psoriasis, ichtyosis vulgaris or actually armor-bonus-granting scales. You could also turn into an anthropomorphic dragonfly (which RAW, weirdly, does not have the mandibles of the middle mutation)…and there would be boils that can actually scald those popping them…but is the damage applies to an attacker? The one with the boils? The mutations are per se imaginative, but their rules-language simply could be more precise.

Spinnerets, scorpion stingers, snake tongues, which nets “+1/6 for searching where smell is relevant” – that should probably be 1d6 or +1 in 6 chance or something like that, when referencing how that is usually phrased in LotFP and some other OSR systems… What kind of plague do plague buboes inflict? On the plus side, diverse metals as skin is interesting. A mutation that splits the character in multiples refers erroneously to wizard instead of mutatee. Players retain control over the characters…but that makes me wonder if the split copies have a kind of self-sustaining drive. The process may be reversed by consuming the copies, you see…A wizard pearl growing in the throat is cool idea-wise…but does that impede breathing/swallowing/talking? You get the idea: The mutations are interesting, but could be slightly more precise in their respective effects.

The pdf also contains 3 magic items, the first of which would be the returning vial, which raises all nearby its possessor when the creature is slain…but those raised receive several mutations. Secondly, there would be the pipes of abandon that cause those that hear its tunes to be forced to dance, granting powerful benefits…but at the cost of being aged and the player risks mutation. Thirdly, there would be a wand that casts spells as though they were 1d6 levels higher…ouch. Depending on the precise system used, this can be pretty potent…but, once again – excessive use will mutate you.

Editing and formatting on a formal level are pretty good. On a rules-language level, these aspects could be slightly more precise. Layout adheres to a 1-column/2-column b/w-standard and the pdf has no unique artworks. The pdf has no bookmarks, but doesn’t necessarily require them at this length.

Edward Lockhart’s little mutation engine does not stand up to the more massive ones I have for diverse systems, from OSR to PFRPG etc. This does have a raison d’être, though – this is PWYW, after all, and as such, is actually worth taking a look at if you need a quick mutation array. My final verdict will hence clock in at 2.5 stars, rounded up for the purpose of this platform.

You can get this small mutation-array here for PWYW on OBS!
Endzeitgeist out.