The Sinking: Ascension of the Prophet 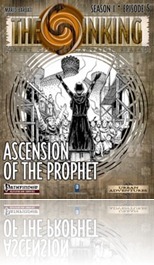 This being an adventure review, I encourage potential players to skip ahead to the conclusion in order to avoid the SPOILERS that now will come.

Righty right, so a rather shocking event like “The Sinking” striking the metropolis had to have some kind of religious consequences and this particular installment deals with one of them: A prophet has risen from the crowd, an enigmatic man who calls himself Lazarus and claims to have surfaced from “The Sinking”. The new cult is rapidly spreading and his right-hand man, a pudgy man who is called “the Mouth of Lazarus” contacts the PCs with a rather urgent request:

It seems like the deadly assassin “Deathbolt” was hired by a rival cult to make Lazarus very dead indeed and that said legend always uses a rather strange, signature weapon – a weird crossbow he always uses for his kills. While the authorities will be at the speech in the person of Judge Winch and his guards, he wants this additional insurance. Lazarus’ speech is impending and time is of the essence. The PCs thus journey to Deathbolts hideout (the location of which is conveniently provided by the Mouth), where they encounter some low-level thugs and finally find the strange weapon – sans bolts. Hopefully, the players are smart and smell a rat here. If they didn’t kill the thugs, they can easily find out that something is amiss.

The thug claims that he was hired by a man in the shy mermaid. The rather pompous and exclusive design of the weapon might point the PCs to the Castle Ward weapon shop, the only place in the city with sufficient expertise to create said weapon. While the weapon shop offers no clues per se, showing off the weapon to the respected craftsmen there might offer a way for the PCs to escape unpleasant consequences in the aftermath of this scenario… One of the girls in the shy maiden saw the face of the one who hired the thugs and, for a bribe of her madame, might accompany the PCs to the church of Lazarus, where the speech by now should be due. Further inquiries might have yielded a baffling absence of knowledge about any kind of “legendary assassin Deathbolt” in any area/social circle, which should provide another clue as to what is being played here, namely: The PCs.

The Mouth of Lazarus, actually a quite smart urbanist, has decided that the church would profit from a martyr, namely Lazarus. He plans to murder the prophet via one of his automatons, a thing called nail which by coincidence shoots the strange bolts that only a custom-made crossbow could – like the ones the PCs recently acquired. While the prostitute can identify the mouth, he has yet another contingency and tries to kill her as well. During the speech (in a sinkhole-adjacent, fully mapped church), chaos erupts when Lazarus drops dead by the Mouth’s ghastly ploy and he seeks to frame the PCs – who are stand-in in a crowd of enraged believers! The resulting finale and potential repercussions (after all, the mouth was clearly visible, unarmed and a judge is present…) might make for interesting complications beyond this particular scenario. Also, Lazarus’ spirit is seen sometimes, floating over the mysterious sinkhole…

Editing and formatting are very good, I only noticed 3 minor punctuation-style glitches. layout adheres to an elegant b/w-2-column standard and the quality of the b/w-artworks and maps is top-notch. The pdf comes fully bookmarked. Ascension of the Prophet is a prime example that an intriguing investigation can be done in just a few pages. The writing of Mario Barbati is concise and the adventure per se simply a nice little blast to run. Add to that the cool final encounter and we have n excellent installment of “The Sinking”. Taking the low price into account, I’ll ignore the very minor glitches and settle for a final verdict of 5 stars – well done!

The Sinking: Ascension of the Prophet is available from: