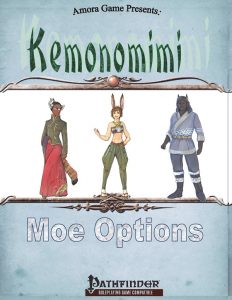 This little expansion for Amora Game’s Moe races clocks in at 6 pages, 1 page front cover, 1 page editorial, 1 page SRD, leaving us with 3 pages of content, so let’s take a look!

Well, for one, we begin with alternate racial traits – three universal ones would be provided; the affinity with the respective animals can be replaced with affinity with creatures of the kami subtype; similarly, another exchange allows for kemonomimi who have an easier time dealing with oni. Thirdly, low-light vision may be replaced with 60 ft. darkvision, but at the cost of being dazzled in bright lights.

Akaimimi with Wisdom scores of 11+ may replace racial skills and insightful question with 1/day SPs, namely detect psychic significance, guidance and mindlink. Replacing knowledge bonuses with +2 to Bluff and Sense Motive can also be found. Finally, insightful question can be replaced with a permanent undetectable alignment that reads them as neutral – which is strong, but pretty cool.

Araiguma can replace dowsing with better resistance versus ingested nastiness and the option to smell processed food at range as well as being able to function longer sans food. If an araiguma also replaces the racial skills, he can gain 1/day ghost sound, prestidigitation, vanish as SPs and thirdly, Escape Artist and Swim may be substituted for the usual skill bonuses.

Inumimi can similarly replace their skill bonuses with Heal and Spellcraft. Their SP-exchange-trait can net them alarm, protection from evil, resistance and thirdly, better atk, damage and SR-penetration versus oni as well as crit SR-negation complement the options presented here, but the more powerful options swallow repel misfortune.

Kitsunemimi may replace patient planner with the option to announce two actions when they ready; either may trigger the action, which is pretty cool. Their skill-exchange trait nets Diplomacy and Linguistics, the SP-trait covers 1/day mending, message and pass without trace. The nekomimi’s SP-trait nets deathwatch, disrupt undead and touch of fatigue. Instead of fortune’s favored, they gain concealment below 0 hit points, total concealment when dying and may 17day become incorporeal as a result to suffering a death effect. Pretty powerful – the second trait replaced forzune’s favored would allow 3/day reroll of all damage dice with a spell, attack, etc. – imho, this may be a bit too strong for what it replaces.

The tanukimimi ‘s skill-change trait nets Appraise and UMD, with charm animal, daze and lullaby being the respective SPs for the SP-granting trait. The third alternate racial trait nets Improved Unarmed Strike and Improved Grapple in exchange for the skills, which is hefty per se…but all classes for which this would usually be powerful have at least one built-in already, so I’m still okay with this.

The Usagimimi’s SP-trait nets create water, prestidigitation and unseen servant, with the skill replacement trait providing +2 to Acrobatics and Ride instead of the usual benefits. The third alternate racial trait provides Improved Sunder as a bonus feat and lets spells and abilities ignore two points of hardness – overall, a pretty powerful exchange.

-Convoluted Plan: This allows you to draw up 3/day a complex plan with up to Int-mod triggering conditions, in complexity comparable to a readied action or contingency (not italicized in the text); when said conditions trigger, you gain + Int-mod to a selection of checks potentially associated with that action and yes, the wording gets active and reactive conditions tightly and correctly codified. Nice one.

-Heritage of a Celestial Beast: Nets at-will detect kami. When cloaked in an illusion of an animal associated with your yokai ancestor, or polymorphed into such, you are harder to disbelief and wild shapes into the corresponding form can be activated as a swift action. However, this and the next feat are mutually exclusive.

-Heritage of a Mortal Man: No longer take a penalty to Disguise to pass as human and you gain the human subtype. Not even divinations detect you as anything but human. Similarly, illusions, alter self and similar effects that transform you into a humanoid form are harder to disbelief.

-Inspiring Tenacity: When using surprising tenacity, allies that can see or hear you within 30 ft. “temporarily gain hit points” equal to half character level + Cha-mod. Per se cool, though an explicit duration would have made sense here, considering the feat’s temp hit points are their own effect. Also adds +1 daily use of surprising tenacity.

-Shout at the Oni!: As a swift action, you may suppress a fear effect that would otherwise prevent you from acting properly, for a total number of daily rounds equal to Con-mod. If you have access to ki, you can spend 1 ki per round to keep activating it. Nice one.

-Eye for the Fortune’s Smile: Automatically notice luck bonuses on people as well as the ability to influence luck. You recognize when a random event was hampered with by luck and may use the corresponding racial ability +1/day. Really cool and has serious narrative potential.

Editing and formatting are very good, I noticed no truly grievous glitches. Layout adheres to a printer-friendly 2-column b/w-standard with nice full-color artworks from the original pdf strewn in. The pdf has no bookmarks, but needs none at this length.

Wojciech Gruchala delivers a fun and inexpensive expansion for the kemonomimi-races here, one that allows for the customization I wanted to see. While many of the alternate racial traits provide basically one skill and one SP-exchange trait, the SPs themselves are well-chosen and unique. Similarly, the third option usually does something fun and uncommon. The feats also are thankfully bereft of filler-material. Now, granted, I can complain about e.g. the SPs not being of the precise same strength, but I’d ultimately be stretching for something to nitpick. This is a nice, well-made and unpretentious little pdf, ultimately well worth a final verdict of 4.5 stars, rounded up due to the low and very fair price point. If you like the kemonomimi, then this is pretty much a no-brainer.

You can get this nice expansion here on OBS!

The original race-pdf can be found here!