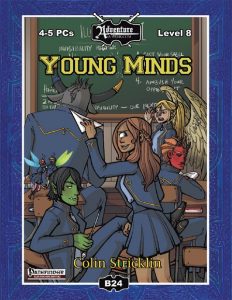 This module clocks in at 41 pages, 1 page front cover, 1 page editorial/ToC,1 page SRD, 1 page advertisement, 1 page back cover, leaving us with 36 pages of content, so let’s take a look!

This module, like Colin Stricklin’s previous offerings in the series, takes place in the city of Hordenheim, which is…let’s say, peculiar. If you have missed the excellent “Death & Taxes” and “For Rent, Lease and Conquest“, I’d strongly suggest getting them. The form a kind of unofficial trilogy and while they all are self-contained, their collective does paint a very interesting picture of the city.

All right, still here? Great! So, Hordenheim has a bit of a different take on undead and monstrous humanoids and is pretty much a cosmopolitan city – and as such, it should come as no surprise that the place does have its own university, Leverinac Metropolitan University (LMU) – it is here that the module takes place, with the campus being depicted in a truly gorgeous full-color map, player-friendly version included with and without compass-needle and name, so if you just want to scavenge the map, no problem.

We begin this module in perhaps the funniest scene I’ve seen in a module for quite some time. The adventurers are staffing a booth at a job fair, extolling the virtues of their chosen profession. I am not kidding. This can be absolutely hilarious for anyone who has ever had to staff a booth for a job fair…and the very concept is similarly just so funny to me. And it gets better. During the job-fair, dean Derthag Dwarfeater is introduced- Yes. He’s an orc. Obviously. Oh, and PCs can witness a harpy pranking a minotaur and have I mentioned Professor Fugglestone, the zombie lord teacher? No, I am not making that up. Better yet, it is said zombie lord who…expires (???) permanently. The PCs are tasked with finding out how the zombie lord was destroyed.

Thing is, among Fugglestone’s notes the PCs are handed a hand-out, an anatomic drawing of an intellect devourer, alongside several notes. You see, intellect devourers are described as hedonistic creatures, but require a host body to properly feel the respective sensations. The dean assumes such a creature to have infiltrated the campus, obviously underestimating the decomposition of a zombie host body sans animating forces/brain. The irony of an intellect devourer eating a zombie’s brain…once again is exquisite. It will hence be the PC’s goal to infiltrate the underclassmen and find sudden changes in personality etc. and root out the parasitic creature.

For the purpose of this, the PCs receive magical rings that revert them to age 17 (with minor stat-adjustments) – and the stakes are high, for, according to the notes, young may well hatch soon and replace the minds of some of Hordenheim’s most brightest! The PCs receive specially prepared alchemical nasal swabs they can use to find the right persons…but ultimately, getting people to agree to that will not be too simple. After all, a panic should be damn well avoided!

While the rings are detect magic-proof, the intellect devourer can still detect other items – so investigating the creature will not be simple. The PCs will have to juggle their courses and investigative duties (schedule of courses, in this, the semester’s last week, is not too busy). The schedule, just fyi, represents another cool handout.

The investigation itself is basically a fun sandbox – the respective areas do have their own read-aloud text, with a plethora of different pupils and instructors provided in a nice array of fluffy write-ups – from head librarian to bookish minotaurs and clumsy ogre, the array presented is nice. Rumors, both useful and patently false, circulate – and two factions, delinquents and honor students, will seek to recruit the PCs to their causes. The cool thing beyond that backdrop would be that three sample suspects, in detail, with different evidence and encounters, are depicted: The arrogant hall monitor, the elderly, mean-spirited janitor (who is also a mite) and the ettin-coach all have their own challenges and interactions and can lead organically to one another – when played at a con, you can just run one; otherwise, putting them in an organic sequence is very easy – and the different factions have different goals associated with the respective suspects.

Beyond all of that, the timer’s ticking and a barroom brawl with a chimera ( student at Trots Tech), a grand game of the local football-stand-in Hurly and an overachiever summoning hellhounds and fiendish dire lions at the same time…so yeah, beyond events and free-form investigation, much like a good Persona-game, you’ll have such events to juggle. The intellect devourer, once unmasked, may well try to panic and escape, trying to save its brood – but the witlings have hatched…and promptly consume their parent and make off to the ceiling looking for prey. Fulfilled faction objectives during the module will help the PCs establish their standing – the more respected they are, the more help they’ll receive…and they’ll need all the help they can get to prevent a full-blown body-snatcher scenario! The module ends, thus, hopefully with a graduation…and hey, when they unmask, the PCs may actually have gained a proper cohort!

Editing and formatting are top-notch, I noticed no grievous glitches. Layout adheres to AAW Games’ two-column full-color standard and the pdf sports several nice full-color artworks. The pdf comes fully bookmarked for your convenience and the cartography and handouts are high quality and neat.

Colin Stricklin’s third Hordenheim module is absolutely phenomenal and proofs that he knows what he is doing. One or two can be happy coincidences; three? Not so much. This module is one of the most hilarious and bonkers modules I’ve read in quite a while. It is rewarding, imaginative and has some many moments that made me smile, so many cool and creative ideas, it simply is a joy to read. It also can be a pretty amazing module to run for older kids that are not fazed by intellect devourers as a concept; ages 8+ should work well for all but the most sensitive of kids. That being said, adults will absolutely adore all the cool jabs at the education systems, high-school/college/university-stereotypes, etc. – this module is funny on so many levels and provides a thoroughly evocative change of pace.

Absolutely amazing. Seriously, get this module and get the first two as well, while you’re at it! My final verdict will clock in at 5 stars + seal of approval and the module, courtesy of its unique premise and creative execution. If you need a good laugh and a delightfully irreverent and unconventional module, this one delivers! The premise could carry a whole mega-adventure!

You can get this funny, unconventional and cool module here on OBS!

Missed the one with the funny undead? Death and Taxes can be found here!

Didn’t know about the one with the evil real-estate agent villain? It’s here!

(Seriously, all 3 are totally worth playing! Even if you don’t have a chance to play them, they’re worth their price for being amusing!)