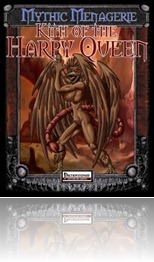 This pdf from Super Genius Games is 13 pages long, 1 page front cover, 1 page editorial/SRD, leaving 11 pages of content, so let’s take a look at the new winged creatures, shall we?

After one page of introduction, we get the first harpy variant, which at first seemed like one of those “Slap environment X” on a creature-variants. The CR 6 Cave Harpy gets a cool sonar-like scream and blood drain, though, making her sufficiently unique.

The second new harpy is the Glory Harpy at CR 2, resplendent and actually quite civilized humanoids far from their ugly common brethren, but devious nevertheless. The multi-hued wings and captivating display make for cute, yet deadly foes that are essentially made cool via their fluff more than via their crunch.

Father of harpies, Pazuzu, sometimes seems to father especially deadly, demonic harpies, his chosen. (CR 10) Their song is not only enthralling, but also lethal to any listeners and their polearm mastery along their poisonous stinger make them a viable threat.

The CR 8 Pestilence Harpy, a vulture-like harbinger of disease via claws, dust, song and even presence is just plain awesome – with a deadly aura, cool abilities like the cloud of diseased dust they constantly create and a neat write-up, they are a prime example of author Sam Hing’s good monster design.

Subtlety is not the name of the game for the CR 14 giant Piasa, whose call can flatten and even kill her foes – once again, the fluff about interacting at head-level with them makes what otherwise would be a good creature a very interesting one. Nice job!

The small CR 7 Storm Harpy glides among the clouds and can call dread storms as well as sleep while gliding in great heights. Again, it’s the sparse fluff that lends color to an otherwise well-written, but not too exciting critter – the cooperation with pirates and influence on naval trade are interesting plot points to consider and make them valuable assets and allies for scrupulous foes.

Harpies being civilized foes, that’s not where this Mythic Menagerie ends: We get 5 new magic items specially designed for or from harpies: From Feathered Daggers carrying diseases to shields made from quivers, they are neat additions to the female furies’ arsenal.

Furthermore, 6 feats are introduced, three of which belong to a feat tree that grants additional wing buffet attacks to flatten foes. Even cooler, Pluck-feats are introduced, offering FINALLY the option for aerial combat I’ve been looking for: Attacks to temporarily decrease fly-skills with the final result of having plucked foes crash to the ground as well as the 2 cool feats to improve song qualities. The Pluck-feats alone are pure GENIUS and I’d recommend the pdf for them alone.

Finally, 5 new spells (APG-classes included in the spell-lists) are introduced, offering a nice plethora of evocative, flavorful battle-spells: From quasi-real ravens that try to pluck your eyeballs out to a ball of wyvern stingers you can control like a flaming sphere, the new spells are iconic, neat and well-written.

Editing and formatting are ok – while the glitches that plagued the line are once again present in relics etc., there have been installments with more of them. Layout adheres to the two-column standard and the b/w-artworks are neat. The pdf has no bookmarks and the creatures feature no lore-sections.

This installment of the Mythic Menagerie-line is literally all killer, no filler – each creature had something going for it and the additional items and spells are top quality. The feats are downright brilliant. Were it not for the editing glitches, this would be a 5 star+ Endzeitgeist seal of approval-pdf. Due to the editing glitches, my final verdict will be 4.5 stars, rounded up to 5 – highly recommended if you have any affinity for aerial foes, not only harpies.

Mythic Menagerie: Kith of the Harpy Queen is available from: