Mythic Menagerie: Howl at the Moon 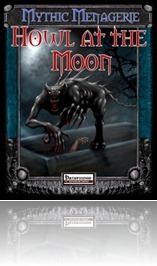 This pdf from Super Genius Gamesis 18 pages long, 1 page front cover, 1 page editorial/SRD, leaving 16 pages of content, so let’s check out the new lycanthropes author Sam Hing has conjured up, shall we?

The first foe, is actually not a lycanthrope in the conventional sense, but the lethal CR 19 Therainthropic Beast, a kind of omni-alpha for all kinds of lycanthropes, complete with abilities to control these fearsome cursed beings and change into any lycanthrope whose blood it has tasted. The fact that the second page of its write-up is mostly blank is a strange formatting decision that is repeated in later entries. While it means that you have the creatures collected on two pages per entry and no pages containing multiple foes, it also means that you need to print out more pages.

The second new creature is the Weredeimonychus that uses a ranger 4 as base-creature – now that’s unconventional, isn’t it? While the idea is quite cool and neat, I couldn’t find any ability that stands out or additional ability to speak of. They (as well as all other lycanthropes herein) come with two statblocks: One humanoid base form, one hybrid, but not the animal form. While not providing the animal statblock is a conscious decision, I can’t help but wonder if printing them in the copious amount of blank space wouldn’t have made the pdf more user-friendly.

The next type of lycanthropy is for the low-CR creatures and infects mostly Boggards (thus feeling a bit redundant) – the Werefrog! (CR 3) The tongue is neat and the idea quite cute.

Where the Werefrog was rather goofy, the Wereorca (CR 10) goes off the edge – while I can understand that Orcas can be intimidating and dangerous, the usually Frost Giant-afflicting curse will entail untold numbers of “Free Willy”-jokes. The artwork did nothing to counteract that, unfortunately.

The usually good CR 7 Wereowl, using an Oracle level 6 as a base-form, makes for a neat idea and comes with a lot of nice connotations, though no unique abilities apart from superior low-light vision.

The Werescorpion uses an ogre (CR 4) as a base-creature and spreads his curse via his stinger – following the base-creature, the hybrid gets a deadly array of natural attacks.

The next creature is a rather fierce foe – the storm giant based CR 14 Weretyrannosaurus! The idea is very cool and the dinosaur’s powerful bite makes for an iconic foe!

The final foe we get is the savage Werewolverine (using a barbarian 2 as base for the CR 3 critter), who makes a nice variant of the berserker.

Editing and formatting are very good, I didn’t notice editing glitches and I already commented on the blank space. Layout adheres to the 2-column standard and the b/w-artworks are mostly good, although not all are as well-made as the Tyrannosaurus one (WHICH ROCKS!). The pdf has no bookmarks.

You may have noticed that I continuously mentioned the base-creatures. Why? Because that’s all we get. This is a lycanthropic sourcebook sans templates, i.e. sans the crunch necessary to run the lycanthropy. While we get infected foes, we don’t get the necessary information we’d need to handle e.g. PCs contracting the curse or applying the curse to other base-creatures. While it would be potentially possible to reverse-engineer the curses and cobble together the templates from the basic lycanthrope template in the bestiary, that’s not something I want a pdf to ask from me. We essentially get monstrous humanoids and characters who are infected, but have no way to expand upon the curses. This, essentially, disqualifies this book as a lycanthrope sourcebook for me: Theriantropes have usually been distinguished from lycanthropes by the possibility of infection for characters/monsters vs. being a natural-born shapeshifting creature.

It’s a pity, really, that the cool bloodlines/curses won’t see any use in my game, as I considered the IDEAS behind most of them quite well done. Nevertheless, if you’re in for the curses and the ability to take the material and make it your own, this pdf will sorely disappoint you unless you’re willing to take the basic template and work out the individual strains. For me personally, this pdf was a terrible disappointment and clocks in as a 1 star file. Being a reviewer, though, I have to take into account that some people might only be in it for the statblocks – for you guys and gals, this is a 3 star-file. My final verdict will thus be a compromise and 2 stars.

Mythic Menagerie: Howl at the Moon is available from: