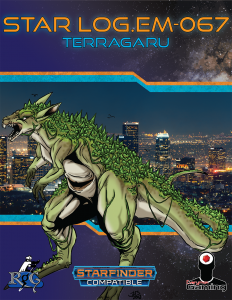 On the first page, we have a new size-category –Supercolossal. All creatures of this size are even larger than Colossal critters, and receive the Massive extraordinary ability. Creatures with this ability ignore difficult terrain and environment-based movement-impairing effects of up to 1/4th of a height or depth of the creature’s space. These creatures may not be flanked by critters that are Large or smaller, and receive +2 to AC against attacks from such targets. They also only take half damage from effects from such targets. These critters also get an untyped +2 bonus to all saving throws against effects with sources Large or smaller, and obviously, supercolossal creatures can’t be grappled by Large or smaller targets, and supercolossal creatures don’t gain the grappled condition when grappling or pinning Large or smaller targets.

This pdf contains two different statblocks – the first (and lower-powered one!) would be the Colossal Joey of Terragaru, a mighty CR 20 magical beast that has an extraordinary fly speed of 100 ft. via mighty leaps, a bulk that can hold literally more than a ton – 10, or 2K bulk, to be precise! Objects may be transferred to and fro as a swift action, and as a full action, the joey can attack all creatures in a 15-foot cone with the tail, using an ammo-less version of the automatic property to provide a properly contextualized AoE attacks with their tails…which btw. also can be used to grapple multiple targets, depending on target size-category. The joey doesn’t have space and reach noted, which *may* be a glitch or a conscious design decision, considering how it interacts with the adult terragaru. Odd: The joey has two subtypes noted that the adult Terragaru doesn’t have. This is probably a glitch. On the plus-side: I love that senses like blindsight (scent) have their ranges extended to a range that actually makes them sensible for creatures of this size.

The big terragaru is Supercolossal CR 25 monster that further improves upon the massive defensive qualities of the joey; the mighty leap has a whopping 500 ft.-range, and the big buddy’s kicks actually cause massive bleeding and even Constitution drain! Nice: While it also has mighty leap, it does not have the joey’s stipulation of needing to end on a solid surface, and thus has maneuverability noted. Easy to overlook – kudos for catching that!

Oh, and while speaking of small details I enjoyed: Being inside a joey’s pouch is a hassle, being inside the Terragaru’s pouch is deadly – if the joey is inside the pouch, that is! Kudos: Damage here is based on the joey’s presence, and as such uses the joey’s stats – it’s a small touch, easy to overlook, but I loved seeing it!

Their sweeping strikes can attack targets in a massive 250-foot cone, and these guys can even grapple multiple Gargantuan targets!  The massive being can attempt rerolls on failed saves vs. paralysis, petrification, polymorph, mind-affecting effects, etc. sans action, and 1/year, when they’d be reduced to 0 Hit Points, the terragaru can enter a lethargic state as a reaction, becoming nauseated, but also regaining a massive array of Hit Points, retreating into a kind of hibernation…but any attacks will end this state’s effects and retreat, and make the terragaru hit back for round #2! As a creature of massive size, every step of the vast creature is accompanied by a massive earthquake, and as a full action, they can not only leave a localized quake in their wake, but cause a massive 1-mile radius quake!

How does that work in SFRPG? Well, fret not, for pdf does come with a new 6th-level mystic spell, earthquake, which btw. may not affect e.g. environments like starships that sport no seismic activity. The spell does miss one thing in the conversion to SFRPG – the damage it causes should probably be typed as bludgeoning.

Editing and formatting are very good on a formal level, almost as good on a rules-language level. Layout adheres to the series’ two-column full-color standard, and the artwork is neat. The pdf has no bookmarks, but needs none at this length.

Alexander Augunas’ depiction of a massive kaiju kangaroo for SFRPG rocks – the massive monster is deadly, and I certainly can see it decimating whole invading fleets, as noted in the flavor text; similarly, I can see the besieged local populace of yroometji venerating the massive being as a destructive protector. The flavor puts a nice spin on this force of nature. While not perfect, this is a delightful and interesting critter-pdf, with some cool angles hard-coded into these creatures. My final verdict will clock in at 4.5 stars, rounded up.

You can get these delightfully weird kangaroo-kaiju here on OBS!

Missed the kangaroo-folk that you can play? The yroometji may be found here!

Enjoying my reviews? Please consider supporting my patreon. It keeps the lights on!