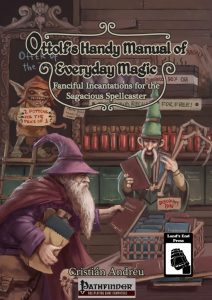 The freshman offering (and so far only one) of Land’s End Press clocks in at 32 pages, 1 page front cover, 1 page editorial, 1 page ToC, 2 pages of SRD, leaving us with 27 pages of content, so let’s take a look!

After a brief bit of introductory fluff, we begin with an elaboration of the unusual concepts depicted in this book: Exotic cantrips are cantrips that aren’t automatically available from the get-go – they are rewards and have to be sought out. Some spells herein are augmentable – much like psionic powers and e.g. many spells in 5E, these spells can be prepared at higher levels, which increases its potency. However, it still can be counterspelled by its regular version. Spells on scrolls and similar items that can be augmented are cast as per the creator using the spell in the item’s creation – if you used an augmented version, the item will also use the augmented version. The augments have the spell-level increase in brackets behind the augment-subheader. Finally, there are spells herein that have reversible effects: These spells allow you to spontaneously decide whether you want to cast the regular or reversed effect. The presentation of all of these concepts is concise and to the point.

Before diving into the spells themselves, we are introduced to the spells by class-list, with wizard/sorceror also featuring the schools listed – it is here one notices that this pdf has aged quite a bit: The spell-lists don’t even cover the APG-classes, much less the later ones, so that is something to take into account for players of the current iteration of PFRPG. It should be noted that generally, the utility magic herein centers on the lower spell levels – clerics, and sorcerors/wizards get 1 and 2 3rd level spells, respectively – all other spells are below that in their levels.

So, what do the spells do? Well, Abigail’s Discernible Tracks, for example, causes your footprints to emit a faint glow, with an augment allowing for additional creatures to be affected – basically a trail of magical breadcrumbs. Assort and Arrange also falls neatly in the realm of useful spells – it can be cast to affect a number of objects to align them according to your specifications: Think of that one as a magical “Sort by…”-function we all know from our PCs. Oh boy…I really wished this spell existed in our daily world…

An aura that makes you conspicuous, the hilarious beard on demand…there are some gems here. Also pretty evocative: Boffenpot’s Bubbleblabber, a spell that produces bubbles when you try to speak in which the words are visibly trapped – only to be heard when the bubble bursts. Problematic from a balance point of view: Spellcasters affected can’t cast any verbal spells, making this a pretty powerful level 1 save-or-suck-experience. Cool: Enchanting a chair to accept exactly one set of buttocks. A cantrip can create a 1-gallon-bottle to carry fluids around with you. Pretty cool: Bottling emotions, short messages or scents becomes possible as well. Connoisseur’s Savvy is a bit of a problematic cantrip, as it ruins any story that hinges on anything ingested, like poison – the cantrip identifies presences of magical ingredients and the precise nature and quantity of mundane ones in a meal.

Less problematic, but pretty cool: Instantly conjuring forth a massive diagram. Also pretty interesting: a cantrip that lets you talk in a made up language and seem really authentic, with the augment-option to have additional creatures, like allies, understand you – I don’t get, however, why Linguistics can’t be used to potentially decipher this one. Oh well. A spell that helps a steed or other creature know the way home is pretty cool. Creating a jumbled mess out of a string (or instantly straightening one out) is also nice. Underpowered for the level: There is a paladin spell level 1 that lets your armor glow and keeps it clean of blood. Yeah right, I’ll waste a precious slot I could use for bless weapon on that…

Speaking of issues in an otherwise solid presentation – bonuses, when present, do not adhere to the codified types – when I read “magical bonus”, I cringe inside… Creating an illusory raconteur to regale your guests is certainly nice for wizards that dumped that Charisma-stat hard. Speaking of cool ideas: ottolf’s insufferable guest: Get a flea-or cockroach-ridden sheet. Take it to a room. Cast the spell. Et voilà, a truly insufferable, prickish autonomous creature of your race and size, but not otherwise appearance or gender, that will provide a more than convenient alibi for whatever you’re planning. Everyone will remember it. I want to craft a module around that. Enchanting containers of alcohol to not spill the drinks would be another spell that could have saved many a keyboard or laptop.

At spell to make a target incapable of giving away money is also interesting, but since the effect seems to be based on teleportation, the spell should have the appropriate descriptor – btw.: Descriptors generally can’t be found in this book’s spell-blocks. Interesting: Making all your pockets have the same entry point, instant drying or falling through water (up to 60 feet) also make for uncommon options – and yes, the latter does cover interaction with snow and ice. A cantrip that lets you seem awake while you’re taking a nap is another spell I wish I knew in real life and gaining information about a person from the tombstone is interesting -and, surprisingly, will not break any investigations. A spell that enchants targets to perceive tasks as riddled with problems or an instant passage of seasons for a plant can be found herein alongside the zone of questionable truth, which fyi makes everything seems like a lie. The pdf comes with some nice appendices for permanency on objects/areas and self only as well as self and other creatures with associated gold costs and a handy index of spells.

Editing and formatting are very good: Rules language and formal language are excellent, but in the spell-blocks, there are minor deviations here and there – cosmetic ones, sure…but still. Layout adheres to a beautiful two-column standard with a parchment-like bachground that may not render this particularly printer-friendly…but still. This is a VERY professional-looking book. The artwork herein is original, with interior artwork being original b/w-pieces that illustrate some of the spells. The pdf comes fully bookmarked with nested bookmarks.

Cristián Andreu’s freshman offering looks like the work of a veteran – this book, from cover to cover, is exceedingly professional, beautiful and generally well-made. While some of the spells sport minor balance hiccups, they are few and far in-between and the spells themselves are professional, well-crafted, employ solid rules-language…what more? Well, what about covering all classes?

I noted that this had aged not too well, right? Well, this was released 2014. Yeah. If this had come out, I don’t know, in 2010, this would have been a milestone and cool, awesome, evocative. 2014? Well…exotic cantrips are established and augmentation…know from both mythic and psionic rules. Reversed spells? Seen that one before as well. The implementation is great – don’t get me wrong. It is not, however, that innovative any more.

This does not make this a bad book, mind you – far from it. But it does make it dated on release – no support for even the APG-classes, magus, etc.? Not cool. I don’t think that *ALL* classes need to be covered, mind you – but the APG is pretty much default, seminal – it is when PFRPG came to its own, became completely distinct from 3.X. So yeah. That is a BIG thing for me. It does not mitigate the quality of the spells herein…but it is a pretty serious flaw.

Anyways, how to rate this? Well, ultimately, this is, flaws aside, an impressive freshman offering – and as such, it does get a bit of leeway. hence, I arrive at a final rating of 4 stars – a good pdf that falls slightly short of greatness.

You can get this nice little book of spells here on OBS!