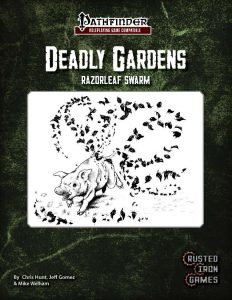 We begin this pdf with 2 different magic items, the first of which would be the garland of plant friendship – this particular garland protects the wearer and those nearby from aggression by hostile plant-life. The second item introduced would be the wasp dart, which is banded, poisonous and has a low chance of actually transforming temporarily into a giant wasp. As a nitpick, the item references a spell that has not been properly italicized.

As always, the pdf does feature a selection of different natural items, 8 to be precise: Charda packs can be sued as excellent cold packs. Really cool: Chimera manymind is a paste that can be applied behind the ears – this causes Int-damage, but also nets a chance to ignore mind-affecting effects. The destrachan’s harmonic flask splash weapon is a bit problematic – beyond the typo “Desrachan”[sic!] in the header, the item’s splash damage of 3 can be halved via a Ref-save I assume, rounded down.

Giant Fly eyes can be made into weird goggles – they penalize the wearer heavily (making you sickened and adding further penalties), but also allows the PCs to ignore miss-chances due to blur, etc. The spell-references here are not properly italicized, which is a minor hiccup. The item is also be pretty low priced for the power it nets. Girallon gunk helps with off-hand attacks, but penalizes the user’s Will-saves. Clothes made from griffon help in cold environments as well as with Acrobatics and Fly – very cool! Phase netting taken from phase spiders can catch incorporeal critters and razorleaf shuriken has a bit of a weird formatting and inflicts bleed damage.

Now obviously, the star of the pdf would be the new creature herein, the razorleaf swarm – the plant critter is a CR 5 swarm with seriously impressive 60 ft. fly speed. The really interesting ability of this versatile swarm, though, would be that the swarm can forego its usual swarm attack in lieu of a special assault that is a touch attack that may inflict bleed damage. Cool: This indeed does properly codify the interaction of the attack with swarm attack…and the creature has a nice Achilles heel that enterprising PCs can exploit to deal with the deadly threat.

Editing and formatting are very good on a rules language level, good on a formal level. Layout adheres to a 2-column full-color standard and the pdf sports a really nice artwork in b/w for the critter in question. Also really cool: The pdf comes fully bookmarked with nested bookmarks -kudos for going the extra mile there!

Chris Hunt, Jeff Gomez and Mike Welham deliver a cool critter herein and the supplemental material is also rather evocative. While the pdf does have a few minor hiccups, they are only cosmetic and as such, my final verdict will clock in at 4.5 stars, rounded up for the purpose of this platform.