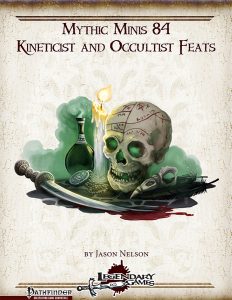 All right, you know the deal by now, right? 3 pages, 1 page front cover, 1 page SRD/editorial, 1 page content …though it should be noted that 2 feats can be found on the SRD-page. Got that? All right, let’s go!

-Delay Blast: When delaying a blast from 1 to 5 rounds, you can trigger it as a swift action; if you instead trigger it as a standard action, you may instead alter previously made choices, like target positions, infusions and shaping the area; you may also select your current position as point of origin. You also add tier to the blast’s dispel DC. For mythic power, you may delay the blast for up to tier hours. AMAZING one; very powerful, very flexible. Two thumbs up.

-Efficient Focus Shift: +1/2 mythic tier daily uses, +1 use per non-mythic iteration of the feat beyond the first. Also gain +1/2 tier as bonus to concentration after shifting focus. Nice one that rewards more flexible playstyle.

-Extend Resonant Power: You may extend the benefit of resonant power as though you had invested half as many points of mental focus in the implement to up to 1/2 tier allies. Alternatively, an ally within 30 ft. and you can gain the full benefits. You do not have to expend mental focus from the implement to pass the effect to a new target. Creative and cool.

-Extra Wild Talent: +1 wild talent whenever you take the non-mythic iteration; alternatively, you can elect to only gain a single wild talent that can be up to 1 level lower than the highest level one you have and the talent may be a simple blast or defense talent. Neat, though a lot of defense talents can be pretty strong in the hands of a proper player.

-Implement Focus: Choose two implement schools when taking the non-mythic version. Alternatively, choose one, but when wearing or wielding the implement, you gain +2 to CL and concentration when casting spells from the school whose spell level is lesser than the mental focus placed in the implement.

-Interweave Composite Blast: Immediate action option to interweave into the blast of an ally within 15 ft.; no readying required. Range may be increased to 30 ft. or allow the feat to work with an ally who only has the non-mythic version within 15 ft. The feat also lets you determine the point of origin of the blast at any point on a straight line between you and the ally. Pretty amazing one, whose rules-language I’ll use to upgrade the base feat.

-Kinetic Counter: use mythic power to use the feat as an immediate action; when readying, you instead gain +mythic tier to CL to counter the energy effect. Neat!

-Kinetic Leap: Use at will whenever you run, charge or withdraw; you also gain + tier daily uses. Also, when you expend mythic power, increase the bonus by +10 times your tier. Very cool stunts possible with this one.

-Parting Blast: When using the feat, you don’t gain burn and you may elect for your body to not be destroyed. If you accept 1 point of burn and expend mythic power, you may increase the radius to 5 times tier and ignore non-mythic creature’s DR, resistances and immunities. For accepting 2 points of burn and an equal amount of mythic power, you may add one or more infusions to the Parting Blast, though total burn cost may not exceed your tier. The infusions added do not require paying burn cost. Blaze of Glory indeed! Devastating and cool.

-Rapid Focus Shift: +1/2 tier uses, +1 per non-mythic iteration of the feat. You gain +tier as a bonus to concentration when taking damage during the transfer. For the expenditure of one point of mental focus from an implement, you may use the feat as a swift or move action instead. Neat!

-Strong Implement Link: Affects all implements of an implement school; add + mythic tier to concentration checks to cast spells from the school, even if they are further than 30 ft. away. 1/day expend mythic power to treat an implement you handled within 24 hours for 1 minute as though had selected this feat for the implement.

Jason Nelson tackles two of the more complex and hard-to-design-for classes that came out of Occult Adventures with these mythic feat-upgrades and while certain design-paradigms are used in some feats that are similar to one another, he went the extra mile to actually modify them and make them stand out. This flexibility is what elevates a book that is, craftsmanship-wise, exceedingly precise, to the level that makes it excellent. 5 stars + seal of approval.

You can get these cool mythic feats here on OBS!