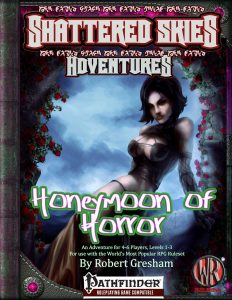 This brief module clocks in at 17 pages, 1 page front cover, 1 page editorial, 2 pages of SRD, 1 page back cover, leaving us with 12 pages of content, so let’s take a look!

All right, still here? Situated in the town of Brighton (which is available as PWYW), the backdrop of this adventure is one of a marriage has gone horribly wrong: The beloved cleric of the town, Lyrana, has caught the eye of the noble Silan Kranz and promptly married the man after a tumultuous courtship. It’s been weeks since anyone has seen the cleric, though, and people are getting anxious.

On the road to investigate or as an alternate means of getting into the scenario, the PCs meet an embittered old man and trade rival of Kranz, who has not much positive to say about him or his family for that manner – something that ties in well with the observation of some townsfolk, who noticed that the Kranz estate has too few minio…err…servitors to maintain in this pristine a shape.

The Kranz manor’s outside, depicted in copious read-aloud text (but sans map) is not welcoming…and it is a pity that the PCs can’t really explore it to piece clues together – instead, they are destined to run afoul of the stable boy Finneous. Odd: The pdf reprints the same text twice on one page – and we’re talking about three whole paragraphs! The statblock of Finneous, alas, has serious flaws and isn’t correct…oh, and the stableboy is CR 5 (!!!). Now this is okay for level 2 or 3, but for level 1, this guy can and probably will kill off a PC or two.

Among his possessions and with some observation, the PCs will be able to dive into the wine cellar of the estate, where the dungeon section looms…and DCs like 30 clearly show that level 1 is a damn bad idea for this module. The second encounter, just fyi, is a cloaker, which, while accounted for in the background story, comes completely out of left field from a player perspective and represents another TPK-machine for level 1 victim…ehr, players.

Oh. And there is a cloaker cleric at CR 7 next, which adds AoE damage as insult to injury…and he is supplemented by mooks. Yeah, even level 2 characters will have serious issues at this point. Oh, and then there would be Silan, a slayer, and his skum transformed uncle, who also has bloodrager levels. You see, Silan is destined to become such a monstrosity as well and thus has elected to join the cult. Anyhow, the combats here are similarly tough…and I guess that one of the females caught in this disturbing little dungeon would be the missing cleric. Btw.: Yes, the statblocks have pretty evident errors and formatting glitches.

Editing and formatting are decent on a formal level, though the doubled text and exact location of the target hostage are pretty bad issues. Layout adheres to a nice two-column full-color standard and the pdf comes with nice full color artwork. Cartography of the almost completely linear complex is serviceable, but we receive no player-friendly iteration. The pdf has no bookmarks, which constitutes a comfort detriment.

Robert Gresham, with “Cadditional writing”[sic!] by Liz Smith, has the basic deep one degeneracy set-up here and the prose, let that be known, is nice. The angle is old, yes, but its execution is decent enough for 2 bucks…were it not for the glaring glitches in the formal criteria. Balance of encounters is also utterly baffling. I’m the guy who always screams for hard modules; I love LotFP modules and similar old-school killer beasts. But this one is just dickish – the stableboy’s got 6 levels? Cloaker with class levels at level 1 or 2? Come again? The PCs have no chance to prepare for the challenges properly, meaning that there is only luck as a determining factor here; there is no Stealth-option, nothing the like – just a hackfest versus overwhelming, quite literally, odds. This can be won at level 1 or 2, but only by minmaxed monsters or very lucky groups. And that is not what makes a module qualify as horror. It’s just frustration. There is no build up, the module just slaps you over the head with “creepy” critters that make no sense from the PC’s perspective – they will never know how the cloakers got there.

I…I can’t recommend this module. I tried so hard t like this. It’s flawed in all important ways and I can literally point you towards several vastly superior FREE modules that are better at everything this tries to do. My final verdict clocks in at 1 star. If you want to support Wayward Rogues Publishing, get one of the Cultures of Celmae or the cult-supplements instead.