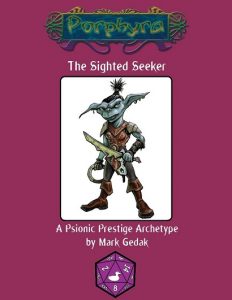 This prestige archetype clocks in at 13 pages, 1 page front cover, 1 page SRD, leaving us with 11 pages of content, so let’s take a look!

Wait, prestige archetype? Well, yeah. In case you’re not familiar with the concept, check out my page and a tag/quick search away, you’ll get all the reviews for them. Concept-wise, the idea is to basically roll a PrC’s features into a core class, making it more akin to an archetype/variant class. Originally invented by Carl Cramér for Purple Duck Games, this concept has been pretty intriguing…so let’s take a look at whether it translates well to the psionic context!

The sighted seeker as presented herein is based on the PrC of the same name and utilizes the chassis of ranger and marksman as basis. The class gets d10 HD, full BAB-progression, good Ref- and Will-saves and begins with 1 power point, scaling up to 99 at 20th level. Powers known-wise, we begin with 1 and scale that up to 13 at 20th level; the maximum power level available is 4th. Powers are chosen from the seeker powers list (with the noted exception of Expanded Knowledge) and the governing manifesting attribute would be Wisdom. Proficiency-wise, the class gets all simple weapons as well as all light, projectile and thrown martial weapons as well as bucklers and light armors. Skill-wise, they get 4+Int-mod skills.

At first level, sighted seekers receive Urban Tracking as well as their first favored prey – against said creatures, the sighted seeker gets +2 to Bluff, Knowledge, Perception, Sense Motive and Survival checks as well as +2 to atk and damage and save DCs. They may also make untrained knowledge checks against them. Humanoids and outsiders have the subtype caveat. At 5th level and every 5 levels thereafter, the class chooses another favored prey and increases the bonus granted by one of his favored preys by the same amount as above – the save DC-increase is pretty nasty, but in my playtest, the ability checked out, considering the low maximum power level.

At 5th level, a sighted seeker may expend 3 power points as a standard action, provided he is able to unquestionably identify a creature by its deeds – the traget creature becomes a mark and is treated as favored prey with an additional +1 bonus; if the creature is already a favored prey, the bonus increases to +2 instead. This ability, known as “Mark Prey”, enhances quite a few class features.

2nd level allows the sighted seeker to read the wind: While psionically focused to expend a swift action to gain a competence bonus equal to Wis-mod to ranged attacks until the end of the round, usable 3+ class level times per day. While I’m not a big fan of two attributes to atk, here this does somewhat offset the MAD component of the class. At 3rd level, the sighted seeker may gather information every 10 minutes while in a crowd, with bonuses pertaining marked prey, making them excellent hunters.

At 2nd level, the sighted seeker must choose one combat style: Finesse, Sniper or Volley are available: These diverge from the usual concept of combat styles quite a bit: At 4th level, they have a style skill: This skill gets scaling bonuses. Also at 4th level, each combat style gains a style technique, which can be activated via the expenditure of the psionic focus: Finesse seekers can use this trick to perform a selection of combat maneuvers at range, sniper can add Wis-mod to damage and volley specialists and volley specialists can grant themselves an additional attack as part of a full attack, but this does not stack with other abilities like haste…until 15th level, when it does. On a nitpicky side, this one does lack a few italicizations, but otherwise is precise.

Cooler and rewarding from a player’s perspective: Starting at 6th level, the sighted seeker gets a style mantra – this is a bonus that is maintained for as long as the prestige archetype maintains psionic focus: So yes, there is a reward for keeping and for expending it, making for interesting and valid tactical choices. Kudos! Each combat style also grants style abilities, the first of which is gained at 6th level, with additional ones being unlocked every 4 levels thereafter. Finesse seekers focus on tricks like negating uncanny dodge or adding negative conditions. Snipers can significantly increase the power output of single shots and shoot through creatures – a 10th level sniper (as a nitpick: The ability ought to note the level it’s gained, though it’s obvious from context) shooting a creature has a pretty high chance of annihilating it, as befitting of the concept…and sans breaking the math. Volley specialists can combine movement and less accurate attacks, split missiles, etc.

At 7th level, a specific array of powers gets a special new augment to make powers last longer and 8th level and every 3 thereafter net bonus feats. At 9th level, the class gets seeker’s analysis: Perception is enhanced with two new uses to find evidence and analyze material; similarly, Knowledge is enhanced – yes, this actually does make sense and provides non-combat utility, something often missing from martially bent classes. At 12th level, sighted seekers may expend power points to determine the authenticity of a given source and grant bonuses. 13th level unlocks quarry, 14th level 1/week hypercognition and 16th level provides remote viewing with enhanced potency versus the mark. At 18th level, metafaculty can be manifested 1/week and 19th level provides improved quarry.

The pdf comes with favored class options for blues, dromites, duergar, elan, femanx, forgeborn, half-giants, maenads, norals, ophiduans, qi’tar and xeph -all of which seem balanced and fitting, though there’s a cut-copy-paste-typo “unless the you has selected.” Cosmetic, though.

The pdf also features a sample character, Tikki Mantracker, a blue, who comes with a level 1, 5, 10 and 15 version.

Editing and formatting are the weakest component of the pdf – there are a precious few italicization/typo-level glitches, though these never truly hamper rules-language…which is precise, to the point and well crafted. Layout adheres to Purple Duck Games’ printer-friendly two-column standard, with the exception of the introduction page, which instead features a 1-column standard. The pdf has no art apart from the cover. The pdf comes fully bookmarked for your convenience.

Mark Gedak, master of Purple Duck Games, delivers one of the very best prestige archetypes released so far: The sighted seeker is a truly fun class to play: With combat utility and out of combat tricks, powers and an interesting action economy, balanced and versatile options and a diverse, yet focused niche, the class is very rewarding: The perfect bloodhound/hunter – equal parts relentless huntsman and Sherlock Holmes, the sighted seeker makes for a truly rewarding playing experience that does not fall into the traps such builds could feature. The class is fun, well crafted and rewarding both in and outside of combat, which is a big thing, at least for me.

All glitches that are in this book are cosmetic and while I wished the class had a unique capstone for each style, that ultimately is a personal preference and not something to hold against this pdf. In short: I *really* like this one – the few hiccups herein are minor and certainly do not hamper the appeal of this cool class. The class, just fyi, should work equally well in high fantasy and lower fantasy contexts, so yeah – nothing of significance to complain about. Ultimately, in spite of the minor hiccups, this prestige archetype is extremely rewarding: Hence, my final verdict will clock in at 4.5 stars, rounded up and since I really liked it, this also gets my seal of approval.

You can get this cool class here on OBS!