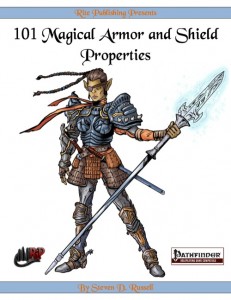 This pdf is 18 pages long, 1 page front cover, 1 page editorial, 1 page SRD and 2 pages advertisement, leaving 13 pages for the new enhancements to the magic items, so let’s take a look, shall we?

First of all, I have to come clear – I HATE magic item inflation. I mean, come on, how cool is a flaming sword if half the kingdom sports one? How special is an armor plus 1 if the local blacksmith’s apprentice wears one? In my home campaign ALL magic items that are not scrolls and similar one-use items have names. Subsequently, I have been a vocal advocate of unique magic items that bring back the wonder to the game, that make magic feel less like a stratified set of bonuses and do more than “cast spell xyz, 3/day”. I’m not the easiest audience for magic items and this pdf has a hard standing with me.

The pdf kicks off with a d%-table of the properties that shows you that base-price increments herein range from a modest 400 GP to the equivalent of a +5 bonus. The coolest design-innovation from 101 magical weapon properties has also been implemented here, i.e. the DCs, where applicable, of the items abilities, scales with level: DC=10 + 1/2 character level + attribute modifier. Excellent choice, as it keeps items from becoming obsolete.
An more in-depth look at the item-properties will immediately show you that some of the items deal with terrain control/economy of actions when it comes to movement – from additional 5-foot steps to 3/day extra move actions to a quality that lets you swim in an armor and breathe underwater, some nice new tactics are opened up by the new qualities. I expected as much, though Knight’s move is quite cool, letting you dimension door a move as a knight in chess would.
I also expected the two spiny enchantments that deal melee and ranged damage to attackers and the racial properties that work only for a set race (though their implementation is cool: Humans get a prophecy pool and add one to said pool for each 1 they roll – use the pool to change fate. Neat!). There are also enchantments that give you DR 5/slashing/piercing/bludgeoning respectively.

What I did not expect, was to get a new specific property for just about any armor-wearing class, INCLUDING APG, UM and even UC-classes like the gunslinger and samurai – very cool.

One of the most utilized enchantments, prismatic palisade, lets you once per day walk unscathed through anything prismatic and counter it. Iconic enchantments like energy absorption and minor shielding against draconic powers may be nice, but the pdf has more to offer: It’s the enchantments that truly stand out, that make you immediately come up with cool ways to use them, that are for me the stars of this pdf:

Ironheart for example, makes you the ultimate tough guy, converting up to 100 points of lethal damage to non-lethal damage. (And no, munchkins, it doesn’t work if you’re immune to non-lethal damage.) And then there are the extremely costly last resort enchantments: Involuntary Retribution and Safeguards – one lets you heal, one casts destruction on your foes if they drop you to negative hp. Ouch. Even cooler, there’s the martyr enchantment: You get automatically hit by foes and criticals confirm as well – but you also inflict maximum melee damage against that foe without an attack roll. No if that does not make for cool rp-moments and heroic sacrifices, what does?

Another favorite of mine would be the animated defense armor, that turns into an animated item when you are hit by negative conditions and follows a set of programmed instructions, i.e. carrying your dead body through a desert or shaking you from fascination. I can see the plots forming in my mind – very cool. And what about the shield that can be turned into an extremely fast sled for getaways or an armor quality that lets you phase through difficult terrain? There is also a quality to lessen the effects of penalties, halving them and mechanically, you get a lot of cool ideas.
My very own silent stasr of this pdf, though, are the vital warding and dramatic counter enchantments, the former of which, if you use critical charts or decks, lets you roll twice and take the outcome of your choosing. While not for everyone, it’s just one of 101 qualities and makes for a very cool thing to have if you use these rules. Dramatic counter lets you react once per day to an attack by vanishing in a cloud of smoke and makinga plus 20 acrobatics check to get far away. And Cheating Death is the ultimate enchantment for villains: 1/day negate anything that would kill the wearer, greater teleport and mindblank – OUCH!

Conclusion:
Editing and formatting are very good, I only noticed a case of a missing comma and a tab too much, but neither impeded my understanding of the content. Layout adheres to the full-color, 2-column RiP-standard and the artworks we get for some of the items rock. The pdf is extensively bookmarked.
What can I say? I was more than pleasantly surprised by this pdf. 101 magical weapon qualities was a nice pdf, but some of the enchantments felt a bit like filler – not so here. I think that each and every one of the properties has its place in a campaign and many actually offer enough evocative potential to make the enchantment worthy of its very own magic item – they just feel unique, stylish and cool and not like some run-of-the-mill bonus.

I’d usually rate this 4.5. stars due to the minor glitches. BUT: For the added tactical depth these properties offer, and the supremely cool ideas crammed herein by RiP’s mastermind Steven D. Russell, my final verdict will be 5 stars. Without the minor glitches I’d also add my seal of approval, but this remains a stellar offering that enriches just about any PFRPG game out there.