EZG reviews In the Company of Kappa

In the Company of Kappa 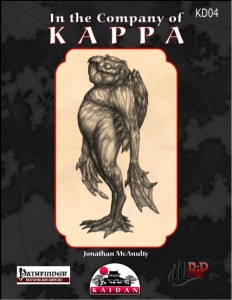 Note: This review details version V3, which has dealt with some issues of the original pdf.
This pdf is 20 pages long, 1 page front cover, 1 page editorial, 1 page SRD, 1 page ToC, 1 page back cover, leaving 15 pages for the Kappa, so let’s jump in.

The pdf begins, as all the ITC-pdfs, with an aptly-written IC-introduction to the race and, indeed, their outlook on religion, alignment and the like is presented IC as well, helping one to immerse in the feeling of the race. We even get an origin myth. This takes up 4 1/2 pages. The editing glitches of the old version have been taken care of.
On to the racial traits of the Kappa:

Kappa get +2 Str, are small, have a movement rate of 20 ft., low-light vision, +2 natural AC, a swim speed of 40 ft. and +8 to swim, don’t get the small-penalty to CMB and CMD but rather a +1 bonus, always treat stealth and survival as class skills,, have a natural claw attack that deals 1d3 damage, weapon familiarity with Kappa weapons and can be weakened by successfully draining the bowl on their head of water, resulting in Str and Dex-damage.
They come with 5 alternate racial traits:
-Goblin Nature: +2 Dex -2 Wis, goblinoid subtype
-Hard-shelled: natural AC-bonus rises to +4, speed drops to 15ft., swim speed drops to 30 ft.
-Kami-friend: Replaces natural wrestler; Ability to cast dancing lights, ghost sound, pass without trace, and prestidigitation 1/day and a +2 bonus against enchantment.

-Soft-shelled: Only get +1 natural bonus to AC, but gain a plus 2 bonus to acrobatics.

In the table containing the ages and heights, there is a editing glitch, putting the “age” from “Maximum Age” in the beginning of the next line instead of e.g. in the blank space below “Maximum”.

In the next section on Kappa adventurers, we get their attitude towards the different classes and how frequently they usually follow the specific calling. As a nice bonus, each class is presented with a Japanese-flavored moniker. To my pleasure, the APG-classes have also all been covered here. Two thumbs up for this!

After that, we get 14 new favored class options for the following classes. Alchemist:1, features a missing “+” sign to fit in with the formatting of the rest of the pdf, the same goes for the barbarian; Barbarian:1, Bard:1; Bone-Breaker:2; Cleric:2; Fighter:1; Ranger:2; Sorceror:2; Wizard:2

After that, we get 2 new class archetypes:

We also get a new Sorceror-bloodline which I found surprisingly cool – you get enhancements to AC, eventually even DR, water and earth-based resistances and even cold claws and an antimagic shell. The capstone ability is also nice.

After that, we get to the crunchy heart of the pdf, the 20-level racial paragon-class, the Bone-Breaker. Unfortunately, we have yet ANOTHER editing mistake, the first paragraph, including the header of the class, is printed twice, once at the bottom of the left column on page 13 and once on the upper right column.

They get d8, 4+Ints kills per level, medium BAB-progression, a good fort- and will-save, improving unarmed damage and bonuses to natural AC. Their table features another formatting glitch, with the columns of the individual stats not being in line with the headers of the table and “damage” from “Unarmed damage” being located under “Will”, “AC” from “Natural AC” being located under “Unarmed”. This has, as of V3, not yet been fixed.

The bone-breaker class is focused on, surprise, breaking things (bones in particular), but also gets a ki-pool, the ability turn into turtles and water, abilities to temporarily enhance its Str-score. The ki-pool section features blank place-holder blocks instead of hyphens in front of the options available.

The new incarnation of the bone-breaking abilities as combat maneuvers rocks, is balanced and improves via the levels in a balanced manner without relying on wild DM-fiating. All the problems I had with the old mechanics are gone and as an additional benefit, the ability actually encourages only subduing enemies rather than killing them, something I absolutely love and encourage. After all, good guys shouldn’t kill everybody, right? 😉

I’ll move on to the 10 new racial feats:

-Greater Shell and Shield: “kappa” in the prerequisites should read “Kappa”. Gain cover when equipped with shield as long as you are not in melee. Nice idea.
-Improved Natural Armor: +1 Natural AC

-Kappa Crawl: Move at full walking speed when prone, reduce AC-penalty to minus 2; Great idea. “Prerequisites, Benefits” and “Normal” should be bold, though.

-Kappa Kiyup: Big brother of kappa crawl, no more Ac-penalty while prone, standing up provokes no attack of opportunity and is a free action.

-Master Shrinekeeper: When within reach of your shrine, you get a bonus to channel energy and DCs.

-Practiced Swimmer: While the wording of this feat once was rather ambiguous, it now is easily understandable. “Prerequisites, Benefits” and “Normal” should be bold, though.

-Shell and Shield: Gain partial cover when equipped with a shield. nice.

-Shrine-keeper: Attaches you to a shrine – when close to it, you gain +1 DC to all spells you cast. Boring.

-Swimming Jump: Jump from the water, Dolphin-style. Nice one. Why is there no charge-follow-up-feat? Would have made a nice feat-chain.

-Turtle Speed: Run while being prone or on all four limbs, gaining a +4 AC bonus against ranged attacks.

Finally, we get two new Kappa weapons. The Kappa dagger, which can be used under water with no penalty and the Kappa net. Thanks to a new piece of artwork and additional text provided, I now actually know what the web does and like it.

The layout of this file is beautiful and Japanese-themed, plus, it is actually full-color. The cover artwork is stunning and made me see the Kappa with whole new eyes. The IC-writing filled me with anticipation, which in the revised edition, has been more or less fulfilled – while still plagued by the odd layout and editing glitch, the mechanics no longer suck, most of the mistakes have been taken care of and the file has improved a great deal, proving that RiP is not content to let glitches slide and just move on. Thus, due to the several improvements made, the complete rewrite of the core mechanics of the class and the significantly less editing and layout glitches (though there still are some left…), I’ll upgrade my review of this pdf to 3 stars.