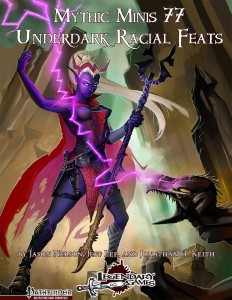 -Giant Steps: Add tier times 5 ft to the increase in base speed…which may be a bit much.

-Improved Drow Nobility: Choose 1/2 tier racial SPs and use mythic versions of them via mythic power; also learn those as mythic spells, if you can cast them.

-Shadow Caster: Numerical escalation for shadow-subschool spells and DCs to dispel them; + full tier level for mythic power; higher CL for purposes of checking for darkness-suppression. “Darkness” should probably be italicized – it looks like it specifically refers to the spell.

-Spider Step: Freedom of movement through webs and climb on them at climb speed; power spider climb uses via mythic power.

-Stoic Pose: Use it sans spending 5 rounds finding a suitable location while in rocky/underground terrain; at higher tiers, you also gain mythic power based spell-duplications as supernatural effects. Nice one!

Jeff Lee, Jonathan H. Keith and Jason Nelson’s underdark racial feats are pretty nice, though they do not reach the creativity and diversity of e.g. the installment on orcs, probably also due to the base feats in question – hence, my final verdict will clock in at 4 stars for a good, in not exceptional, mythic mini.