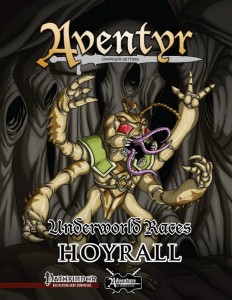 As with the other installments of the Underworld races-series, this one kicks off with a massive mythology of the subterranean races, a collective origin history that can be potentially transplanted from Aventyr into other settings, should one choose to do so. So what are the Hoyrall? Apart from an interesting name (if you’re Scandinavian or familiar with the languages, you’ll get what I mean), they are a race of parasitic creatures from the stars, brought here and held in check by otherworldly entities whose struggle goes far beyond what has been gleaned from other Underworld Races-pdfs – the extended origin myth of them is AWESOME, full of grand ideas and the stuff of myths – fluff-wise, a glorious beginning.

The insectoid creatures had their hive-mind kind-of sundered and today, individualism exists – and hence, the potential for PCs. Rules-wise, these guys receive +2 Dex and Wis, -2 Str and -4 Cha, count as humanoids and aberrations, are small, have a land speed of 30 ft and a climb speed of 20 ft, 60 ft darkvision, get scent to sense creatures below 25% HP or carrion, are light-blind, get +1 natural armor, stonecunning, +2 to saves versus mind-influencing effects and two rather iconic tricks – number one would be the option to use their own blood con-mod times per day to deal 1d2 dex-damage for 6 rounds, 1 save to cure, scaling DC- cool. More important, if you’ve seen the cover – these guys have 4 arms. How do the authors balance that to prevent them being utterly broken chainsaws of shredders? All hands but one are off-hands and for every hand beyond the first used, they incur -3 to AC, CMB, CMD and ref-saves until the beginning of their next round. Yes, this adds a whole slew of power attack/expertise-like math to playing these guys. And no, they may only can one spell at a time – no dual-casting, thankfully. This makes the Hoyrall overall very effective fighters, but it also is balanced via light blindness, str-penalty etc. and in my game, they did not unbalance things – for this was one of the races that required a playtest to properly judge.

The array of FCOs is universally solid and we also receive the Siktauryi Specialist archetype for Gunslingers – but what are those Siktauryi? They are essentially stingray-like guns that fire globs of acid, which is made from POISONS. You feed these things POISONS to make acid. Awesome. Especially since more potent toxins increase the damage of the globs of acid. As living creatures, they can be healed (!!!). Another cool piece would be mated carapaced organic growths that allow for long-range communication – think living walkie-talkies. Yeah, awesome! But back to the specialist: Bred to work with siktauryi, these Hoyrall cannot benefit from poisonous blood, but they can directly feed the siktauryi via their modified hands and later, increase their “reloading” speed. I’m sorry. This reviewer Is just grinning from ear to ear right now – little, 4-armed insectoid psychos with living guns? THIS is what I review for. Weird, awesome and oh so cool!

A total of 6 racial feats allow for less penalties when using multiple arms, better feinting or carrion sense, increased blood toxicity, bonus damage when feeding one’s siktauryi with one’s own toxic blood and covert communication via antennae – iconic, interesting feats – nothing too strong, nothing too weak. And yes, if you want to burn 6 feats, you can get rid of all the penalties for multiple arms…you’ll be a mean little shredding chainsaw of a hoyrall…but you’ll be 6 feats poorer.

3 unique items allow people to utilize hoyrall antennae communication, draw forth infinite daggers (which dissipate again) or receive a hoyrall phantom limb that is, indeed, a ghost of a limb – it acts as a +1 ghost touch longsword! Cool idea!

Finally, we receive 6 new spells, three of which are devoted to emulating degrees of a hive-mind, while one nets you a fascinating carapace, one allows you to spit poison and one nest you a prismatic gaze attack – the last spell may be a bit strong for the levels associated with it, depending on your campaign’s power-level.

Editing and formatting are very good, I noticed no significant glitches, though a couple of minor glitches can be found herein. Layout adheres to a drop-dead-gorgeous two-column full-color standard with rocky borders and awesome graphic elements, making this a beautiful, if not very printer-friendly pdf. The plentiful original pieces of full color artwork throughout the pdf are nice. The pdf also comes fully bookmarked for your convenience.

YES! *THIS* would be Mike Myler at his very best – the rules are solid and make multi-arm characters work. The fluff is GLORIOUS and inspired. The items are winners. The archetype is brilliant. The spells are cool. This is the Underworld Races-series at peak performance, with new, cool fluff, awesome crunch and, in spite of the very powerful benefits, a balanced race. This pdf had me grin from ear to ear and while it is not long, I guarantee that this is one of the coolest races you’ll have seen in a while. The Hoyrall are so unique, so distinct, I *had* to introduce them into my campaign. Forget the Thri-Kreen, these guys are so much cooler! (Also: They are not broken.) While not all rules herein are perfectly streamlined with established PFRPG-canon, the reasons for deviating are unanimously due to maintaining balance, while allowing you to play and do things no other race can do.

This is AAW Games at its best, well worth 5 stars + seal of approval.

You can get this odd, weird, but oh so cool race here on OBS!