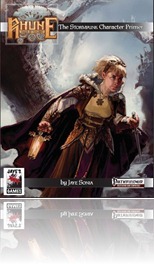 This pdf from Storm Bunny Studios is 53 pages long, 1 page front cover, 2 pages editorial, 1 page ToC, 1 page dedication, 1 page SRD and 1 page back cover, leaving a total of 46 pages of content, so let’s check this out!

I’ve been wanting to do this particular review for a long time, but got derailed time and time again. I’ve first heard about the setting of Rhûne on the GMS magazine podcast when I only recently got to make the acquaintance of GMS’ Paco Garcia Jaen and ever since, have been scouring the internet for signs of a Kickstarter, the worldbook etc. – why?

Well, the world of Rhûne is interesting to say the least in that its genre simply hasn’t been covered – the term coined is Stormpunk, which is essentially a blend of Norse myth and steampunk, of the topic of technology vs. magic and racial tensions, of destiny vs. free will. Ragnarök is looming at the horizon of Rhûne and tensions are brewing high between the conservative Ælves (+2 Dex and COn, -2 Cha, 25 ft. base speed, darkvision, +2 to survival and Knowledge (Nature), unlimited pass without trace in forests and agelessness in forests and 5 minor spell-like abilities for those of Wis 11+) and the dwarves and more progressive elements of the world. Other new races are the Aryndai (+2 STr, +2 Con, -2 Cha, darkvision, +4 to stealth at night, improved ability to influence spiders and the ability to change into giant spiders), a race of spider-affine shape-changers, the clockwork elves (+2 to Dex and Int, -2 to Con), low-light vision, +4 to all craft skills, +2 to Knowledge (Clockworks) and disable device and +2 to spellcraft to identify clockwork devices and perception and a penalty when casting from druid and ranger spell-lists – having passed the clockwork gates and activated the indomitable Ragnarök clock, they are a race both driven and tragic. The final new race covered in this book are the Glitterfane: Redeemed goblins, now beautiful and fey-like in appearance, these beings get +2 to Dex and Wis, -2 to Con, are small, slow, can fly at 15 ft., get +2 to saves vs. illusion and +1 to the Dc of their ones, gain +3 to heal and improved healing and, if their wis exceeds 11, can cast 4 different spells as spell-like abilities. Age, height and weight-tables for all the races in Rhûne are provided as well.

A total of 12 firearms, all with their respective, unique artworks are also provided, though it should be mentioned that some have Str-requisites to properly use. The role of all classes in Rhûne is also discussed in explicit detail, as is the specific nature of planar travel to the 9 worlds and the concept of the so-called elder runes, all of which provide a prophetic clue and significance. Short write-ups of the different factions at odds in the setting are covered as well as the pantheon of Rhûne, which consist of the 7 Æssinyr, old gods and goddesses and the so-called thrall-lords, evil demigods that got changed by the great beyond (add possible dark tapestry-influence here) and now seek to usurp the power of the old lords and ladies – cool concept, especially when recycling the Norse mythology/adapting it would also have been a distinct option. I’m glad that author Jaye Sonia didn’t, since OD’s Midgard already does a tremendously good job of using Germanic/Scandinavian mythology. Even cooler, the gods all get their own banners/holy symbols depicted in their respective write-ups.

Editing and formatting are very good, though not perfect: I noticed a minor glitch here and there like a racial ability not bold. etc. Layout adheres to a two-column standard and is in full colour. And here I take a sharp break to comment on the artworks: They are awesome. All the artworks herein are to my knowledge original pieces. Each race gets its own artwork. The weapons get their own artwork. The cartography is done by “Lords of the Maps” Jonathan Roberts of Fantastic Maps/A Song of Fire and Ice-fame. Wow, just wow. To see such quality artwork in a free primer is awesome indeed and makes me even more excited about the setting. The pdf has ext5ensive nested bookmarks for ease of navigation. Now, if you’ve read this far, you’ve taken a look at the respective races and perhaps noticed that the racial modifiers/abilities seem a bit different and peculiar and indeed: The races feel a bit on the powerful side. However, the fluff and harsh cultural distinctions between factions and ethnicities point towards soft balancing factors like availability, prejudice etc., thus I can’t yet comment on the final balancing.

I’ll make no big secret out of this: I love Rhûne. Reading this primer was one of the rare cases of jamais-vu I’ve had these days and provided me with enjoyment and anticipation beyond any scope I expected to get from this pdf. Better yet, where the setting could have been content with just meshing two genres and be done with it, it only takes the broadest of concepts, blends them and creates something wholly original from the results by expanding ideas and twisting them. My only concern at this point is that author Jaye Sonia should take the utmost care to get the crunchy bits right (hint to some of the crunch-gods out there: Care to take a look?)- the fluff definitely is awesome. Also, I really hope that UM and UC get their support in the final version of the campaign setting since the primer was created prior to the release of the two books and I think that magi and gunslinger fit very well into the setting. Now all of this being said, I strongly urge you to download this free primer, read it and enjoy the cool, imaginative world presented herein and hope for a release of the whole setting “when it’s done”. Especially for a free pdf, this is a blast and might provide prospective DMs with some peculiar ideas indeed. My final verdict will thus be 5 stars + endzeitgeist seal of approval.

The FREE Primer is available here: