Rituals of Choice II – To Kill or Not To Kill 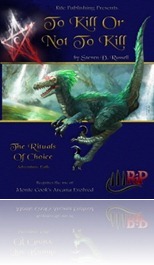 This adventure from Rite Publishing is 46 pages long, 1 page front cover, 1 page editorial, 1 page SRD and 1 page back cover, leaving a total of 42 pages of content, so let’s check this out!

This is my second review of one of Rite’s excellent Arcana Evolved adventures, which I’ll also review with specific consideration for the PFRPG-audience. Thus, this review contains SPOILERS. Potential players might wish to jump to the conclusion, while idea-starved GMs are very heartily encouraged to keep reading!

All right, still here? Good! Claiming their deed for Plungedeep Manor after the first module, the PCs return to town after experiencing a staggering array of choices and omens in part I. Even if you want to play this module as stand-alone, you’ll be provided quite a bunch of different adventure hooks – 10 to be precise and all of them go beyond the standard.

Following the theme of dreams, the golden jackal returns in a dream and points the PCs towards a murder most foul – by being pounced and dream-dying – it is this attack that delivers the first clues to solving the complex mystery underlining the plot of this module. The Catchpole of the village of Far-Rough, Gavel Taverson, a Totem-Warrior (could easily be substituted for an animal-focused ranger/druid, btw.!), is investigating two recent murders and is fearing that a rune-marked sacred grave talon called Solange might be responsible, which is doubly problematic since that happens to be Gavel’s totem. Worse yet, Gavel might actually be the first suspect as a totem warrior – shapechanging, sickles – has he gone off the deep end? Things get worse, when the PCs find the remains of visiting nobles and tracks of a grynloc-child. Breandra Neverhold, the ostrich-riding faen-woman (fey-like creatures) and daughter of the first murder-victim should be among the PC’s first addresses. For a GMs convenience in running the murder mystery, each of the Npcs has extensive information on them, concisely presented, summing up what would make them suspicious, which clues to the puzzle at hand they can deliver etc. – means, motive, opportunity, all bases covered. Lord Golhia and the other Npcs don’t make things easy for snooping PCs, as many secret allegiances want to be kept silent by their respective owners. Fret not, though: If the PCs get stumped a dreamhunter named “Rosie” will help them track the killer and the lead points toward the eerie floating forest where, on a vast tree fallen between waterfalls, they will have to negotiate with a deadly balde-troll and his giant hornet-riding goblin henchmen Once the PCs have crossed this bridge, they may encounter the caves of the greenbound Qwayneel, where they can extract a dread parasite from an animal and encounter e.g. the potentially lethal bone vipers.

The true conundrum is laid bare, though: Faced with overwhelming proof, Gavel is on the way to end his career as a totem warrior – while the greenbound wants the PCs to refrain from attacking Solange and instead hear the intelligent, rune-marked animal out. It turns out that the deaths of the nobles can indeed be attributed to the sacred beast, but the death of e.g. the children are not Solange’s doing – these can be attributed to another Deinonychus, one infused with the power of 3 dread runes – depending on the job the PCs have done while investigating the crimes, they make actually take the work off this beats, witness the fall of a totem warrior and death of a sacred runemarked creature or something completely different – they have the option to kill or not to kill: Every creature in the module.

Editing and formatting are top-notch, I didn’t notice any glitches. Layout adheres to a beautiful, full-colour 2-column standard with brilliant full-colour artworks and awesome maps by Jonathan Roberts. The pdf comes fully bookmarked.

“To kill or not to kill” has not been nominated for an Ennie for nothing: This module is a joy to behold with an interesting murder mystery that is easy to run, challenging, does not succumb to overtly generalizing b/w-dichotomies and feels logical. Better yet, the respective characters ooze iconicity, the emphasis on choice between life and death, violent and non-violent solutions and the smart usage of dreams as hints make this module an absolute delight to read, while sacrificing none of its predecessor’s awesome, dream-like quality to its usability. Indeed, I maintain that with a minimum of work, just about any DM can convert this module to PFRPG and enjoy one of the best murder mysteries out there. Even if you don’t want to check out the “Rituals of Choice”, even if you play PFRPG and not Arcana Evolved, this module still will be a blast to read and run – try as I might, even if you take the time it takes to do a conversion into account, this pdf remains a superior example of adventure-craft and writing and even for PFRPG-DMs, this should be considered a straight 5 star-recommendation, + seal of approval. If you haven’t already, go check it out – this is one of the modules that will be considered a “hidden gem” in the years to come.

To Kill or Not To Kill is available from: