SGG Presents: A Brace of Pistols 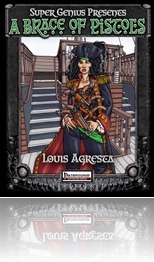 This pdf is 15 pages long, 1 page front cover, 1 page editorial/SRD, leaving 13 pages of content, so let’s check it out!

After an aptly-written piece of in-character prose, we are introduced to a brief historic introduction of flintlock muskets and pistols, including an artwork as well as a step-by-step description on how they actually work – don’t fret, though: While interesting to read, the pdf loses no time to introduce us to a series of new early firearms: From 4-to 8-barrelled Duckfoot-pistols (spreading out shots) to derringers, Jezails (long-barrelled muskets with a curved stock that can be tucked under the shoulder) and short-barrelled muskets (called musketoons), we get a neat selection of them – coolest among them, at least in my humble opinion, being the boarding gun – massive, made to be used as a stationary weapon, it takes a lot of time to reload and when not braced against a solid wall or something like that, damages the wielder with its massive recoil – the damage and spread, though, make this usually stationary weapon an interesting choice for adventurers nevertheless.

After introducing these new types of flintlocks, we are introduced to a selection of new firearm options: If you wanted to have a cane, a codpiece or a similar inconspicuous pistol concealed in a regular piece of clothing or jewellery, rejoice, for now rules are provided to do so. Creating gun traps for doors, chests etc. as well as adding spring-loaded bayonets and even axes/maces and all other kinds of melee weapons to flintlocks is also covered in this section, as is the option to add a second trigger (for sniping). My favourite, though, would be the mortar cup, which enables one to shoot bombs and similar alchemical items – very cool!

Of course, flintlocks are not only weapons and modifications – they also cover supplemental equipment: 3 new types of holster and belts that hold lead balls and prepared shots are covered, as well as silk patches and slow matches (which burn longer and can be woven into one’s beard for a bonus to intimidate) as well as cleaning kits. Cleaning kits? Yes, for two optional rules I personally enjoy are part of the deal: Catching fire with flintlocks as well as the influence of bad weather, dirt etc. – the upkeep of a flintlock, cleaning it etc. after all was a significant factor in their effectiveness and thus, these rules make for a cool, albeit wholly optional addition to one’s game. Speaking of additional rules: Another optional one is the one to allow rogues and similar characters to perform ranged disable device checks to shoot open locks.

And then there are 4 new feats: “Pistols at Dawn” makes you a master of formal duelling, “Get the Drop” enables you to get a bonus to initiative and make a single attack against an opponent instead of your regular actions and then there is “Powder Burns” and its “Improved” variant and damn are these two cool: If you shoot an opponent, you may make a secondary attack against an adjacent opponent, dealing fire damage and temporary blinding said foe. Cool tactical options that come with interesting rules and feel balanced. There are also two new spells, “Imbue shot” (lvl 5) and “Greater Imbue Shot” (lvl 7) that enable you to imbue spells into bullets and in the greater version, even have your shots deal no damage, instead delivering beneficial effects to the person hit. The tactical options these spells provide are rather interesting indeed. The pdf also contains two new magic weapon properties: Auto-loading, you guessed it, eliminates the reloading action, enabling you to make full attacks, while the Everdry-enchantment keeps powder-weapons, again, you guessed it, dry.

That’s a lot of cool crunch, but there’s also stellar fluff to go with it: The pirate game of Mahga-mahga, a brutal game of intimidation, torture and potentially death that involves a captive, a chandelier, a lot of grog, a cabin boy/girl, a charcoal stick, a lazy susan, rope, dice and an optional cleric. I’ll give you a hint: The captive gets some marks that indicate areas that are hard to hit and assign point values to them. The chandelier will be spinning. Powder burns and greedy grabbing for gold are also expected, as is the wanton consumption of grog. Better yet, the game utilizes the new powder burn feats to maximum capabilities and comes with rock-solid rules to handle this sadistic pastime in-game. Want to know how it works? Buy this pdf. 😉

Editing and formatting are very good, though not perfect: I noticed two minor typos. Layout adheres to a 2-column standard and provides nice full-colour illustrations of most of the new weapons and pieces of equipment to further illustrate them. The pdf is fully bookmarked, which is a big plus in my book. First of all: Yes, I’m a sucker for firearms and deeply entrenched in the pro-gunslinger camp. However, if you take a look at e.g. my review of NNW’s take on the Gunslinger, you’ll realize that I’m anything but forgiving when it comes to faulty rules.

“A Brace of Pistols” is an interesting pdf – in just a couple of pages it gives a concise presentations on how the weapons worked, adds a slew of new ones to the mix (including rather innovative rules) and delivers stellar customization options for your gunslingers and scurvy pirates. It is said customization options that are, on my opinion, the star of this pdf – don’t get me wrong, I enjoy the optional rules as well, leaning more to a simulationalist style of gaming myself, but they can be easily ignored if you don’t like them. The spells are neat and especially the powder burn feats are awesome as well, but along the cool game, it is the option to finally have a codpiece (or even eye-patch)-pistol that made me grin like a shark. Louis Agresta has created an awesome little pdf that could just as well be used to depict steamwork-crossbows and steampunkish weaponry and succeeds in delivering a variety of new tactics that are guaranteed to enhance your enjoyment of flintlocks in your game. For fans of the gunslinger this is a must-buy and for everyone remotely into swashbuckling and some of its not yet covered aspects, this pdf is gold as well. If what I told you about even remotely intrigues you, take a look. My final verdict for this humble, yet incredibly useful little pdf will be 5 stars.

SGG Presents: A Brace of Pistols is available from: