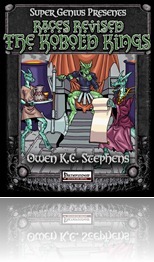 So what are these kobold kings? Essentially, this pdf assumes that there once was a civilization of dragon-worshipping lizardfolk that turned into draconic humanoids and were subsequently, at the height of their empire, wiped out – only the smallest of them managed to escape and developed (or rather, degenerated) into the race now known as kobolds-While, akin to Lizardkings among Lizardfolk, sometimes a throwback is born to regular kobold parents, the Koldemar, as these last remnants of the draconic humanoids are called, might be still breeding true, dreaming their dreams of reclaiming and rebuilding their former empire, powered by their draconic abilities in some remote place of your campaign world.

Their racial traits are +2 to Dex and Cha, -2 to Str, they are reptilian humanoids, small, count as kobolds, have a normal speed, darkvision 60 ft., +2 natural AC and can choose 3 skills as class skills for all of their classes and they get a +2 racial bonus on them. Beyond these crunchy bits, we also get advice on how to introduce the Koldemar as a player-race and, rather cool extensive information on their nomenclature, including a selection of pre- and suffixes including their meanings – very cool and something I wish more racial books would do. (Yeah, I’m a sucker for linguistic peculiarities – think about it: “Valar Morghulis” is a neat contemporary example and oh so sweet…)

Of course, nowadays every race has some alternate racial traits and the Koldemar also get 5 of them: From the ability to better bond with animals to medium dragonfolk Koldemar (with other attribute modifiers) to coloured Koldemar with an affinity for dragons and elemental (and similar) resistances depending on their colouring. Oh, and they can get gliding wings as well as a swim speed of 20 ft. and improved lung-capacity. At least on favoured class option for all core, APG, Um and UC-class is given, often even more, e.g. 3 exclusively for those Koldemar of draconic aspects – summoner can even choose between 3! Fans of SGG can rejoice, for we also get favored class options for Archon, Armiger, Death Knight, Death Mage, Dragonrider, Godlings, Magisters, Mosaic Mages, Shamans, Templars, Time Thieves and Wardens, Vanguards, War Masters and Witch Hunters.

The first of the new Kobold archetypes is called Apocalypse, after the fitting term kobolds use for flights/herds/whatever of dragons and is a fighter archetype that emulates dragons to gain harder scales and even natural claw attacks. The Harasser takes the iconic art of trap creation and makes it possible to use these and create them fast – a total of 13 traps are part of the deal. A total of 13 feats lets you further customize your Koldemar by granting them e.g. improved gliding capabilities, the option to use a wand in their tails, draconic resistances or a minor breath weapon depending on the dragon they descend from (including imperial and primal dragons, btw.), tail slaps and, of course, improved sniping and ambushing prowess. My favourite feat, Rune Scales, lets you duplicate the effects of simple wondrous items that grants a constant bonus on your scales.

We also get new equipment with the tail pouch, clawed gauntlets and the tail buckler as well as the new material elfhide. And yes, it’s exactly what it says on the lid. Gruesome? Probably. But from the Koldemar’s perspective all the people skinning lizards are not better… We also get a new specific magic armour made from elfhide and lesser handy haversack-style pouches that can be worn on one’s tail, which is rather cool.

The pdf also includes an appendix with 6 different koldemar-standees.

Editing and formatting are very good, though not as perfect as I’ve come to expect from SGG. Layout adheres to a 2-column standard and the pdf comes fully bookmarked. The pieces of b/w-artwork are ok, but nothing too awe-inspiring. So, this pdf takes the kobold-race and essentially elevates them by introducing a new sub-breed that is intended as a player-race or even a straight-forward opponent with a noble ancestry in contrast to the cliché of the craven trickster. I’d applaud the concept, but honestly, while the idea per se is nice, I never really warmed with the Koldemar.

Perhaps it’s a remnant of the “slap-a-draconic-ability/template-on-anything-that-moves”-mania of the 3.5-days of old, but for me the charm of kobolds was that they BELIEVE to be descended from dragons and still are as small and physically weak – and they know it. To counteract the shortcomings, they developed a sense of cunning and craftiness that sets them apart, Midgard’s kobolds, which plow away in the mines of Zobeck and create both devious and hilarious traps and clockwork marvels when not on “We not work day” are what epitomizes being a kobold to me.

Koldemar instead felt to me, in spite of the cool naming section and the rock-solid crunch, like yet another reptilian race descendant from dragons with all the abilities you’d expect. Make no mistake, the bases are all covered: Natural attacks? Check. Rudimentary wings? Check. Elemental affinity due to scale-colour? Check. Better scales? Check. None of the pieces of crunch felt bad, unbalanced or faulty. But still, as much as it pains me to say, reading this pdf just bored me. Hard. The nomenclature-section being essentially the only one that somewhat elicited excitement from me. The pdf also lacks an age, height and weight table for Koldemar, which is a downer for a player-race.

Are the Koldemar a valid option to play? Yes. Do they have abilities worth picking? Yes. Do they have racial options to customize? Again, yes. But do they even for one second provoke any sense of wonder, any cool “Hell yeah”-moment from me? No. D o they, even once, reach the vast narrative potential of the “Argonax”-pdf? No. Do they come with a unique society or social structure? No. Ultimately, do I think they can bring something new and exciting to my table? The answer unfortunately is no. When directly compared to similar race-books, in spite of the excellent crunch, the Koldemar don’t feel like an interesting race, but more like a transformation of one of the most iconic monster-races in PFRPG, carefully nurtured by Paizo and Open Design into a unique identity, into yet another representation of the oh-so-tired noble, scaled savage trope.

This pdf did absolutely nothing for me, and personally, I consider it one of the few SGG-books I will never ever use in my campaign – for me as a person, this is a 1-star book. However, if you’re excited by the idea of playing a noble draconic kobold, this might be right up your ally and even a 5-star-pdf. Seeing that reviews reflect opinions and mine will in this case obviously be very different from many other people, I still feel it is my responsibility to acknowledge the solid crafting that went into the crunchy bits and the potential appeal. Thus, my review will fall in the middle, at a solid 3 stars with aforementioned disclaimers.

SGG Presents: Races Revised: The Kobold Kings is available from: