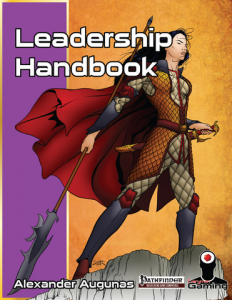 This supplement clocks in at 28 pages, 1 page front cover, 1 page editorial, 1 page SRD, leaving us with 25 pages of content, so let’s take a look!

Okay, so what is this? Well, in one short sentence, this is leadership for everyone. Yeah. You take arguably the most powerful feat in the game and give it to everyone, free of charge. Can this work? After an aptly-written piece of prose, we are introduced to the mechanics – first each character has an LS, a leadership score, which is equal to character level + cha-mod. If a check is called for, roll 1d20 and add your LS plus miscellaneous modifiers as per the table. Mythic characters also add their mythic tier to the LS. Now if you’re like me, you always considered the leadership modifiers provided by the feat to be NOT enough – well, from frequent communication to taking decisive actions, the new misc modification table provides much more diversity.

LS determines cohorts, followers and here’s the awesome thing – use LS to qualify for mass combat boons, special leadership perks and the reputation of the characters. In a cool alternate option, closely entwined parties may sport a kind of party leadership. Now the way in which cohorts are obtained, their maximum level, promotion options and recruitment – all of that is covered in ample detail. Better yet, synergy with mass combat and downtime rules are provided, filling a gaping hole in the regular leadership-rules. And yes, interaction with the kingdom building rules and leadership therein can also be found within these pages. Beyond rules, some great guidelines for building cohorts that are FUN in game are also provided and advancing them (including the advancement of monstrous cohorts) would be another point covered. Advice for DMs handling cohorts and a massive list of sample monstrous cohorts along their bestiary origin can be found within these pages.

Now in a stroke of absolute brilliance, downtime follower recruitment is provided in the book – and the book does not stop there. Training followers as army commanders, as contacts etc. -all covered. Better yet, a concise table provides max ranks for skills of followers, acting as a convenient and elegant balancing mechanism. And yes, training followers as teams would be covered as well. 5 sample followers would be provided herein, so let’s move on to reputation, shall we?

The reputation is tied to a sphere of influence within e.g. a kingdom – only within this sphere, the effects are felt. Increasing the LS also increases the array of hexes you can influence. This can go in both ways, however – you can also gain infamy in certain hexes. Reputation effects utilizing fame/infamy, from discounts to lynch-mobs, provide tangible, concise benefits to the characters and both positive and negative effects are covered in a huge table. But that’s not where this pdf stops – party reputation, secret identities and alter egos with completely different reputations – all covered.

Now if the mentioning of fame wasn’t ample indicator – the system thus also ties in perfectly with the organization-rules, allowing you to spend prestige points granted by your fame for different benefits.

As you advance your level, you also receive so-called leadership perks -one at 2nd level and one at every two levels thereafter. These perks can be used to strengthen armies, cohorts, contacts, downtime, kingdoms, relationships, reputations and titles. There also are loner-perks which provide a stronger benefit, but these exclude you from attracting followers and cohorts. The last 8 pages of this pdf are completely devoted to a vast array of different perks that allow you to make a kingdom into an economical power-house, modify downtime effects…If you for example, would be the beloved heir of the throne, there’s no a perk for that. Same goes for being on personal quests, for being essentially the martial law, for being just devoted and loyal…what about filling two roles in the kingdom? What about being a one-man-army? Yeah, you *can* see that, can’t you? The one wizard/fighter before a whole army, brandishing the weaponry and telling them to come get him? Oh yes. What about creating a group reputation with your spouse? This is absolutely awesome…BUT.

Yeah, there’s a “but” – prepare for my dreaded nitpick-powers!

The “o”s in the perk-header font seem to be a bigger size than the other letters.

Yeah. I know. Not really a weighty point of criticism.

Editing and formatting are very good, I noticed no significant glitches. layout adheres to a gorgeous, yet relatively printer-friendly 2-column full-color standard and the pdf comes fully bookmarked for your convenience. it should also be noted that the pdf sports numerous gorgeous original pieces of full-color artwork.

Ben McFarland once wrote on the Paizo-boards that Leadership would be the greatest gift a player can make the DM – it shows an investment into the campaign, a willingness to engage in mutual worldbuilding beyond the norm. I tend to concur.

With the release of Ultimate Campaign, a certain discrepancy has crept into the most beloved feat at my table (seriously, in my last campaign all but 2 players had it!) – and now, it’s gone. In order to playtest this book, I had to actually integrate it into my main campaign. Just running a module or the like wouldn’t have worked and I have two characters with the feat there anyways, so yeah. We made a bunch of modifications and ran with the system. Synergy with mass combat, downtime, fame and reputation – this system is a perfect example of ridiculously elegant design. Alexander Augunas takes all the distinct systems and ties them together in elegant, awesome ways and offers options upon options.

Okay, I can’t emphasize this enough – this book is a huge blessing, a godsend. It is elegant and smart. It works exceedingly well in actual gameplay. It takes a vast array of disparate systems and forges them into a significantly more cohesive, functional entity. And it fixes the issues created by the relative strength of cohorts that make other characters feel left out. It also sports neat prose and provides advice for using these rules sans bogging down the game/stealing the spotlight. The Leadership Handbook will never, ever be left in any of my campaigns from this day on.

I cannot fail to emphasize this enough: EVERY kingmaker-campaign should get this. Every campaign using Ultimate Campaign as a book, any of its component-subsystems, MUST get this. The systems benefit greatly from the inclusions of this book and the system also perfectly works with Legendary Games’ expansions.

Let me once again make this very, very clear – the Leadership Handbook is a humble, inexpensive, utterly awesome book that renders leadership infinitely more streamlined – less like a half-baked feat-remnant, but like a full-blown tie-in with all systems. This is pretty much what I wished Paizo would do – tie disparate systems together with a concise frame, an awareness for the functionality of them. This is utterly superb. My only regret is that I wanted this to be SO MUCH LONGER.

It is hereby awarded EZG Essential status, becomes a candidate for my Top Ten of 2014 and receives a final verdict of 5 stars + seal of approval.

You can get this awesome, glorious resource here on OBS and here on d20pfsrd.com’s shop!

If you like Alexander Augunas’ designs, you may want to check out the Pact Magic Unbound: Grimoire of Lost Souls-Kickatsrter here – why? Because you can get a subscription for 2015 for a very low add-on-price!