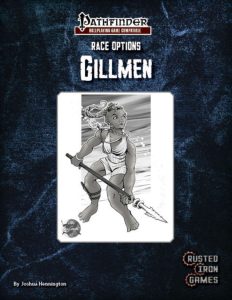 This review was move up in my reviewing queue at the request of my patreon supporters.

We begin with a recap of the gillmen’s heritage and the pdf also includes the racial traits of the species. We get three alternate racial traits: One replaces being amphibious with 3/day charm person (not properly italicized) as a SP; alternatively, they can reduce land speed to 10 ft., but get 50 ft. swim speed. Interesting: There is a trait that nets you fast healing of 1 hit point per minute, but at a serious cost – you can only ever spend 3 hours outside of water before death from organ failure, escalating the water dependent trait. The supplement also features an array of favored class options for alchemist, arcanist, barbarian, bloodrager (aberrant bloodline), druid, kineticist, occultist, paladin, psychic, ranger, sorcerer (aberrant bloodline), vigilante and witch. All in all, these check out – they are potent, but not unduly so – relevant options to have.

The pdf contains 4 new feats: Aboleth’s Pawn increases enchantment resistance to +4, and the penalty vs. such effects from Aboleth sources to -4. You also are treated as having Skill Focus Knowledge (dungeoneering) for meeting the prerequisites of the Eldritch Heritage (aberrant) feats or other feats with it as a prerequisite. Water-retentive Skin nets you a longer deadline before requiring immersion in water – kudos: No this may not be used to cheese the potent fast healing alternate racial trait. Remembered Legacy lets you count as human and nets you the human subtype. There is an issue here – what if an effect would benefit gillmen, but penalize humans? This should specify how such cases work. Communal Mind-Gridding is a teamwork feat nets you +1 to saves vs. mind-.affecting effects for every ally with this feat within 30 ft., maximum +4.

The pdf contains 2 archetypes, with the first being the sea sentinel cleric, who is locked into the oceans subdomain, and does not get a second domain. The save DC of spells with the water descriptor increase by 1, and the archetype gets +1 to atk rolls of spells or abilities with the water descriptor, including explicitly the surge domain ability. The bonus increases by +1 at 10th and 20th level. The archetype can heal any aquatic or water subtype creatures, or command them with channel energy, as though per the Command Undead feat. 4th level gets rid of underwater combat penalties, including a limited range where ranged attacks take no penalty – the range of the latter ability increases. 7th level nets an animal companion as a druid at -3 levels, but the companion needs to be aquatic/water subtype. Essentially, a shepherd of the waves style archetype.

The second archetype is more extensive – the ephemeral visionary medium replaces the default spirits with 3 destinies – history, nonce and fate; these otherwise behave as though they were spirits. The spirit bonus of history applies to Charisma checks and Charisma-based skill checks as well as Fortitude saves, and the Séance boon nets +2 to attacks with non-spell attacks. Influence penalty applies to Dexterity-related checks and Reflex saves, and the taboos including refusing aid or harmless spells, an inability to let insults stand, or demanding half the treasure. The lesser ability nets martial weapon proficiency and Weapon Focus with said weapon. Intermediate nets you a teamwork feat that you may share with all allies within 30 ft. temporarily as a standard action, and it may be used again when accepting influence. The greater ability further enhances the weapon skill with the weapon chosen via the lesser ability, and the supreme ability nets a hefty +6 to all physical ability scores, which can be triggered as a swift action – essentially, this one acts as a warrior-suite.

Nonce applies the spirit bonus to Wisdom checks and Wisdom-based skill checks, as well as, oddly, reflex save. Expected to see Will there, but I assume intention here, since Fate applies the bonus to Will. The séance boon nets you swim speed. Influence penalty sees you paranoid that the aboleth masters will get you, preventing aid another and imposing spirit bonus as a penalty to Charisma-based checks and skill checks. Taboos include slaying all aberrations on sight, not leaving the water for more than an hour or sell at least 1/3 of what you find. The spirit abilities include seeing in water and create water as a 0-level spell (should be called knack); intermediate nets you favored terrain +2 as though a ranger, +4 if you choose water, and hydraulic push as a first level medium spell. The greater ability nets ranged disarm or steal under water a limited amount of times (accept influence for more uses) and slipstream as a 2nd-level spell. The supreme ability nets you the option to generate 5 supercharged geysers that also gate in summon monster VII water elementals every few rounds. OUCH! It also adds quench and geyser as medium spells.

The Fate option applies the spirit bonus to Intelligence checks, Intelligence-based skill checks and Will-saves, and. The séance boon nets a +1 to the DC of enchantment and illusion spells, and the influence penalty prevents you from casting beneficial spells on allies, unless you’re included among the targets or area of effect. Taboos include autofailing Will saves unless they directly harm others or result in directly harming others; communicating exclusively in Aboleth, or being forced to execute vanquished enemies. The lesser ability is using the mesmerist’s spell per day table (NOT the spell list!); for each spell level you get, you also choose a psychic spell to add to the medium spell list. The intermediate ability nets you a 15 ft.-reach tentacle with 1d4 base damage, a primary natural attack. You have to default regarding damage type. It can deliver touch spells. The greater ability lets you expend spell slots to make a ranged attack against a target in close range; targets hit take a penalty vs. your mind-affecting effects, with the penalty determined by the spell slot used. As usual, limited uses, accept influence for more uses. The supreme ability nets you a potent dominate monster  SP.

The archetype also replaces location channel mirrors trance of three for other destinies, except the character gains the lesser spirit power, and the ability does some surprisingly interesting modifications, and as a big kudos, the fate destiny’s bonus spells become a separate, distinct array, but can’t be cheesed. Well, this is a cool class-hack. I’d particularly consider this one for 1-on-1-games; It’s versatile and interesting.

The pdf also contains two psychic options: The corrupting slime phrenic amplification, which can lace aboleth slime in linked spells (managing to execute some high-complexity rules-operations rather well), and also add Constitution damage to spell effects; and yes, balanced. Kudos! The major amplification, sleeper agency, can add an implanted suggestion (not properly italicized) in those affected by charm effects. This ALSO is forgotten. Wow. This may not sound like that much, but it can be used to super-devious ends. Like it!

The pdf also features 3 spells: Symbol of mental erosion works like a symbol of death (bingo, not in itaclis), save that it imposes a massive debuff versus mind-affecting effects; deep-sea armaments is a low-level spell that makes your weapon count as piercing for purposes of attack rolls and damage under water, but NOT any other way; kudos: The spell does explicitly state that damage type etc. remains unchanged. This is a really handy rules-hole fix. Underwater suffication[sic!] is funny, in that, while the title has a typo, it gets the formatting of spell-references right. This spell suspends the ability to breathe underwater, and the spell also has a chance of dispelling underwater breathing spells.

Editing is good on a formal level, very good on a rules-language level; same goes for formatting – the pdf may have some typos and cosmetic guffaws, but it gets often complex rules-operations done right. Layout adheres to Rusted Iron Games’ two-column full-color standard, and the pdf has a couple of solid b/w-artworks. The pdf, in spite of its brevity, comes fully bookmarked. Kudos!

Joshua Hennington’s humble little pdf surprised me in a positive manner. While there are a couple of options herein that I’d consider to be filler, the pdf’s occult options in particular are interesting and well-crafted; surprisingly, it’s not the class hack that I most liked, but the psychic options – they look simple, but are pretty tough cookies to properly pen. Anyhow, this is a solid little supplement, with a few lame things (the feats are imho superfluous at best), but also some gems – all in all, well worth 3.5 stars, rounded up due to the low and fair price and the well-wrought occult material.

If you like my reviews, please consider leaving a donation or joining my patreon here!