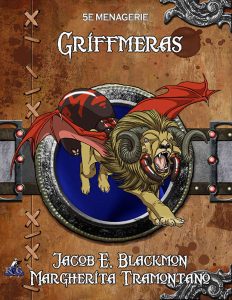 This monster menagerie happened in a curious way: Owen K.C. Stephens posted brief descriptions on social media; Jacob Blackmon started illustrating them and stating them for 5e – and then, Margherita Tramontano joined the fray and crafted Pathfinder iterations – there we go – the pdf is 27 pages, 1 page front cover, 1 page editorial, 1 page SRD, 1 page advertisement, leaving us with 23 pages of content, so let’s take a look!

The critters herein all have full-color artworks, depicted on their own page, which makes them suitable for handouts – a big plus, as far as I’m concerned. It should be noted that the formatting of the respective creatures within is pretty good, with only the header of the respective creature abilities deviating from standards – they are only bolded, not both bolded and in italics. Now, as for the critters within, what do you get?

Well, we start with the Ahemset, which would be a massive viper with a crocodile head. It clocks in at challenge 3 and can constrict targets, which is nasty, courtesy of its razor scales. The bite carries poison, and the gaze of these beings can charm those meeting it. Nice one. Also at challenge 3, the Criocore is a ram-headed lion with spider-aspects (cool!) – it gets a proper charge attack that may knock targets prone, has acidic webs, etc. – really cool! Like it!

While we’re talking about challenge 3 critters: A Guldami is a wolf/scorpion-hybrid and conceptually pretty cool, with pack tactics and the option to execute attacks with wolf maw and stinger. Karnnoloups, at the same challenge, are antlered wolves that may assume humanoid form during the winter months. It also has quite an array of cold-themed innate spells.  The final challenge 3 critter is the serpohipp, a horse body with a large cobra protruding from the neck – it’s, unsurprisingly, poisonous and gets a neat trampling assault.

The challenge 9 Cerbearus is a puntastic Large celestial with multiple heads and cool innate spellcasting tricks. The creature works much better in the 5e-iteration.

At challenge 2, the ulvarg is a Large wolf with a human head and mouth. Cool: It has an intrinsic knowledge of when the word “ulvarg” is uttered, may turn invisible and ahs a couple of cool trick. The 5e-version is vastly superior to the PFRPG-iteration.

The challenge 5 dracopotamus is surprisingly Stealthy (getting twice its proficiency bonus to Dexterity (Stealth) and trampling charges; it can also make a vortex that takes water vehicles etc. into account. With steam breath, we have a pretty cool critter in 5e!

At challenge 8, I love the look of the grunthumplema – basically the front-body of a bear, supported with orca tail and head as well as a walrus head – capable of swimming through ice, with freezing blood, this is a “cool” (haha) critter – I particularly like how the freezing blood in the 5e-version actually differentiates between where you’re affected by it, and that you may end up petrified! Minor nitpick – there are a couple of blank spaces missing in “KeenHearingandSmell.”

Lykopards, are challenge 1/4 panther/jackal hybrids with caustic blood – oh, and they are evil. Their blood ruins weapons fast, and they can mimic sounds and human voices. They also have pack tactics and pounce.

Really cool conceptually: Picture a colossal hybrid of a sperm whale and a massive crab at challenge 19, the lyngbakr is just that – it’s a pretty brutal, if very straightforward combatant. Unfortunately, its defenses are super-sucky for the challenge – no condition or damage immunities, and no proficient saving throws. With low Int and Cha, these ask to be pummeled hard.

On the other end of the CR-spectrum, at challenge 0, the sektaf is something I’d genuinely take as a pet: Picture a spider with a cat’s head – including many cat-eyes. The artwork is pretty cute, and the critter comes with the option to share its web sense while close to its master – greatly appreciated!

Editing on a formal and rules language level is pretty good; formatting sports a couple of minor snafus, but can still be considered to be good.. Layout adheres to the series’ two-column full-column standard, and the pdf comes with pretty cool full-color artworks. The pdf comes fully bookmarked for your convenience.

It is obvious that this supplement was penned primarily with 5e in mind, and it is vastly superior in this version; Jacob Blackmon and Margherita Tramontano do a vastly superior job in this iteration. The creatures are unique, the 5e-rules are implemented in a concise manner, and while a few aesthetic niggles in verbiage exist, they don’t impede gameplay, rendering this a fun file in its 5e-iteration. There are a couple of critters that are a bit “safe” designwise, as in they don’t do that much interesting stuff, and the challenge 19 creature is vastly over-inflated in its actual challenge, but as a whole, this is a cool little supplement. My final verdict for this version will be 4.5 stars, rounded down.

You can get this nice little bestiary here on OBS!

Enjoying my reviews? please consider a donation, or joining my patreon. Thank you.