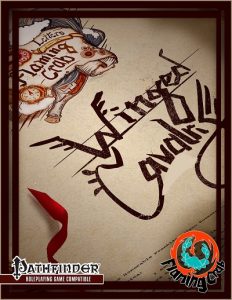 The first of the installments of Flaming Crab Games’ series of experimental pdfs clocks in at 13 pages, 1 page front cover, 1 page editorial, 2 pages of SRD, leaving us with 9 pages of content, so let’s take a look!

We begin this pdf with a well-written letter sent by Molly Shell, captain of the UCs Flaming Crab, which, thanks to the cooperation of Einstein and Tesla, has obviously managed to transcend the borders of an alotopia of our world – and ended up in a storm, which brought it to J Gray’s house…

Flavor-wise, we begin well here. The pdf begins with the Wind Warden, a class that gets full BAB-progression, good Fort-saves, d10, 4+Int skills per level, proficiency with simple and martial weapons and all armors and shields (excluding tower shields). At 1st level, they get Challenge (+1/day at 4th level and every 3 levels thereafter) and they gain a mount animal companion at full druid level., with light armor proficiency, but sans share spells. Similarly, at 1st level, the wind warden chooses an order. Now where things become interesting is with Winged cavalry – which explicitly states that a mount may now fly in medium armor and it may carry the warden, even if it usually wouldn’t be able to, provided it has fly speed – so yes, the two most commonly stumbled over pits in the basic assisted flying rules are addressed – kudos. Instead of Ride-bonuses, we get Fly-bonuses and 1st, 9th and 17th level, the mount receives a bonus feat. Better charging, 1/2 class level to Ride and better attacks versus flying targets are solid. 6th level and every 6th level provide a teamwork feat to warden and mount. All in all, a solid cavalier variant for aerial combat!

The pdf goes on to present a total of 5 orders, all particularly suited for the wind warden – the first one would be the order of the feather, mostly known for the pegasus mounts. Their challenge allows the knight to still perceive the target in darkness, blur and similar trickery, negating concealment thus granted- unique! 2nd level provides an ability for heroes: Nonlethal damage sans penalty and targets of challenges thus damages must save or be shaken. Damn cool and distinct. 8th level provides constant at-will SP detect evil that also allows the warden to increase damage versus targets confirmed as evil a limited amount of times per day…cool, though I *think* the ability should be SP as the text says, not SU (as the ability header) for spell-level and magic interaction purposes. If the target is detected as evil, high level wardens may basically get a kind of pseudo-smiting benefit: + Cha-mod to atk, with increased potency versus evil outsiders and the other usual suspects.

The order of the spire grants allies scaling deflection bonuses to AC when issuing a challenge and gets less distance penalties to Perception as well as a 1/hour speed burst. 8th level provides bonus precision damage that scales when charging foes from above (or astride the mount) and finally, the order grants an increasing luck bonus to rider and mount. Speaking of which: Know what’s awesome here? THE MOUNT. You see, these guys ride magic carpets. CR 3 construct stats provided,a s well as the mount-stats. Awesome.

The order of the sting can apply challenge bonus to melee and ranged attacks, gets poison use, at 8th level sneak attack at 1/2 level and at high levels, a victim to the warden’s poison (or that of the mount) is considered flat-footed against the warden – ouch! These guys ride giant wasps, btw..

The order of talon and mane provides scaling bonuses to atk and saves versus fear to nearby allies and gains Bodyguard – however, here’s the interesting thing: Using this feat extends the duration of the bonus granted to allies by 1 round. Cool idea! Similarly, In Harm’s Way is granted and may double the bonus granted to allies and at high levels, the mount gets unlimited access to Mighty Charge and Wind Warden’s Charge. These guys ride griffons.

This is not where the pdf ends, though: The final page of this book provides a VERY useful Fly/Ride-cheat-sheet, including sudden dies, barrel rolls, etc. and a variant suggestion to consolidate Fly and Ride.

Editing and formatting are very good, I noticed no significant issues. Layout adheres to Flaming Crab Games’ two-column full-column standard and the pdf sports a great full-color artwork and a no less awesome b/w-piece. The pdf comes fully bookmarked and sports a second, printer-friendly version.

J Gray’s take on Winged Cavalry is concise and well-written – the variant aerial cavalier, while not too unique on its own, streamlines the crucial issues for first level assisted flight – kudos for being one of the few designers who get that right. The orders themselves all sport awesome mounts and these alone may be well worth the asking price. For the most part, the respective orders are also creative and feature some nice ideas, with pegasus and spire being the most interesting, at least to me.

So is this good? Well, if you’re planning to run a campaign sporting a lot of assisted flight/aerial combat, there is still no way past the superb “Companions of the Firmament“-tome, which I suggest just about everyone to get. HOWEVER, if you want an inexpensive, fun take on the aerial knight…then this will certainly do it and it actually can be used to complement CotF! All in all, this is a very promising start for the series, with me arriving at a final verdict of 4 stars for a good little pdf.

You can get this nice little pdf here on OBS and here on d20pfsrd.com’s shop!