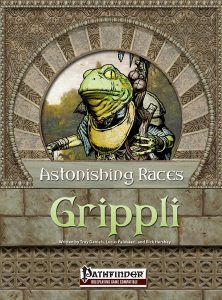 This review was moved up in my review-queue due to me receiving a print copy.

Ah, Grippli…I have a soft spot for the race. If you never got how awesome they can be – take a look at user NobodysHome’s Serpent Skull-campaign journal on the Paizo boards. But beyond the hilarity and genius of said campaign, grippli as a race are interesting: Kinda cute, a bit naive and good frog-people? I don’t have to look into the cute froggy eyes to get a kind of warm-hearted Kermit flash-back…but Gripplis are no joke and under-developed. The race has a LOT going for it, but so far, there is not extensive or particularly interesting supplement detailing them out there.

Well, this book seeks to remedy just that. Why is this important? Well, you know that I can be pretty harsh on races – for a reason. Just tacking together a couple of stats is not enough in my book; I want to see information about a given culture, the psychology of the people, the customs – otherwise you’re just playing an oddly disfigured human, not a unique race. Suffice to say, the book delivers in that regard. Grippli culture(s) and village types, including desert grippli (yep, these exist – the book notes several subtypes with recommended racial traits) and their lifestyles are depicted. Tribal and somewhat matriarchal grippli definitely make sense to me, as do superstitions pertaining certain creatures and enmities. Rules-wise, age, height and weight tables and the racial stats for the grippli are provided – the latter with an RP-breakdown as per the ARG.

Usually, the presence of the like does not bode well, but here, it is justified: Grippli as a race are not particularly strong and function in every type of campaign, even the lowest, grittiest ones. However, and the book is aware of that, they actually are arguably slightly below standard races in potency. Hence, a suggestion is presented: Among the various alternate racial traits provided for the grippli, one can optionally choose to bring them up to core-race level. Granted, their climb speed is powerful, but overall, I’d suggest you heed this recommendation unless you plan to run a rather low-powered campaign. The process, obviously, is only possible due to each alternate racial trait sporting an RP-value alongside the traditional “replaces x”-line – and as much as the RP-values usually suck at determining a balanced race, the alternate racial traits here, from poison skin to gliding membranes to reduce falling damage and obvious one like deep breath, overall manage to provide a great customization frame-work for the race. And yes, Diplomacy bonuses via the “Princely” trait got a chuckle out of me.

The book manages to score on par with the most detailed of racial supplements in one regard as well: Favored Class Options. Beyond the races we all expect, Advanced Class Guide and Occult Adventures are covered – sometimes interacting with e.g. certain deeds or blessings. They are overall well-crafted…and do something I very much welcome: They comment on how the average grippli psychology and social norms interact with them – a lingering sense of guilt for intrusions in one’s mind for mesmerists, psychics in tune with the very swamps they inhabit – this brief pieces of fluff made the usually rather tedious process of reading FCOs rather enjoyable and can provide roleplaying pointers I very much welcome.

Archetype-wise, we get three new options: Bogborn alchemists replace throw anything with mutagens that grant 15 ft. swim speed and may take toxic skin as a discovery. Three new grippli discoveries complement it: Chameleon grippli can enhance their skin to grant +4 to Stealth ( +8 at 10th level), while those with deadly excretions change their toxic skin’s poison’s effects from Dex to Con. Okay, if not too exciting. The third discovery has a different formatting, with name in italics as opposed to the two bolded discoveries before that – consistency would have been nice here…however, the discovery itself is pretty awesome, allowing you to throw bombs underwater and providing brief, concise rules for throwing bombs at targets below the surface.

Atop buzzing wings, the dragonfly champion does not gain proficiency with heavy armor and gainsan improved tactician that grants teamwork feats for 4 + 1/2 character level rounds. They also get a dragonfly mount and replaces the cavalier’s charge ability-tree for scaling, devastating charges when jumping from the saddle of his dragonfly mount, emphasizing a more fluid and agile attack style. And yes, the vermin becomes intelligent – rudimentarily so, but nice catch. The order of the dragonfly receives bonuses when defending at least one member of his tribe when in challenge and adds Acrobatics and Fly to his class skills and adds Cha to the DC to intimidate him. The order abilities per se look interesting: At 2nd level, he can “rally a single member of the tribe with great confidence and ability. The tribe member gains +4 to attack, damage and save rolls and temporary hit points equal to half the cavaliers total as the cavalier rushes to their aid. this lasts for one round.” *sigh* I kid you not, that’s the text. Okay, it’s supposed to say “The tribe member gains a +4 BONUS (also add bonus type)..:” and the rushed to their aid is confusing. Is there a limit? Considering the power-level of the ability, I’d assume so, but I have ultimately no idea. Oh, and yes, the activation action is missing. I *assume* aid another, but that would require serious fixing as well – as provided, the ability is simply non-functional. The higher level abilities work, though flawed punctuation makes them a bit harder to grasp than they should be.

The final archetype would be the exterminator ranger, who gets a sewer-modified skill list and may prepare poisons in specific ways to affect aberrations, vermin and oozes if they’re part of his favored enemy array. Overall, while not perfect, this guy is okay.

The new equipment options provided herein are more solid – beyond a variant tanglefoot bomb, we can find ceremonial drums, grippli war paint and a grease-duplicating powder and glowmold lanterns – the items generally are well-crafted, though e.g. lower-case references to attributes made me cringe in the formal department. Bone as material is discussed here as well, considering how many of the grippli’s items use it.

Monster-wise, stats for giant dragonflies (CR 4) and their nymphs (Cr 3) are provided…but annoyingly, the dragonfly mounts lack proper mount stats – yep, no starting statistics, no advancement. That’s pretty much as glaring of an oversight as any, unfortunately…and it means that the mount assumed by the cavalier archetype…doesn’t work as intended.

The feats contained herein are okay, though ultimately nothing to write home about.

The 4 traits depicted do work, though they do sport minor, aesthetic hiccups – penalties, for example, have usually no type. Thankfully, the pdf returns to form with the magic items provided: E.g. bubbles that can hold equipment and be commanded to sink to the bottom of the marsh and dig themselves in? AWESOME idea. The new spells are interesting as well and provide an example where I consider energy-substitution-type spells actually cool: Swamp Fire basically works like call lightning with fire may not win any prizes regarding innovation, but the flavor and visuals make this variant work.

The pdf does end on a high-note, though: A massive table of 50 entries provides random grippli features – from humming tunes to being okay with burping and farting (sounds a bit like your native tongue), these quirks are endearing and fun, providing some nice roleplaying ideas for players and GMs alike.

Editing and formatting…are still okay, but in some parts seriously flawed; the weird thing about this pdf being ultimately that it oscillates between very clear passages…and some that sport formal editing glitches and significant problems in the rules-language. Layout adheres to a beautiful 2-column full-color standard and the pdf sports numerous gorgeous full-color artworks. The dragonfly-riding grippli in particular is neat indeed. The pdf comes fully bookmarked for your convenience and the print edition has a nice cover and quality paper. The colors are vibrant and the book itself does look really nice.

Rick Hershey, Lucus Palosaari, Troy E. Daniels have crafted a book that leaves me ambiguous – I actually REALLY want to like the grippli presented herein – and I do. The fluff is impressive, particularly considering the need to be campaign-setting-agnostic and the pdf does excel here. However, the different authors do show – from solid rules-language and well-written prose, we go to sections that suddenly read a bit less compelling and sport glaring oversights. The cavalier options are non-functional as presented and represent the most glaring rules-issue herein – generally, the rules-language, while deviating from the standard, at least remains clear enough to work sans ambiguity. There are whole sections that lack issues like this. Basically, the components pertaining the race and its options can be considered nice, while those beyond…are often problematic.

This is frustrating for me – I want to like and recommend this book and it does have a lot to offer; the sheer fact that it provides depth for the grippli-race and the nice logical tidbits regarding culture and racial peculiarities made this more fun to read than many similar race books I’ve reviewed. At the same time, though, the supplemental crunch and rules-language would have required a more thorough editing/development to be interesting – from the lackluster feats to aforementioned cavalier-option (which is cool, but doesn’t work), I wished this material has seen a bit more polish to bring it up on par with the quality of racial tricks and FCOs. Whether you’ll enjoy this book very much depends on what you’re looking for – if you look for ROLEplaying-options and don’t mind the rather less than stellar editing, this may score as high as 4 stars for you; if you look for crunch and precise language, though, then this will not exceed 2.5 stars for you. My final verdict will clock in between these, at 3 stars.

You can get this inspired, if not perfect racial supplement here on OBS and here on d20pfsrd.com’s shop!