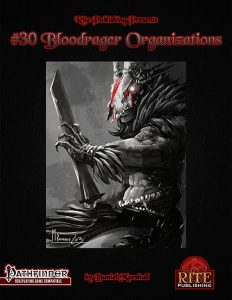 This unusually massive installment of Rite Publishing’s #30-series clocks in at 62 (!!!) pages, 1 page front cover, 1 page editorial, 1 page SRD, 2 pages of advertisement, which leaves us with 57 pages of content, so let’s take a look!

So, what do we get herein? Well, basically, a significant collection of organizations for bloodragers, but NOT, and that is important, a full-blown faction-style break-down for them. So no, if you’re looking for fame, prestige, etc.-mechanics, you won’t find those here. Instead, each organization begins with a pretty well-written piece of in-character prose and then sports the alignment of the organization. The tenets are briefly explained and the organizations entry-requirements as well – these usually amount to race, class feature and/or alignment. The leadership of the respective organization is summed up in brief fluff-only entries.

The respective organizations also feature character options, which mostly boil down to alternate class features and exclusive feats. So that’s it structure-wise. Concept-wise, we have a rather intriguing array of organizations – the first would, for example, be the Alcaréd Cyrethion, the vengeance of the fallen – a cadre of elven bloodragers exiled from their homelands for the dangers their volatile emotions supposedly pose. The chaotic good organization was not happy and this is reflected in their promise of vengeance and hatred for their erstwhile kin – this may just be me, but nothing about the write up says “good” – vengeance, promise of slaughter, hatred class features…looks more neutral or evil to me, but oh well. This organization specializes in killing elves, half-elves and fey and receives +1 to atk and damage versus them instead of uncanny dodge. Similarly, instead of improved uncanny dodge, they get scaling SR (5+level; +6 versus elven, half-elven and fey magic) and the exclusive feat adds +1d6 bonus damage (!!!) when using bows, longswords or rapiers versus these folks. The feat imho overshoots the target.

A good cadre of lycanthrope hunters is next and instead of uncanny dodge and improved uncanny dodge, they can alter their weapon’s material to alchemical silver for 1d4 rounds, usable 1+Cha-mod times per day. This scales up to mithral at 5th level. Problem here: As what action? What kind of ability type is this? No idea. Ex? Su? So…regarding mithral…what kind of lycanthrope is susceptible to it again? I couldn’t name one from the top of my head and the usual benefit is that it’s lighter. They count as silver, sure, but where’s the benefit in the upgrade? I don’t see it.

I was positively surprised to see an anti-bloodrager/sorceror-cadre herein…though their feat is odd: “If you fail a save vs. a spell, spell-like ability, or supernatural ability wielded by a creature with a bloodline class feature, you immediately roll again at the same DC. You get only this one extra chance to succeed this saving throw.” Okay, so does this mean I can’t stack a reroll from another source on this one? Or does that mean that you get only one reroll per spell/ability? Per creature? I have no idea.

There is an interesting organization of drunkards that would make Cayden proud – their schtick boils down to being able to drink alcohol to gain temporary ht points, up to their maximum hit points, with each drink providing 1d4 temporary hit points. The problem is that standard actions make this completely unviable and a VERY bad idea. Oh, and 1 + 2xCon-mod, then you’re sickened. At 5th level, these guys also add +1 Str per drink consumed, which looks more interesting…but really isn’t. You see, the Str-increase is a MORALE bonus…which doesn’t stack…and guess what ´the bonus type for bloodrage is? Bingo. Morale. This means a bloodrager has to waste 5 (!!!) rounds of his bloodrage worth of standard actions to get even a modicum of benefits out of this one.

Bloodragers sworn to service of aboleths, celestial champions whose wings gained at 5th level lack maneuverability-information to abilities that inflict “-2 divine penalty” (There is no such thing…) to a shadow-themed bloodrager bloodline or fire fanatics – concept-wise, this does have a broad diversity.

However, the crunch…oioioi. Generally a cool idea: Blood of the Flame, a feat that lets the fire fanatic control creatures with the fire-descriptor as though they were undead subject to control undead. (The spell.) All right, I’ll play: How long does it last? “New saving throw each day” deviates from the spell’s duration. Is this an SP or another ability type? Does it have a CL? No idea. Doesn’t work as written, though it at least gets the HD-cap right.

Another organization allows the character to add a regular attack to a bull rush or overrun maneuver – okay, does this attack benefit from the charge? I assume so. Does it happen at the same time of the maneuver? Since both have a decent chance of moving the target (or the initiator of the maneuver) beyond reach? Another organization provides means to decrease cold resistance – which per se is nice. However, treating immunity as = resistance 30 for means of counting down does not conform to value-assignments. Now granted, not all options herein are problematic – but so far I’ve covered quite a bit.

The thing is…balance is kinda all over the place: From exceedingly weak minor skill-buffs to pretty much OP options, there is everything. Let’s take the Chain the Gifted-feat, shall we – as a swift action, you can expend 4 rounds of bloodrage to execute a touch attack and name one class feature or universal monster ability. The target gets a level-based scaling save. If it botches…the ability is locked by a permanent curse. Sure, saving renders you immune for 24 hours, but this is still save-or-suck and can open a whole can of issues. Don’t believe me? All right: Oracle’s Curse. Channel Energy. Spellcombat. (Does Improved Spell Combat still work?) Breath Weapon…etc. This is VERY strong and worse, it opens a huge amount of ambiguities in the system. This is available at 7th level. This is not getting near my players anytime soon – though I may use it as a monster-exclusive feat. And yes, this is pretty much as good as this book gets, unfortunately: More often than not, you’ll have filler feats à la +2 to saves vs. mind-affecting; +2 to DC to intimidate you.” Yeah, seen that before – approximately 10K times.

And honestly, this really galls me, for this pdf does have something going for it – there are quite frankly some write-ups that are plain awesome: There is an organization that consists of necromancers and priests seeking stillborn children to revive and train them as their own elite cadre, the stillborn walkers – undead or restless souls, one and all. Is that awesome? FUCK yeah. Oh, and they have a good feat – much like the afore-mentioned one, it adheres to the same formula, but instead doubles damage inflicted by piercing and slashing weapons…which is very powerful, but also doesn’t work versus several potent creature types, rendering it more circumstantial…but still one I’d keep from player hands…

At this point, you have a pretty good impression of this pdf as a whole, so instead of boring you with piece by piece picking apart of all contents, let’s jump to the…

Editing and formatting are pretty good on a formal level – there aren’t many glaring punctuation glitches or the like in here and the book reads pretty smoothly. Layout adheres to Rite Publishing’s two-column full-color standard and the pdf comes fully bookmarked for your convenience. The book sports a huge array of beautiful artworks of different styles, some of which I’ve seen before, though most are new to me. This is a beautiful book.

This installment of the #30-series was an exercise in frustration for me. Daniel Marshall knows how to write evocative concepts and has some glorious ideas herein – several of the organizations (though not all) are very intriguing and unique…as far as the fluff and the idea behind the crunch is concerned. Unfortunately, on the rules-side, this is highly problematic. While one can usually glean what the abilities and options were supposed to do, concept-wise, their execution…is as off as can be in some cases, slightly problematic in others. Beyond the balance-concerns and huge gap of power between options for different organizations, a significant amount of the crunch herein…simply doesn’t work as written.

Which is a huge pity. I do consider the ideas herein worthwhile and there are some gems to be unearthed…but ultimately, this just isn’t up to the standard we usually get from Rite Publishing. As an idea-mine, this can work for you thanks to the low price-point. The fluff is pretty nice…but the crunch isn’t. At all. My final verdict will clock in at 2 stars.

You can get this book here on OBS and here on d20pfsrd.com’s shop!