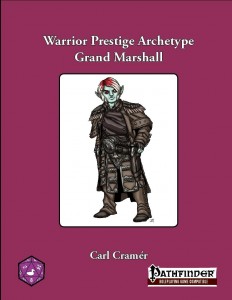 So, the grand marshal is based on the shield marshal, according to the pdf – which isn’t true – that ought to be the Grand Marshal PrC, unless I’m mistaken. The PA receives full BAB-progression, 4+Int skills per level, receive proficiency with all simple and martial weapons and firearms and light armors, d10 and, in an interesting choice, receive good will- and ref-saves. Grand marshals receive deeds and grit akin to the gunslinger (though in an odd choice, gunslinger’s dodge is renamed, while Slinger’s luck isn’t renamed) and also receive gunsmithing at first level. 2nd level marshals may add their int-bonus to wis-based skills (NOT a fan of double attributes on anything -will always be badly min-maxed) and become harder to fool by Disguise or Sleight of Hand.

The class becomes interesting at 4th level, when it gains legal judgment – but alas, here a glitch has crept in – where the original PrC’s reference to class level regarding the DR granted by bulletproof has crept in, the PA’s ability contradicts itself due to not fixing the reference – as written, the PA should receive DR 2/- (1/2 class level), not DR 1/- at the level this ability is gained. This glitch also extends to the justice ability-use. The legal judgment ability can be used 1/day, +1/every 3 levels beyond first – which makes no sense – that ought to be 4th level, right? At 14th level, 2 such judgments can be in effect at a given time.

Bonuses to initiative and at 6th level, an area of responsibility, where the social skills are enhanced by the Marshal’s reputation – slightly unfortunate, though, that no concise size-advice beyond “it depends” for the territory is provided. At 8th level, faster door opening/no movement penalties in urban environments are pretty cool…but where is the alternate ability for more wilderness-based marshals? Same goes for the lack of choice in gaining favored terrain (urban) at 9th level. Better stealth and crowd navigation also maintain a pretty much urban focus. At 18th level, quarry comes pretty late. The capstone can provide a non-magical discern lies – which lacks italicization. It also remains opaque regarding the action required to initiate it.

The pdf comes with favored class option for the core-races only this time around and closes with a blood gnome sample NPC at 1st, 5th, 10th and 15th level. As a nice bonus, we receive two gun-enhancing magical bracers.

Carl Cramér’s Grand Marshal was a PA I was particularly keen on – why? Because I’m a huge fan of the grit/risk-reward-ratio of the gunslinger, but am not a fan of the actual playing experience of the gunslinger class – 0 choice and x issues. But I’m going to ignore my own convictions regarding the class and just take into account, what we have – an okay PrC, translated into a PA.

The original PrC receives pretty disparate elements regarding its capabilities. I really hoped that this PA would provide proper judgment/synergy benefits, perhaps receive some additional, new tricks. Alas, that did not happen. Unfortunately, the PA also suffers from some avoidable, obvious cut-copy-paste glitches that should have been caught, causing confusion with the scaling of the abilities granted. Add to that the high-level focus on urban tricks, which feels somewhat disjointed from the general and more broadly applicable fluff and crunch of the low levels and we have, what feels like a pretty rushed prestige archetype that falls woefully short of its own potential. My final verdict will hence clock in at 2.5 stars, rounded down to 2 for the purpose of this platform.

You can get this Warrior Prestige Archetype here on OBS!