EZG reviews Bosun’s Booty: Extras for Journeys to the West

Bosun’s Booty: Extras for Journeys to the West 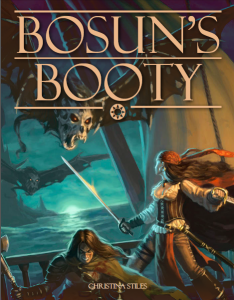 This expansion for Journeys to the West clocks in at 37 pages, 1 page front cover, 1 page editorial, 1 page introduction/patron-list, 1 page SRD, leaving us with 33 pages of content, so let’s take a look, shall we?

The first new piece of content would be the island Astiharha – shaped like an eye, with the portal of shadow in the middle, this exotic locale not only sports quarreling (shadow) fey, but also e.g. elemental creatures, a castle of sand that is modified daily and a truly odd bazaar – complete with settlement statblock. We also are introduced to the benevolent pixie rogue and his malevolent boogeyman foil, a powerful nymph druid and even a shaitan fighter – solid, nice statblocks to supplement this weird, cool place. Have I mentioned the direct shadow road to Zobeck located here? If I may – some of Rite Publishing’s great “Faces of the Tarnished Souk” might also make for great additions to the weird peddling that is going on here.

Next up would be Cystoseira, the Green Wheel of the West, where the fey-demigoddess Thetis lies imprisoned below Sargassum fields that are in constant flux. Floating villages, an aquatic jungle, a village crafted from a plethora of wrecks while sea-knights riding hippocampi secure the perimeters above and below the waters of another of the three detailed settlements there. The cobweb castle that houses Thetis comes with a nice sample CR 5 trap – and yes, a shambling mound oracle also ranks among the inhabitants of this place. Have I mentioned the diving bell spiders that not only are intelligent, but can also be made to share their air supply for perhaps one of the coolest ways to travel beneath the waves I’ve seen in quite some time.

We also get a shorter primer on the island of King’s Rest -essentially a fantastical holiday resort for the rich and powerful. And yes, I love this idea – just take a look at earlier times: Holidays and vacation, while much less common in earlier days, are no new invention and it is more than conceivable, that in a world with magic, a progression of this idea beyond the expected manner makes sense.

We also get 5 detailed NPCs, including a minotaur oracle and northlander multiclassed characters. Beyond NPCs, we also are introduced to new monsters that include mimic-like beings masquerading as ships, shark-like fang drakes, the oil drake and the cute, if slightly disturbing one-eyed salt mouse that can drain salt from its opponents – not too impressive alone, but swarms of them…another matter completely!

It should be noted that all monsters come with great artworks and that we also get a fully mapped galleon (with top-down and side-view depictions) and a glorious two-page map of the Western Ocean of Midgard – sans the maps in this books, though.

Editing and formatting are good, though not perfect – I noticed a couple of minor editing and formatting glitches, but nothing too serious. The layout adheres to the beautiful 2-column full-color standard of Journeys to the West and the book comes bookmarked for your convenience. Both the maps for the 2 mayor islands and the ocean as wella s the original pieces of artwork are beautiful -especially for a web-enhancement-style support supplement not something I would have expected.

The team of designers Christina Stiles, Morgan Boehringer, Jarrod Camiré, Andrew Christian, Andrew Durston, Heleen Durston, Maggie Hoyt, Dawson Kriska, Chad Middleton, Christina Stiles, Matthew Stinson and Brian Suskind have created one glorious book here, one well worth the wait – this book brims with the biggest strength of Kobold Press – its myth-spinning, the glorious fluff, the sheer unfettered potential of ideas too iconic to ignore. Any campaign featuring islands, whether it be “Skull & Shackles”, “Razor Coast”, “journeys to the West”, “Savage Tide” – it doesn’t matter. This pdf and its ideas make for superb addition to any campaign that can potentially feature iconic islands. While here and there a minor glitch has crept in, the amount of unique and exciting places and ideas simply trumps all potential misgivings, makes this a joy to read and impossible to nitpick for me. Roleplaying games are, to be, more than anything, about ideas and creativity and any book that can incite m imagination like this did, deserves highest accolades – my final verdict will be 5 stars + seal of approval.

You can get this inspiring supplement here on OBS!