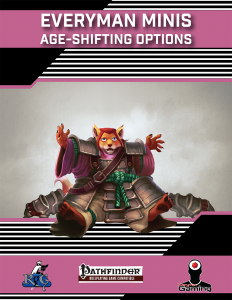 This Everyman Mini clocks in at 9 pages, 1 page front cover, 1 page editorial, 2.5 pages of SRD, leaving us with 4.5 pages of content, so let’s take a look!

Now, if the cover wasn’t ample clue, this does use the rules from Childhood Adventures, and it does recap the respective age alterations on half a page for your convenience. Furthermore, on the introductory page, we get 3 age-influencing hexes for witches: Lifespan Alteration makes a target within 30 ft. make a Fort-save or become the witch’s choice older or younger by a variable component equal to the target’s maximum age variation, to a maximum of one age category. The major variation can change multiple age categories, and there is a grand version as well, which doubles the rolled age modification and makes the effect instantaneous.

Okay, so the first archetype herein would be the agemorph shifter: These folks have proficiency with simple weapons and light armor and shields (excluding tower shields) and may use metal armor and shields. Wild empathy is lost, a thousand faces changed – the archetype gets change age at first level: The character gains the shapechanger subtype and may adjust her age category at will as a standard action, gaining all physical traits, including the physical aging modifiers (Childhood Adventures differentiates between physical and mental aging modifiers). 18th level allows this to work in conjunction with the a thousand faces ability, allowing for the assumption of any Small or Medium humanoid of any age category. Also at first level, we have agemorph aspect. The agemorph may assume her minor idealization for class level + Wisdom modifier hours per day, minimum 1, and the duration must be spent in 10-minute increments. 5th level and every 5 levels thereafter net an additional aspect, and at 6th level, when she gains the minor idealization of the aspect, she also gains the major idealization. Shifting into a new one ends all current major idealizations as well.

The 8 agemorph aspects from infancy to venerability have three components: As noted, the minor and major idealization, and the embodiment – the latter would be the feat or option you get when using martial flexibility in conjunction with this. Minor nitpick: The “Minor Idealization”-header isn’t correctly bolded in the rules-explanation. Infancy allows you to crawl at full speed as embodiment, and the major idealization prevents you from being directly targeted or harmed, and you are considered inoffensive…until caught. Toddlers get pretty massive, scaling initiative boosts and better aid another, etc. – others are a bit more straightforward and provide numerical boosts.

But back to the agemorph: Instead of shifter’s claws, we get Improved Unarmed Strike as a monk, with scaling DR-ignoring, and 7th level nets Two Weapon Fighting, 11th and 13th level provide the Improved and Greater version, and 17th level upgrades critical multiplier of unarmed strikes to x3. 3rd level unlocks the embodiment bonus of the idealization, and 4th level nets martial flexibility as a replacement for wild shape, with class levels as a brawler -4 levels…so…0? That probably should be -3. The chimeric aspect ability array and timeless body are replaced at 9th level with agemorph other: Standard action melee touch attacks, save or have the age category changed. 14th level makes the duration longer and 19th, permanent. Pretty sure the latter should be an option – there will be instances when an agemorph doesn’t want to permanently age targets, so an having the choice here would have been nice.

The second archetype herein is another massive one – the geronkineticist. The archetype is locked into water, wood or void as primary element and must choose either life blast (? Pretty sure that this should be “Positive Blast”) or negative energy blast (void) as first simple blast. They are also locked into water, void or wood as expanded element. All blasts of the archetype only affect living creatures and do not affect creatures immune to aging. That’s a serious drawback, so let’s see what the archetype has: 1st level and 9th level infusions are replaced with geronkinetic infusions: The geronkineticist gains either aging or regressing infusion at first level, the other at 9th level. Before we move on, let’s take a look at those two, shall we?

Both are level one substance infusions, with negative energy, positive energy and water as the associated blasts. As a nitpick: The rules-reference formatting of these is not correct – they should be referred to as positive blast, water blast, etc. Fortitude negates, and they have a Burn cost of 1 or more. These blasts duplicate the lifespan alteration hex (younger or older only, respectively), and 10th and 15th level upgrade that to the major and grand hex-equivalents, respectively – for 1 additional (major) or 2 additional (grand) points of burn.

But back to the archetype: Instead of elemental defense, 2nd level nets a +1 untyped bonus to saves vs. poison, disease and all effects that allow for subsequent saves to shake them off on following rounds. By accepting 1 point of burn, you can increase this bonus by +1 until burn is removed “to a maximum bonus equal to your kineticist.” Pretty sure that a “level” has gone missing. When accepting burn while using a void or wood [sic!], you get class level fast healing for Constitution modifier rounds. Okay. What? Void or wood what? And why doesn’t water gain anything? Also at 2nd level, we get change age, somewhat akin to the agemorpher, with minimum and maximum age scaling – this replaces the second level utility wild talent. The capstone nets aging immunity and immunity to aging effects she is an unwilling target of. The aforementioned, somewhat opaque fast healing upgrades to regeneration, which is lacking any suspension criteria – whether intentional or not, I’m not sure. Aging or regressing blast can, via 1 point of burn, be made instantaneous instead of permanent. When she dies, she reincarnates as the spell (which is not properly italicized) and rapidly ages to Youth in 3d6 days; during this time, a creature is geas’d to take care of her.

Editing and formatting are okay on a formal and rules-language level, but not as tight as usual for the authors or Everyman Gaming; some of the hiccups did influence rules-integrity. Layout adheres to the series’ two-column full-color standard, and the pdf has a nice artwork. The pdf has no bookmarks, but needs none at this length.

This is a bit heartbreaking for me – Sasha Hall & Alexander Augunas have crafted two complex and intriguing, creative archetypes I really wanted to love, but that also stumble a bit in the details. Not to a game-breaking extent, but still significantly enough to affect direct functionality. That being said, if you’re okay with aforementioned snafus, then this offers two inspiring options, and, let this be stated clearly, they both are seal of approval candidates that only got downrated for the hiccups mentioned. As such, my final verdict can’t exceed 3.5 stars, rounded down.

You can get these interesting, if a bit rough archetypes here on OBS!

Missed the excellent Childhood Adventures? You can find that book here!

If you’re enjoying my reviews, please consider supporting my patreon.