The Haunting of Larvik Island (DCC)

The Haunting of Larvik Island (DCC) 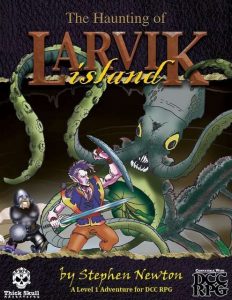 This module clocks in at 34 pages, 1 pages of front cover, 1 page editorial/ToC, 1 page of SRD, 1 page back cover, leaving us with 30 pages of content, so let’s take a look!

All right, so this is a module for first level characters, and the second adventure that was once intended to be a part of the Princes of Kaimai-storyline, which seems to have been discontinued. Fret not, though, for while the module’s aftermath is intended to provide an angle towards these mystical lands, it is really easy to disjoint the module from this angle.

This module comes with not one, but 6 different hand-outs that basically can be considered to be look-see artworks/game aids, and the module does feature some solid b/w-maps. Speaking of which, there is one component that this does better than 99% of DCC-modules: It is EXTREMELY VTT-friendly and judge-friendly. You see, the module comes with a massive encounter map-pack that sports full-color maps that come as 9 different player-friendly, unlabeled maps; additionally, there are individual pdf-versions of the maps, blown up for use as battlemaps – yep, you can just print these out. That is awesome. Beyond that, the encounter map pack has 4 different player handouts. As far as supplemental content is concerned, there are very few modules that sport this level of support. Huge plus!

Anyhow, as far as DCC-modules are concerned, this actually a relatively tame adventure – while it can be deadly, it is a very doable adventure. Genre-wise, this is one of the rarest modules out there – we have basically a straight-forward treasure-hunt on our hands here, with the island itself presented as what amounts to a point-crawl: There are several key-locales on the eponymous Larvik island that come with their own maps as the PCs explore the place. Another uncommon aspect: As far as DCC-modules are concerned, this module is actually pretty grounded in its aesthetics. The characteristic Appendix N-elements are present, but less in your face than usual for DCC, which, as far as I’m concerned, is a nice change of pace. It should be noted that, yes, this does come with read-aloud text, including lines provided for encounters while exploring the island.

All right, only judges around? Great! So, Larvik Island, ostensibly the last resting place of the fabled explorer, is rather peculiar: Littered by flooded caverns, every 35 years, an oddity in the tidal currents drains the caverns of sea water. Known as Cybala’s Rest, the phenomenon lasts for 2 weeks, allowing the brave and foolhardy their chance to attempt to claim fabled Larvik’s legacy.

It’s this time once more, and thus the PCs venture forth to claim the fabled legacy of Larvik. On the island, we have a small population of island goblins and animals, and a nasty group of bandits makes for a cool “evil adventurers”-type of foil for groups; massive crabs and giant pestrels are some of the more creative weird animals here, and indeed, while there is a readily apparent cavern that is a prime candidate for the treasure’s location, it actually is a false cavern – requiring rappelling from the island’s vast cliffs, it houses the squidopedes (as seen on the cover – awesome, classic-style monster) as well as the rage incarnate of the spirit haunting the island.

You see, beyond the dangerous local inhabitants and fauna, the PCs will have the chance to find some interesting clues and encounter the living dead in the swampier regions of the island. At one point, an evil cleric named Mattor once tried to claim the treasure, but perished in the process – his rage incarnate is a particularly nasty spirit with deadly claws and sample curses to spew at the adventurers provided – and it can’t be put to final rest until the PCs found the vile cleric’s true body.

Very cool: There are strange idols and the like to be found, and obelisks – the PCs will need to piece together the names of Larvik’s offspring and bride (who hailed from Kaimai); said information can help them bypass some of the magical security mechanisms provided, and the true cavern’s locale actually has to be triangulated (no, the players don’t have to do the math…) by using the unearthed information in a clever way. The true cave contains the most deadly creatures in the adventure, the means to put vile Mattor to rest – and several helpful pieces of advice for depicting the rising tension: A slowly looming end to the phenomenon of receding water, earthquakes and the like amp up the tension in an admirable manner. Mattor’s remnant, once put to rest, has, alas, wrought damage to Larvik’s mythic device, which means that operating it may well be rather dangerous – there are a few different options to handle the machine.

The pdf concludes with a section of advice on continuing from there, a glossary of deities and NPCs, two magical diseases and 2 magic items – one of them being a magic flail infused with fear, the other a magic conch shell.

Editing and formatting are very good on a formal and rules-language level. Layout adheres to a two-column b/w-standard, and the pdf comes with solid b/w-artworks. The cartography is b/w, and the map-pack provides full-color versions, player-friendly versions, etc. – huge plus! The inclusion of b/w-handouts is another plus. On the downside, the module does lack bookmarks, which constitutes a comfort-detriment.

Stephen Newton’s trip to Larvik island is a great treasure hunt – dangerous and wondrous, yet grounded in quasi-realistic aesthetics, this module proved to be a rather awesome surprise for me. There are few modules that attempt to be smart sandboxy and wholly player-driven explorations focused on finding a treasure. At least if you discount “Enter a dungeon, kill everything.” This module actually feels different in its neat execution of the treasure hunt-angle, and its blend of subdued and strange aesthetics hits a neat sweet spot for me. While the lack of bookmarks is a bit of a pity, this is still very much a module I’d recommend, and indeed one I’d consider worthy of conversion beyond DCC if you’re looking for something different, yet not too outré. My final verdict will clock in at 4.5 stars, and due to the excellent map/handout-support, I will round up and bestow my seal of approval on this module. Well done!

You can get this unconventional, cool module here on OBS!

The FREE map-pack made be found here!

If you’re enjoying my reviews and want to see more, please consider donating to my patreon here!