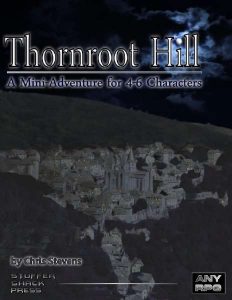 This FREE mini-adventure clocks in at 16 pages, 1 page front cover, 1 page editorial/ToC, 3 pages of advertisement, 1 page back cover, leaving us with 10 pages of content, so let’s take a look!

Now, this adventure was created to highlight the companion-pdf for this little module, the “Truly Terrifying vampires”-pdf. It should be noted that you do not need this pdf for the module to work properly.

As a system neutral adventure, the module lacks any stats, information regarding general difficulty or the like…at least not for the most part, for the adventure does need to reference a couple of rules, courtesy of its plot. More on that later. The adventure features copious amount of well-written, and somewhat grisly read-aloud text. On a formal level, the way in which read-aloud text is presented isn’t too convenient: We have a bolded statement to read or paraphrase the text, followed by the read-aloud text. When a character speaks, as opposed to the GM, the text is additionally italicized. Just making the read-aloud text boxed text would have made the distinction of what is and isn’t read aloud text slightly clearer.

Thornroot Hill, as such, is a small, xenophobic hamlet, and the module begins with bandits accosting the PCs. Anything beyond that, and I’m going into serious SPOILER-territory. Potential players should jump ahead to the conclusion.

Only GMs around? Great, so this small adventure hinges on a gimmick. The PCs will meet a man named Buckley Topper, and his servant Lorne Westwood, as they’re invited for a little feast, before the NPCs go to bed. Here’s the thing: The PCs have been drugged. That’s the first thing you need to pull off, and it’s not that easy, considering the amount of magical and alchemical detection options available to PCs in many games, much less their paranoia. I know that not all of my players would have partaken in the meal…or that they’d have stuck to their own rations.

Anyhow, the module interrupts the sequence of events with a fragmented retelling of the last victims of the pair of murderers, for the PCs have unwittingly eaten their flesh during the meal, generating a conduct of sorts with the deceased. The module simulates these pseudo-characters with a 2 1d10 rolls, one for a descriptor, and one for a profession. While the idea of living through the final moments of these unfortunates is certainly spine-.chilling and well-presented, it is, in effect, an extended cut-scene, a gigantic monologue wherein any regular player agenda is utterly and thoroughly suspended. Nothing they do here, nothing they RP, has any consequence.

As the proper PCs awake after these horrid visions, they will have ample reason to attempt to put the killers to justice, but at this point, the system-neutral component of the adventure becomes even more problematic. The PCs witnessing the visions is already predicated on two decisions: One, they have to eat, and two, they have to succumb to the drug/poison. Considering that quite a few classes and races and characters have resistances or immunities to the like, this may be problematic. I mentioned before that rules would be required: The resistance to poison kicks in with the tactic of the delayed poison save – call for it, when its effects would kick in; here, after the visions. Thing is, the visions could already be construed to be effects. The precise effects…need to be determined by the GM. There is another issue here: If your game contains divine casters with strict requirements regarding moral fortitude, paladins and the like, then partaking in human flesh, no matter if that was intentional or not, may see them stripped of their powers.

In short: the adventure hinges on the PCs NOT being paranoid, without providing failsafes for the GM to fall back on; and, indeed, the module penalizes the PCs for not being paranoid. I know that I’ve seen this gambit pulled off more than once, and a railroad that leaves PCs in peril is one of the most overused and loathed horror narrative devices. Players need to be able to get their PCs into trouble on their own, out of their own accord. Anyhow, this very, very linear structure is exacerbated by the massive de-facto-monologue that characterizes the middle of the adventure, where the players are basically stripped of any meaningful agenda.

Now, while design-wise, I consider this to be structurally a failure, the prose and general creepiness of the adversaries somewhat makes up for that.

Editing and formatting are good, apart from the formatting that could have been tighter, I have no serious complaints. Layout adhere sto a 2-column full-color standard with stock photography and artwork. The pdf comes bookmarked in spite of its brevity, which is a plus.

Chris Stevens can write good horror – that much is apparent. The flavor, in spite of the lack of maps and the like, is tight, and the atmosphere evoked is grisly and interesting. At the same time, the module really suffers from its attempt at being system neutral, which undercuts the sequence of events regarding rolls required, etc. It also is needlessly railroady in its middle part and significantly undermines the ability of players to choose the fate of their PCs, with the very kick-off requiring some serious GM-mojo to pull off if the players are not total newbies. There is, as written, a very high chance that the module will simply not work as presented. That being said, the adventure is FREE, and as a free supplement, it may be worth checking out for the nice prose. That being said, my final verdict cannot exceed 3 stars.

You can get this module for FREE here on OBS.