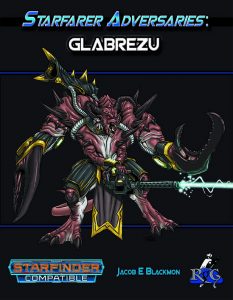 This installment of the Starfarer Adversaries-series clock in at 7 pages, 1 page front cover, 1 page editorial, 1 page SRD, 1 page advertisement, ½ a page empty space, leaving us with 2.5 pages of content, so let’s take a look!

All right, so there are three glabrezu statblocks in this supplement – the lesser glabrezu clocks in at CR 9, the regular one at CR 13, and the glabrezu demon lord at CR 17. The lesser one may be called forth with a 4th-level summon monster, the regular one with the 5th-level version, just fyi. The neat artwork we can see on the cover is reproduced as a one-page spread within this pdf.

The builds employ the combatant array and present pretty deadly foes, with the glabrezu’s multiattack being capable of dishing out really nasty amounts of damage – which, considering the tradition of the creature being an upper-echelon damage-dealer, suits me just fine. Being a relatively early release for Starfinder, there are a few cosmetic hiccups to call out regarding the notation of spells that exist in various spell levels – Roman numerals have been employed instead of Starfinder’s usual notation. Similarly, damage types inflicted are written fully instead of using the one/two-letter abbreviation, but that is cosmetic at best. A +2 boost to Fort-saves from the outsider graft has been properly implemented, and the builds list spaces and reach correctly. Somewhat to my chagrin, the lesser and regular glabrezu lack ranged attack options – which, however, may well be an intentional design decision, considering their melee-shredder build.

Slightly more relevant and annoying would be that not all spells that should have it, do note their DCs – e.g. force blast is missing it. It should be noted that the builds makes use of spells from the Starfarer’s Companion, which is relevant information if you’re like me and have banned parts of that book.  The lord-version of the glabrezu comes with a called dispelling unholy artillery laser that has its formatting somewhat odd – it lists “unholy” as part of the damage – and there still is no unholy damage in SFRPG. *sigh* On the plus-side, we have the cybernetic template graft added to the fellow, which here means that the fellow also has a zero-cannon! Cool! (I’ll punch myself for that one later…)

Editing is generally precise on a rules-language and formal level, but there are a few minor snafus among the formatting conventions to be noted. Not to the extent where they impede functionality, but they’re here. Layout adheres to the series’ two-column full-color standard, and the artwork provided for the CR 17 critter is cool. The pdf has no bookmarks, but needs none at this length.

Jacob Blackmon delivers some solid glabrezus to tear into your PCs here – the damage-output of the demons is pretty solid, and as a whole, I enjoy how he went the extra mile with the highest-CR-iteration. At the same time, the melee focus and minor hiccups in statblock formatting conventions might upset some, which is why I’ll settle on a final verdict of 3.5 stars, rounded down.

Missed the Starfarer’s Companion? You can find the tome here.

Enjoying my reviews? You can help me write more of them by supporting my patreon here.