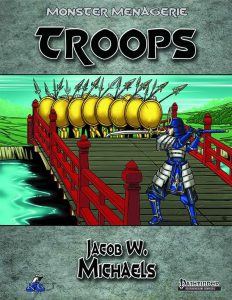 Okay, let me state something from the get-go: I LOVE the troop subtype. I always hated that mobs of low-level commoners and soldiers sucked so much and the troop subtype keeps these low-level threats viable and simulates the “advantage in numbers”-aspect. As you may have noticed, I tend to enjoy a somewhat gritty and high-challenge playstyle and troops help immensely in that regard – hence, I’d be lying if I said I didn’t look forward to this pdf. But what exactly do we get?

Well, we start with a full recap of the troop subtype, which is really appreciated and from there, move on to the CR 9 centaur warband…and here, you’ll notice that, yes, these troops have a plethora of signature abilities: The centaurs, for example, can deafen foes with their thundering approach, rain AoE arrows on squares at range and even heal on the fly – amazing and adds some serious depth to the troop!

Eternal misfits and mascots of PFRPG, the gleefully inept goblin raiding party at CR 5 is fearsome to behold: They can fire the looted belongings of homes as ranged, fiery bombardments and their goblin war chants (see Pathfinder #1 for a sample…) bolster morale. Of course, they’re goblins and thus, much like Warhammer’s morale checks, they have a chance of…not behaving exactly as planned, with the chances of gobbos wandering away…and yes, that is a level 1 boos fight I’d love to run: PCs using their guerilla tactics to draw gobbos out of formation? HECK YEAH!!

Perhaps you’ve been playing Way of the Wicked and arrived at book #6. If you’re like me and have serious doubts that the PCs will encounter an appropriate challenge (GMs of book #6 know what I’m talking about…) – then may I introduce the heavenly host? At CR 18, the armies of Mount Celestia can unleash channel energy…and with Alignment Channel and Channel Smite as well as their protective capabilities, they are one incredibly tough nut to crack and showcase well why the heavens haven’t fallen to the demonic or infernal hordes.

We’re not even close to done. CR 17, all amazing: May I introduce the legion of the damned? Oh boy, if you thought undead lost their scariness at high levels, think again: These fellows can beckon black tentacles-like corpse hands from the ground to ensnare foes; their very TOUCH causes the loss of Con and, sadistically, the save to end it is Fort. Worse: Their miasma hampers healing and they LITERALLY can’t be stopped by anything in their inexorable march. Imagine me grinning my most sardonic, sadistic GM-smile right now…

At CR 6, a mite rumpus is driven by hatred for gnomes and dwarves and may fire volleys of darts (with a nice cooldown mechanic)…oh, and their SPs…are really hard to break and they actually doom those nearby!

At CR 7, the classic peasant mob is not missing from the file either…and they gain strength/heal when reducing foes to less than half HP, hurl torches and may swiftly demoralize and ever scare away foes…oh, and their defense is better than you’d expect. Love them! The same CR, just fyi, would be the secret police squad that it perfect for a crackdown on low-level PC’s illegal operations – with improved chances to resist being lied to and the ability to take foes alive and secure targets, they make for an amazing storytelling tool. Huge kudos!

The CR 11 sahuagin frenzy inherits blood frenzy and adds steal to those damaged, pillaging the unfortunates that stand against them. With ranged volleys and the ability to speak with sharks, we have a nice, concise troop here as well.

Wanna go full-on Isengard? Cr 15 Treant Grove. ‘Nuff said. Oh, okay, just because I love you folks: These guys can hammer down with crippling blows (Str and Dex damage on failed saves) and their entangle actually damages those caught in it. And oh boy, don’t you want to be in an edifice that has offended the radical trees…and no, you also don’t want to find yourself in a position where you run from them in a forest. PAIN, I tell you!

For fans of the creepy or the playful at the same time, the CR 1 toy soldier brigade plays well with the classic Ravenloft-modules. These guys can duplicate a variant of entangle that may knock you prone, are experts at disguising themselves…and, being (toy) soldiers, they are disciplined: Huge plus: Construction notes included!

At CR 15, the warparty of the Fell hunt would be a take on the classic wild hunt trope, but with an emphasis on the cold – -with icewalking, weapons of ice and phantom steeds, they make for a deadly foe…and they have a nice weakness savvy players can exploit.

My heartfelt congratulations to Jacob W. Michaels! At this point, I have seen a metric TON of critters and, in spite of my admittedly pronounced soft spot for troops, I am also an incredibly spoiled bastard: LG’s Mythic Monsters-series, for example, has set the level of what I expect originality-wise from monsters very, very high. This delivers. BIG TIME. I am not kidding when I’m saying that this is, hands down, my favorite book in the whole series AND my favorite book from Jacob’s pen. This is one amazing, no filler, all killer monster book – even old concepts like the hunt get their unique twists. The builds are challenging and cool and inspire by their very rules. This is, in short, excellence. The only reason this is not a Top Ten candidate is that it’s too short – I want MOARRR!!! Feed the greedy reviewer-prick! Kidding aside, this is a must-own book. Get it. 5 stars + seal of approval, given sans hesitation or complaints!

Amazing collection of evocative troops! Get them here!