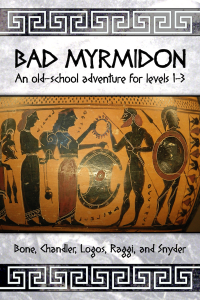 This module clocks in at 52 pages, 1 page editorial, 2 pages of SRD, 1 page encouragement, leaving us with 48 pages of content. These have been formatted for booklet-size (A5 or, approximately 6” by 9”), which means you can fit up to 4 pages on a given sheet of paper. I tried it and the text remained legible. The PoD-version sports the hex-map, which in the pdf is inside, on the back, in color.

Why encouragement? Well, yes, this module was originally penned for the benefit of Mandy Morbid, with artwork by Gennifer Bone and Wayne Snyder, cartography by Dyson Logos and content mainly by Rafael Chandler, though James Edward Raggi IV did write one of the hexes.

It should be noted that this module is intended for adults and sports some non-graphic, but pretty explicit descriptions. Easily offended folks should probably not play this.

All right, that out of the way, this module takes place in a weird and fantastic Greece, setting-wise, to be more specific, the island of Leuke. Fans of NGR should have a relatively easy time adapting this. Rules-wise, we have descending AC, HD notes instead of THACOs or the like and saves orienting on classes – “saves as fighter” – you know the drill. Whatever OSR-system you’re using, you should have a pretty easy time using this booklet.

Now, this is, to an extent, the story of Achilles and Penthesilea…or rather, it’s aftermath. In order to explain more, though, I’ll have to go deep into SPOILER territory. Potential players should jump to the conclusion.

All right, only referees around? Great! Achilles fell in love during the Trojan war, but Agamemnon took his “maid” and he subsequently decided to ditch the war – Patroclus disguised as Achilles fought the war…and Achilles was pretty happy: All the glory, none of the risk – what’s not to like? Patroclus, however, died and Achilles, not the bravest and a pragmatic, took a gazillion of magic items and defeated Penthesilea. After the war, he spread his artifacts in certain safe-houses, temples if you will – guarded by his faithful disciples…who are every bit as cowardly and pragmatic as Achilles himself. Leuke is the place of such a temple.

The first part of this module would be a hexcrawl and it serves to introduce the messed up power-struggle the PCs find themselves in: You see, the myrmidons of Achilles are under attack – the amazons have come to wreak bloody vengeance upon them. Worse, Penthesilea and her sisters all have returned as undead and have no compunctions slaughtering anyone in their way. Exploring the hexes of this island, the PCs can find a colony that practice a combination of polyamory, ritual mutilation and rhaphanidosis. If you don’t know what the latter is…I did. It’s…unpleasant and a picture that’s hard to exorcise from one’s head. Quasi-mythological creatures like hawk-boars that well could have existed, animal/human hybrids, strange totems and more can be found: A maddened settler leader responsible for a massacre, GIs that fell through time and space, blood-vines and a murderous sword containing the soul of Polyxena are just some of the things PCs can encounter – have I mentioned the demon lord in love with a furrier? The hex that is the disorienting playing ground of a trickster god? The ancient sorceress awaiting reincarnation into one of her daughters…and torture. Demons, myrmidons, amazons – if it moves, it may well deserve being run through…this is a hell-hole of an island.

The most gleefully disgusting bastard would be a greasy, fat old man, ostensibly a priest, who prides himself in having broken his “brides for sale” – even if the PCs agree to pay his price, he wants to watch the consummation of the marriage…and if the PCs go through with it, they’ll get massive bonuses…but either way, if the PCs are halfway decent beings, they’ll run the sod through and nurse the brides back to health…and guess what? That’s a really, really smart move: These characters are actually damn strong assets! (as in: the lowest level is 9th…) Speaking of not all being as it looks: There actually is a lich-demon, who f not slighted, is really helpful and benevolent! Have I mentioned the hag that slaughtered a village and is now selling bread made from the ground bones? Told you: Hell hole.

And no, I have not even begun listing every hex’s unpleasant surprises! The second part of the module would be the exploration of the temple of Achilles, a 26-room-dungeon, where the behavior of myrmidons and the truth of Achilles’ behavior can be unearthed by the PC. If they are not killed by Talos…and if they can get past the deadly traps. Heck, they may even be warned if they can decipher an anagram that may provide the clue to defeat Penthesilea…if they do not run afoul of her sisters. Oh, and tinkering with magic can be…unpleasant. Reversed gravity and collecting floating platinum pieces may have dire results. Have I mentioned the gravity/time-distortion. The leader of the myrmidons is avoiding death at all costs, like his idol…ostensibly until the PCs find his craven behind…for, ultimately, all of these guys and gals probably make even hardened murder-hobos look like shining paladins…

Editing and formatting are top-notch, I noticed no issues. Layout adheres to an easy-to-read one-column b/w-standard with over-the-top b/w-drawings – and yep, the amazons often are scantily clad or nude, but depicted in a very cartoony manner. The pdf per se has no bookmarks, which would constitute a comfort-detriment…however, Dak Ultimak contributed actually a version with full and excruciatingly-detailed bookmarks. The cover and hexcrawl map in color are included as high-res jpgs. We don’t get a player-friendly, key-less version of the dungeon-map, which is a comfort-detriment.

So, Rafael Chandler has written a nightmarish vista of a truly vile place in a mythological Greece…that is pretty much all killer, no filler. This is really dark, but it is dark in a winking, gleeful manner. The oddball and weird components serve as nice counterpoints and there is another thing: It has seldom felt so good to murderhobo. I’m big into roleplaying solutions, investigations, the like. Here, saying “Fuck it!” at one point and just killing off everyone felt actually rather justified. There is no gray area here, no doubts – just vile bastards that need a good whacking with the pointy end of the muderhobo stick.

If you’re looking for a really dark and messed up, but also really fun old-school module, however, then this delivers in spades.

Oh, and it’s FREE. Not even PWYW, but FREE. It’s really, really hard to argue with that price, particularly considering the quality of the module: In sheer content, creativity and professional depiction, this blows a lot commercial modules completely out of the water. So get it NOW! Better yet, there is a PoD-version for at-cost printing. I kid you not. I actually got it. Because I enjoy this blend of the messed up and creative and because I had a glorious time running this. It’s not for everyone, sure, but if you like LotFP, DCC, etc., then this is definitely worth checking out.

Again, it’s FREE. And better than many, many commercial modules. Even just for hacking hexes or scavenging dungeon-rooms/traps, this is well worth taking a look at. This would, even if it wasn’t free, probably rank at 4.5 or 5 stars on my scale – as a FREE offering, it represents one of the best free books I have ever had the pleasure to review. My final verdict will hence clock in at 5 stars + seal of approval.

You can get this amazing module FOR FREE here on OBS!

Want this in print? You can get it for a very low price here!