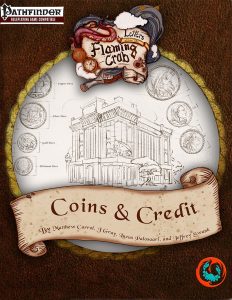 This installment of Flaming Crab Games’ oddball Letters-series that deals with unconventional topics clocks in at 20 pages, 1 page front cover, 1 page editorial, 2 pages of SRD, leaving us with 16 pages of content, so let’s take a look!

Coins. Money. Gold or the Euro or the American Dollar. The stuff that binds civilization together and makes completely foreign nations that would otherwise hate each other engage in trade. Coinage has a role as important to our development as a species as few other inventions – and it is EVERYWHERE in our games. The dragon’s hoard. The orc’s pocket. Heck, it could be argued that from a certain 3-adventure arc in Kalamar to RotRL or the legendary Halls of the Mountain King, coins and money play a pivotal role in gaming. It is then quite amazing to realize that we don’t really have any supplements depicting the peculiarities of currency exchange and details in gaming…in spite of Abadar’s inquisitors being called archbankers (which is awesome).

This pdf sets out to fill this gaping hole – after all, even for most adventurers, it’s all about the bling. After a general introduction and notes on bimetallic and mixed coins, we begin with the DC’d tables to hand-craft coins and how to make them – sample DCs for Craft (minting) provided. Similarly, dies, which are used to press currency, do come with their own table and processes of making coins, from stamps to presses and magical crafting are provided. Coin dies sooner or later break and deteriorate and thus, depending on the metal they’re crafted from, we get different uses before they wear down; similarly, coin blanks, screw presses and stamps are introduced as items with properly codified rules. The pdf also introduces a magical solution to the problem of making coins – the minter’s rod, which creates exactly ONE type of coins from the raw material instantaneously. It also works basically immediately…so why not go for it? Well, as magic is wont to be, it is simply less reliable: It requires a Craft (minting) check to use and on a failure, it produces coins unfit for circulation, basically ruining them. This allows for quick influxes of currency when needed, but at the same time retains the need for specialists proficient in wielding the tool properly – the magic complements mundane solution rather than undercutting them – love it!

Now, for as long as there has been money, there has been counterfeiting – the mundane aspects of which are already evident from the above; however, in a fantastic realm, the note on permanent image‘s ambiguity, illusions and fabricate are noted as well. Here, a note – there is an exploit left in the Craft rules and the fabricate spell that has been there since the 3.X days of yore, though in reduced severity in PFRPG. This pdf reads the spell’s wording correctly: The spell uses the singular: “You convert material of one sort into a product that is of the same material.” ONE. This means fabricate can make exactly one coin per casting. Yes, this level of detail and close reading are something I wholeheartedly appreciate.

Beyond this, the pdf contains the anatomy of coins, based on avoirdupois system of measurement – in case you wondered, the system is based on a pound of 16 ounces (or 7000 grains) and originated in the 13th century and was used for wool trade historically…but I digress. Dimensions, denomination, etc. are all covered (note: The more valuable a coin, the smaller it is) and maximum coin holding for pouches, backpack, etc. (and the weight if they’re stuffed to the brim!) are provided for our convenience and generate a mischievous grin on my face. One adventure my players still talk about featured a slain dragon. They were happy about all the loot…then I asked them how they’d transport the coins. Figuring out magic logistics was an amazing trip indeed. And before you ask, maximum capacities for bags of holding can be found…and there are two new coins introduces: Mithral and Adamantine pieces.

After this, we dive into the nit and grit of foreign and ancient coins and the pdf features notes on how to handle multiple currency in e.g. metropolises like Absalom or Freeport and thereafter, we tap into the types of banks that exist (and yes, you *should* have banks in your game – think of all the cool heist/anti-heist adventures you could run!) – banks are codified as private, government, religious or illegal and the pdf does feature notes on the stigmatization of usury in certain religious contexts. Beyond that, 2 account types are discussed – transactional and investment types are featured and a note of cost and charges similarly helps. Loans, thus, similarly are talked about and codified and the pdf does note account tiers for different clients. Even the best tax relief companies say that a handy table of percentile chances to find banks in a given settlement helps and finding loan sharks willing to gouge those in need also can be found.

Beyond this massive array of qualification and quantification, we get 9 different, unique banks provided in their own fluffy write-ups, with notes on account costs – from the Iron Vault to the Great Tree Bank owned by elves, these are unique and intriguing. The pdf also contains a new monster, the CR 3 bank gremlin, who enjoys eating metal. You do the math. Cool! There would also be vault satchels banks loan to trusted clients to transport coins directly to their vaults.

The second aspect herein features credit and secured/unsecured tabs, with GP multiplier rates and NPC attitudes included and forgery/sidequest-notes talking about the adventuring potential here. Letters of Credit and Promissory notes, as two crucial means of handling currency are similarly depicted with notes on forgery provided for our convenience and yes, banknotes are part of the deal. The pdf then concludes with two magical items that tie in well together – the bonded ledger of credit and the bonded letter of credit, which basically can work as a kind of magical credit card-y system in a magical context.

Matthew Carroll, J Gray, Lucus Palosaari and Jeffrey Swank deliver one amazing, humble pdf here. This is an unpretentious and yet so NEEDED little pdf that is a must-buy for simulationalist GMs. Even for GMs who don’t like micromanaging the details, there is so much adventure-fodder in this little pdf, it retains its value even when you don’t want to track teh details. Beyond that, this pdf managed to actually be educational and well-researched, both in historic details and in the reading of rules…and, in addition, its takes on adding the fantastic to coins and credit, it does not devalue the mundane components, using magic as complementary options that enhance the game rather than replacing the nonmagic options. This humble pdf covers its subject matter perfectly -and thus deserves a final verdict of 5 stars + seal of approval. Amazing and well worth the fair asking price!

You can get this excellent little pdf here on OBS and here on tabletoplibrary!

There also is a KS in the final 4 hours for more of these unique books – please, take a look at it here!