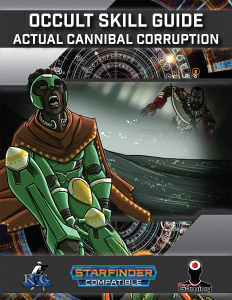 This installment of the so far absolutely amazing Occult Skill Guide-series clocks in at 9 pages, 1 page front cover, 1 page editorial, 2 pages of SRD, leaving us with 5 pages of content, so let’s take a look!

So, on the introductory page, we already have something I genuinely enjoyed seeing, namely a more diversified take on addiction. As you all know, Starfinder treats drug addiction as a disease that progresses each time a drug is taken. Which, come to think of it, doesn’t always make sense – addictions certainly develop when a drug is consumed, but withdrawal effects occur from abstinence, and not indulgence. As such, the pdf presents a variant for addiction as a disease (drug use). Save and track are specified by the respective drug, while the effect is as follows: Every 1d6 days, the victim must attempt a saving throw against the disease, with the DC equal to the drug the victim is addicted to, +2 for every time the victim consumed the drug within the last 7 days. On a failed save the victim progresses from the latent to to impaired, to a maximum of weakened. Each hour, the victim attempts a new save progressing to the next step on a failed save. This continues until the victim uses the specified drug or succeeds on 3 consecutive saving throws, after which the addiction reverts to the latent stage for 1d6 days.

Each addiction starts as a minor addiction, and on 3 failed consecutive saving throws, progresses to moderate,, and after that, we reach severe. These have new maximum steps to progress to. Cure is noted as well. This is pretty elegant, in that it presents a frame-work that is easy to tweak – the cooldown in days, the penalty to the DC – all components that can be tackled on their own. Plus, for gritty games, this allows you to portray the effects of addiction decoupled from individual drugs, or in conjunction with individual drugs. Speaking of which: This framework does work smoothly in conjunction with the awesome item-level scaling drug-rules presented in the phenomenal Pop Culture Catalog: Vice Dens.

Now, as before, this is a stand-alone book: All the rules required to introduce corruptions into your game have been provided in this pdf, and since I’ve explained them already, I will refrain from doing so again – suffice to say, they are damn cool, one could call them…addictive. See what I did there? 😉

The Cannibal corruption is associated with Will as save and Wisdom as the relevant ability score modifier, and the source is obvious here: The target has partaken in sapient flesh of their own race, either willingly or unwillingly due to wendigo psychosis or sadistic compulsions. As far as save DCs are concerned, they scale with the corruption’s victim’s level and start at DC 13 and progress to 19, with each stage tracking its save DC increases separately, making the progression per se less burst-like and more steady.

Wait. You don’t have rules for wendigo psychosis? Well, guess what! We have a unique simple template graft to create wendigo creatures, including howl, properly codified airwalking (based on a supernatural equivalent of force soles) and the psychosis codified as a proper curse! But let us get back to the corruption: You progress through it whenever you consume sapient (properly-codified, fyi!) meat – 1d6 corruption points; if the target consumed is of your own race, it’s 1d20 corruption points for you! The latent stage also nets an addiction to consuming the flesh of creatures of their own race, and latent stage nets Cannibalistic Euphoria – which provides a bonus to an ability score of your choice for 10 minutes, which doesn’t stack with augmentations whenever you consume flesh of your own species. Higher corruption stages increase this bonus. At this point, simply abstaining from meat-consumption for long enough (provided the addiction lets you!) suffices to cure this. At Stage 1, consuming flesh of your species also heals you with a scaling mystic cure, with higher levels and corruption stages also adding remove condition/affliction to the roster of benefits. Sure you want to get rid of this?

Stage 2 nets you proficiency with entangle, grapple., gravitational, mire, throttle and trip weapons, or +1 to atk or save DCs/skill check DCs related to them, if you already are proficient…gotta hunt your meat, Hills Have Eyes IN SPACE!!!-style. At stage 3, only death and a proper cleansing ritual before resurrection may revert the horrific corruption the character has underwent. This also provides some serious benefits – including skill ranks, bonus feats, and means to stay in the fight – basically, at this point, you’re almost Jason. And before you ask, yes, the rules of the corruption are presented in a way that lets you apply it to NPCs without much hassle.

Editing and formatting are top-notch on a formal and rules-language level. I noticed no glitches. Layout adheres to the series elegant two-column full-color standard, and the artwork featured is neat, and an original full-color piece. Kudos: The pdf is fully bookmarked in spite of its brevity.

Alexander Augunas’ cannibal corruption kicks behind and takes names; the entire Occult Skill Guide series so far has been nothing but a joy to review, and this is is no different. Corruptions are an amazing concept, and how the author manages to portray the lure that their powers offer, while contrasting them with nasty detriments, is awesome. This is role-playing gold, and I seriously recommend getting all of them, particularly if you’re as excited as I am for e.g. Grimmerspace, for which these pdfs imho make a natural fit. All in all, a great offering, well worth 5 stars + seal of approval.

Missed the brilliant pop Culture Catalog: Vice Dens? You can find it here!